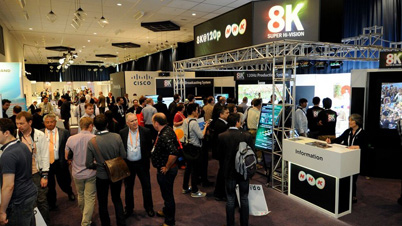 This year’s annual tech gathering in Amsterdam has an ambitious agenda including tackling shifting business models and new viewer behavior; how broadcasters are beginning to adopt the Netflix on-demand, streaming model with their own online offerings; challenges in delivering new mobile broadcast platforms; the latest OTT developments as well as up-to-the-minute status reports on ATSC 3.0 and Ultra HD.

As Todd Juenger, an analyst with Bernstein Research pointed out last week in his report, This Report is Not Entitled ‘The Death of the TV Network,’ a decade from now network TV may look a lot more like on-demand services such as Netflix than today’s appointment TV and be far less of a money-making machine.

Once again at the RAI Convention Center, IBC 2015 will address the shifting TV business models, starting with the keynote opening session –“The Future Is Now — Broadcasting In An Age of Challenge.”

The panel, which includes top media executives from Scripps Networks International, BBC World Service and UAE’s OSN, as well as the head of global Android TV partnerships for Google, will discuss their approach to intensifying competition as well as the search engine giant’s expansion into TV and the ramifications of the move.

More of the same, but from a different perspective, is planned for the “Over the Top Comes of Age” keynote on Sept. 12. The discussion, which includes Roger Lynch, CEO of Sling TV, will examine how broadcasters are beginning to adopt the Netflix on-demand, streaming model with their own online offerings.

Part of the success of new OTT services like Netflix is their ability to reach viewers on their smartphones and tablets via the Internet.

IBC 2015’s “The Age of Mobile” keynote on Sept. 13 will break down the challenges media companies face distributing content to mobile devices and how best to protect shows, monetize content and improve the experience of viewers. Mark Dickinson, SVP-GM of the media processing group of British microprocessor maker ARM will present.

A paper session on Sept. 11, “Broadcasting to Mobile Devices: A Glimpse Into the Future,” will look at the technical ins and outs of new mobile broadcast platforms, such as 4G Broadcast (LTE eMBMS) and next-gen 5G, that can deliver content to viewers on the go.

The latest developments in a key OTT enabling technology, adaptive bit rate streaming, will be the subject of a paper session Sept. 11.

The session, “Video Downloading Over the Internet — Dynamic Adaptive Streaming Protocols,” will examine what is new with the MPEG-DASH adaptive bit-rate HTTP-based streaming standard.

Among the five technical papers to be presented during the session will be Enhancing MPEG-DASH Performance via Server and Network Assistance, Quality-Aware HTTP Adaptive Streaming and Improving Content Interoperability with DASH Content Protection.

An IBC Strategic Insights session on Sept. 11 will examine whether OTT is actually expanding the market of TV viewers or simply retraining it to go elsewhere. The panel will comprise top media and tech executives, including the president of STARZ Play Arabia, the CTO of Major League Baseball, the director of Sky Now TV, the digital media and business develop VP at Discovery Networks International and COO of Easel TV.

The session, “Is OTT Simply Broadcast Re-booted,” will discuss whether OTT is the future of broadcasting and what it takes to succeed in this time of transition.

But all of the attention on OTT and mobile doesn’t mean digital terrestrial television transmission won’t remain a vital service offering for broadcasters, particularly as a part of a new hybrid standard that combines the best of broadcast and broadband.

ATSC 3.0, the next-generation digital TV standard currently under development, will take center stage Sept. 14 during “ATSC 3.0 — Where Do We Stand?” Participants in the two-hour session will include Yiyan Wu, principal research scientist at the Communications Research Center in Canada; Richard Chernock, chief science officer at Triveni Digital in the United States; Heung Mook Kim, director, terrestrial broadcasting research section at ETRI in South Korea; Gerald Faria, CTO, TeamCast in France; and David Crawford, professor, University of Essex in the U.K.

The session will include a technical overview of the standard, where development efforts stand and a series of ATSC 3.0 case studies.

Ultra HD, part of the ATSC 3.0 standard, also will be examined at IBC 2015. The “High Efficiency Video Coding Meets UHDTV Broadcasting” session Sept. 11 will examine HEVC trials of 4K and 8K in broadcast and include a paper entitled Ultra HD Bandwidth Planning and Verification for 4K TV.

IBC 2015 also will make available an “Ultra HD Master Class” on Sept. 11 that will focus on what is being done to bring a wider color gamut, HDR, better frame rates, higher resolution and enhanced audio together.

As in years past, a big part of IBC 2015 will be vendor exhibits. This year, some 1,700 companies have signed up to present their technology on the convention floor.

Located in 14 themed halls at the RAI, the exhibition will include a new technology theater that gives exhibitors the chance to present case studies.

Familiar features of IBC will once again contribute to the unique flavor of annual gathering. The IBC Innovation Awards, which recognize excellence in three separate categories —content creation, content management and content delivery —will be presented on Sept. 13 and focus the attention of attendees on the pinnacle of the attainable.

Among the 10 finalists for the Innovation Awards are Disney/ABC Television for its new master control and playout transition from SDI to IP; the Pac-12 Networks for its use of commodity Internet connections to contribute video coverage of 850 annual sporting events to three control rooms where production is done; and the U.K.’s Channel 4 for use of an app as the catalyst for its talent contest The Singer Takes it All.

As has happened at least twice in recent memory — the Sept. 11, 2001, terrorist attack on the World Trade Center and Pentagon, and the beginning of the Great Recession in 2008 — this year’s edition of IBC may be opening during a notable degree of tumult, given the recent stock market swoon and continued changes in how viewers access and watch video content.

But if those past trying times provide a template for this year’s gathering, IBC 2015 will deliver conference sessions, papers, keynotes and exhibits that can give broadcasters new insights on how to weather the storm, and emerge stronger and better positioned for success once the clouds lift.

To stay up to date on all things tech, follow Phil Kurz on TVNewsCheck’s Playout tech blog here. And follow him on Twitter: @TVplayout. To keep up with TVN’s IBC 2015 coverage, go here.

‘The Hill’ Criticizes, But Does Not Recant, Solomon Articles