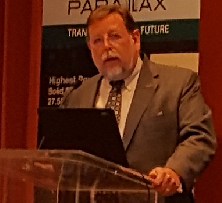 Sinclair’s top tech, Mark Aitken, says the next-gen TV standard will offer stations a plethora of new business opportunities. “There will come a day shortly where the kinds of services broadcasters are capable of offering” will top those consumers will be able to get anywhere else. "The business opportunities of tomorrow are totally open to the imagination.”

The act of transmitting a signal over the air is about to become far more valuable to the television industry than at any point in the past, and TV broadcasters must begin a major rethink of their business models to capitalize on the opportunities made possible by ATSC 3.0, said Mark Aitken, VP of advanced technology at the Sinclair Broadcast Group.

Speaking Sunday evening (April 17) to about 150 dinner guests of transmitter maker Hitachi-Comark at the Wynn Las Vegas, Aitken urged TV engineers in attendance to work with station management to determine what type of business they wish to be in the future.

“This is a really interesting inflection point in this industry,” Aitken said. “The downward trend of folks who have free, over-the-air television will no longer be relegated to folks who decided to cut costs and cut the cable — separating themselves from the wire in the sky [DTH satellite] or that tethered connection they have with fiber and cable.

“There will come a day shortly where the kinds of services broadcasters are capable of offering match a value equation of consumers where they elect to do all of that [receive over-the-air services from TV broadcasters] because we offer more to them.”

Aitken painted two distinctly linked pictures of the future: one of the home viewer and the other of the ATSC 3.0-enabled broadcaster.

“Imagine what happens the day that an individual goes on Amazon, a drone drops the set off on the porch,” Aitken said with a chuckle. “He takes the television set out of the package, he plugs it into the outlet and they have broadcast television.”

What has always separated television broadcasting from the rest of the wireless telecommunications industry — despite many attempts — “is the inability to offer a high quality of service,” he said.

“I can tell you no country in the world has spent more time, energy and resources than Korea to solve the problem of how do you provide on-channel repeaters in an environment where the very system is truly incapable of supporting a single frequency network,” said Aitken, referring to the difficulties of deploying single frequency networks with a single carrier transmission system like 8VSB.

“Certainly, this broadcaster [referring to himself] is looking forward to the opportunity and time when what we are doing is not about coverage, it’s about service — service availability, the ability to target the service that not only supports the kind of service we want to flow across the network, but the opportunity to gain from other industries that would like to flow their bits across our platform.”

Today, if someone were to ask TV broadcasters what business they were in, most would say television, he said.

“I can tell you as a broadcaster that certainly television is our business today because there has been a sort of an inextricable linkage between the service that we offer and the platform that it is carried upon,” he said.

However, with ATSC 3.0 broadcasters have an opportunity to “fully decouple” the service from the platform, he said.

“The business opportunities of tomorrow are totally open to the imagination of what kind of bits do we want to flow across that IP link. Where are those bits going to reside, where are they going to come from and how are we going to profit from them?” he asked.

Some of those opportunities include: becoming an uplink for a mobile portal of MVPD service; providing a pay music service that competes with satellite radio; and offering digital bit transport for businesses unrelated to television, Aitken said. And those are in addition to carrying broadcasters’ main TV channels.

While Aitken noted that most broadcasters are unlikely to deploy SFNs once the ATSC 3.0 starting gun is fired, as they gradually add repeater sites in the OFDM environment made possible by the next-generation TV standard they will approach a point where they can be counted on to deliver a high quality of service.

Aitken noted that several companies, including Dielectric, Acrodyne, ONE Media and Sinclair have been working over the past six months on building a software emulation system that makes it possible to give broadcasters “a first look at what an SFN can do, the kinds of services that are available.”

The software is being created based on the experience Sinclair is having in the Washington-Baltimore market where it has deployed a two-transmitter ATSC 3.0 SFN and will soon add a third.

“We can match the real-world against the theoretical and better match the modeling that goes on to ensure there is not a mismatch in the way people deploy [SFN] systems,” he said. “It will be an extremely important part of the future.”

Correction. You posted it on Twitter today. No Likes. No Retweet. If a tree falls in a forest and no one is around, does it make a sound?

@senfranken should read the entire petition, as he will see that there is a parallel transmission plan for 1.0 broadcasters and 1.0 sets.

Wow….can we put the lead back into Gasoline as well that caused all older cars to be obsolete?

Analog Cell Phones no longer work due to move to Digital #BringBackAnalogCellPhones !

Nextel Phones no longer work due to Frequency Changes #ReleaseTheNextelFrequencies !

Clear Wireless System no longer works due to Technology Changes by Sprint #BringBackClear !

Motorola AM Stereo no longer works due to change in Technology #BringBackMotorolaAM Stereo !

None of my HDTV Equipment work in EU due to different Current/Voltage #60cycle110VWorldwide !

My Old NTSC TV will not work any longer! #BringBackNTSC !

Just imagine if we lived in a World where nothing changed. @PhillyPhlash would still be writing out his thoughts longhand that no one would ever read! Now he types out his thoughts on his Computer to Twitter for no one to ever read! Technology Changes! Same results.