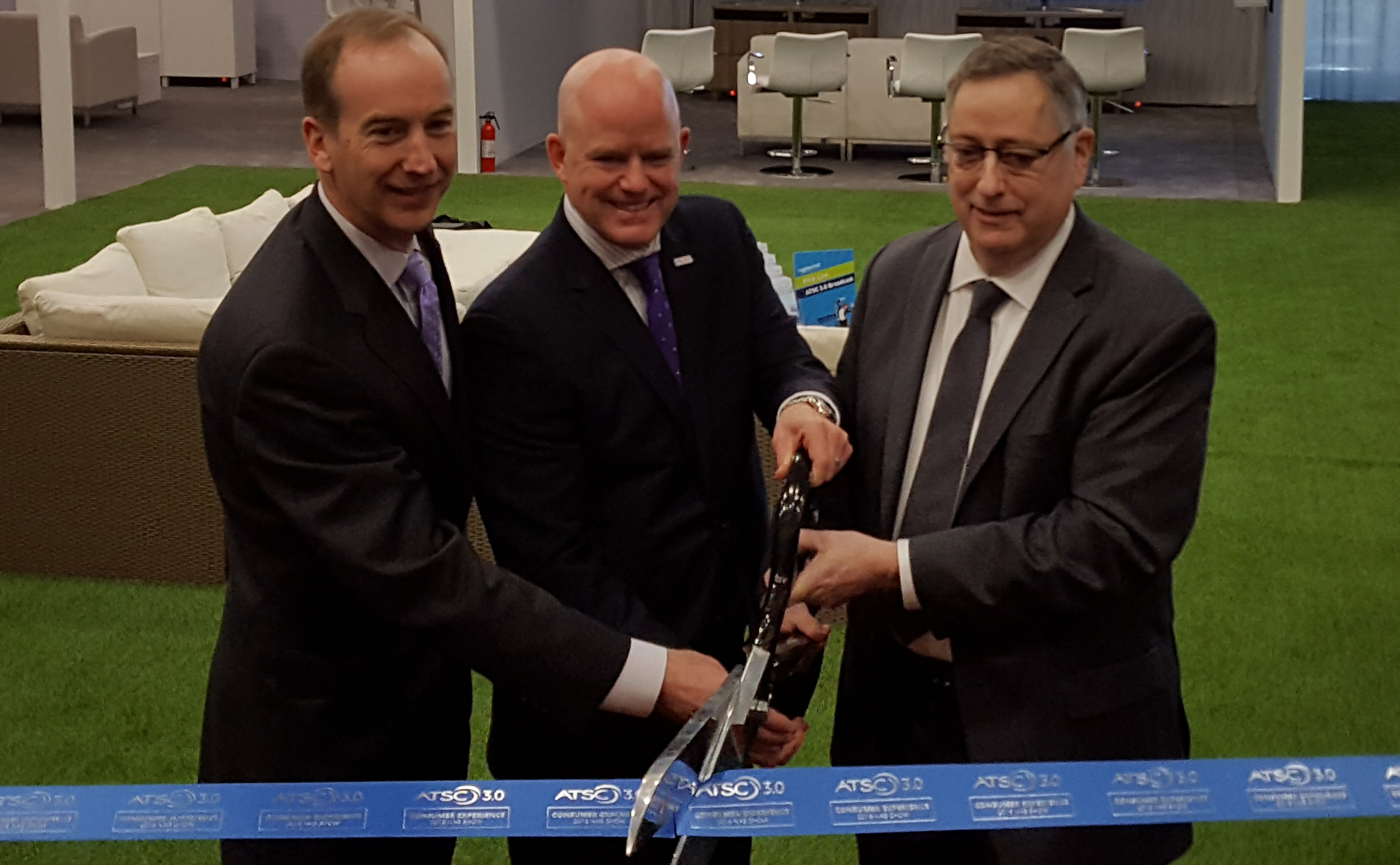 The ATSC 3.0 Consumer Experience at the 2016 NAB Show offered a look into a future that includes reception of ATSC 3.0 TV signals in next-gen consumer televisions and powered indoor antennas that receive 3.0 signals and retransmit them via Wi-Fi to smart TVs in the home —both next-gen sets and existing HDTVs. Opening the exhibit were (l-r): Mark Richer, ATSC president; Sam Matheny, NAB CTO; and Brian Markwalter, CTA SVP of research and standards.

John Taylor, LG Electronics VP of public affairs, held in the palm of his hand a clear acrylic block with what is said to be the world’s first ATSC 3.0 demodulator chip embedded deep within.

In a sense, Taylor, who was discussing the company’s exhibit in the ATSC 3.0 Consumer Experience (outside of the entrance of the South Upper Hall of the Las Vegas Convention Center), held the future of the TV industry in the palm of his hand.

The chip, a black piece of silicon no bigger than a third of the size of a postage stamp, will enable reception of 3.0 signals in next-gen consumer televisions and powered indoor antennas that receive ATSC 3.0 signals and retransmit them via Wi-Fi to smart TVs in the home —both next-gen sets and existing HDTVs.

“We are particularly excited about the new LG wireless antenna, which is basically an electronically steerable antenna. It has the same chip I was talking about that will receive over the air ATSC 3.0 and redistribute it in your home via Wi-Fi,” he said.

Taylor made his remarks Monday morning (April 18) shortly after the official ribbon cutting opening the ATSC 3.0 Consumer Experience at the 2016 NAB Show to the press.

The chip is the first fabrication to be used in ATSC 3.0 televisions and indoor gateway antennas, and will be exclusively available to LG, at least in the earliest stages of the next-gen TV rollout, Tayor said. “We have been working on the chip for a long time, and you are going to see at least one other generation this year,” he said.

Inside the booth, LG also showed a 4K Ultra HD television enabled with 3.0 reception thanks to the chip displaying content originating on the show floor.

Taylor added that the new chip or its successor will likely play an important part in the rollout of OTA 4K terrestrial broadcasting by February 2017 in South Korea.

The nation is expected to settle on 3.0 as its over-the-air standard to make Ultra HD reception of the 2018 Winter Olympic Games a reality, he added.

Nearby, Dolby was showing off the two most important aspects of next-gen TV audio: personalization and immersive sound.

“This is the world’s first ATSC 3.0 signal hitting a consumer device and being received and decoded by the consumer device,” said Sripal Mehta, principal architect, broadcast at Dolby.

For the demo, the setup was receiving HEVC video, AC-4 audio via MPEG-DASH, he said.

Sitting dead center on the couch in front of the Dolby audio demo and 3.0 flat screen, one could take in the immersive sound experience consumers one day will have in their homes.

Dolby also showed off various audio personalization features, including support for multiple languages in 5.1 with a simultaneous audio description track of the on-screen presentation for the sight impaired and the ability to reduce the level of sound effects and music tracks to make dialog more intelligible.

The company even added a personalized audio track of play-by-play commentary from a comedian who knew next to nothing about the rugby match being displayed on screen. The point, Mehta said, was to underscore how a creative broadcaster might provide custom audio via ATSC 3.0 for a segment of its audience that otherwise would be unlikely to tune in to a given program.

At Samsung’s Consumer Experience booth, the company was focused on how the next-gen TV standard can be used to push new program services, such as movies and commercials to the next-gen receiver where they are cached.

Doing so enables delivery of new VOD services made possible by ATSC 3.0 as well as supports targeting of commercials to individual households.

The idea of caching the content on the next-gen TV rather than playing it back from a broadcast head-end in real time is to provide an added level of confidence that the programs and commercials are going to playback in the event of a service outage.

AWARN, the next generation of broadcast emergency alerts, was also featured in the booth as well as an immersive audio demo by Fraunhofer of MPEG-H and next-gen TV outdoor receive antennas.

The ATSC 3.0 Consumer Experience even gave a tip of the hat to a famous practical joke in the early 1950s when an engineer with a sense of humor painted a banana blue during an early test of color TV by RCA Labs and NBC.

Displayed prominently on the ATSC 3.0 receiver at the front of the Consumer Experience was a rotating bowl of fruit — of course, with a blue banana.

And the Military Industrial Complex can even use it to keep closer track on PhillyPhlash!