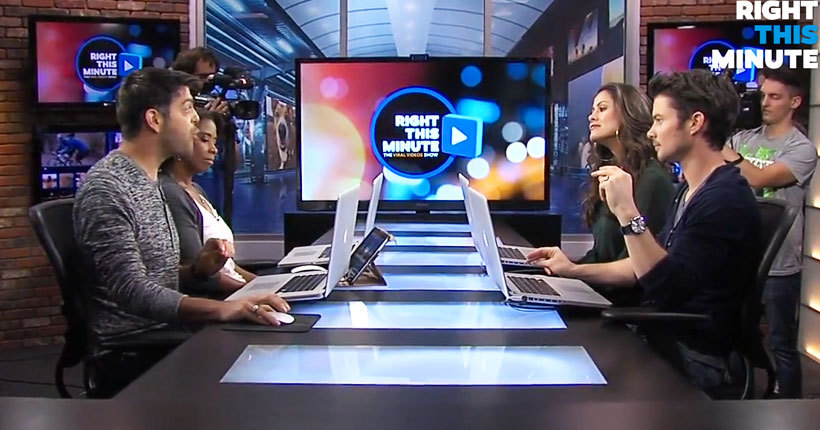 The station group’s executives spell out how they are bucking the syndication system with their five-year-old strategy to develop home-grown programming like The List and Right This Minute. “Many in the industry thought we were nuts … and five years later, all of our peers are starting their own programming divisions based on the success that we’re having,” said Brian Lawlor, Scripps SVP, broadcast.

Lawlor made his remarks Tuesday at an NAB Show session with investors who were eager to learn about Scripps and the direction the company is headed in original content production for both broadcast and digital. Lawlor was on a panel of Scripps executives that included Rich Boehne, chairman, president and CEO, and Adam Symson, chief digital officer.

Lawlor summarized the evolution of Scripps’ original program development since its start five years ago, and said that now, what Scripps did “turned the industry upside down.”

“We’re the knuckleheads that a couple of years ago kind of pivoted from the industry and decided that we were going to cancel our contract with Wheel of Fortune and Jeopardy and develop our own programming,” Lawlor said, recalling a story that sent shockwaves through the industry.

“Many in the industry thought we were nuts at that point, and five years later, all of our peers are starting their own programming divisions based on the success that we’re having,” he said.

He then reported on the status of two of Scripps’ original shows — Right This Minute, a co-production of Scripps, Cox and Raycom, and The List. Right This Minute is now cleared in 90% of the U.S., he said, on stations owned by the three production partners, plus the ABC O&Os, which recently cleared the show.

Disney-owned Buena Vista Television is handling national ad sales. “There’s a great model for local broadcasters — sharing some risk together, taking creative risk on the content side — and it’s created a new long-tail revenue stream for us,” Lawlor said.

Regarding The List, Lawlor said the show is “very profitable,” and Scripps expects to announce new clearances for the show on non-Scripps stations in a few weeks.

“Now we have it in 15 markets and we’ll be able to take it to all of our other markets, and every time we do that, we take another weekly syndicated rate that we’re paying for another show and that goes away,” he said. “It’s just a very profitable program for us, and now for us to be taking it into syndication and having other major broadcasters in America clearing The List, I think we’ve proven to the industry that you don’t have to rely on the syndicators.”

The List “is very profitable,” he said, “This show’s working better than a lot of the junk that’s been coming out in syndication for the last six months or a year.

“I think what you’re now seeing is broadcasters working together, realizing that we can create content as good as anything we’re finding in the syndicated market. And I think we turned that industry completely upside-down,” Lawlor told the investor group.

At another point in the session, Lawlor provided a glimpse of the sometimes tense relationship between affiliates and their networks. He was answering a question that was aimed at understanding why affiliates don’t apply pressure to their networks when the networks put on shows that fail.

Lawlor said affiliates do provide that kind of pressure, and he gave two examples. “So if you read the [trade press] today and you read all the nice, warm things that were said about how well the networks and affiliates loved each other in their network meetings [on Monday], that’s all choreographed before we walk out the door,” he said.

“I’m on the board at ABC and we turned up the pressure and, as a result of that, Paul Lee is no longer the head of ABC primetime,” Lawlor said. “We’re not willing to settle for those kinds of ratings performances.”

Lawlor was referring to ABC’s decision in February to replace Lee, who had been president of ABC Entertainment since 2009, with Channing Dungey, who was promoted from EVP, drama. ABC affiliates have been dissatisfied with ABC’s primetime performance this season, particularly in the third hour that leads into affiliates’ late newscasts.

“You go back to the days [of] that brilliant idea of putting Jay Leno from 10 to 11 o’clock on NBC,” Lawlor said. “If you all remember that event, it was the affiliates that ended that. The affiliates sat in [then-NBC President] Jeff Zucker’s office and said: ‘If you don’t take this down, there’s going to be a revolt on Monday,’ and when the news came out that Leno was canceled at 10 o’clock, [Zucker] put the blame on the affiliates.”

Makes sense – the reverse of studios owning TV stations. A few singles and strike outs so far; who will be the first group to have a home run?

Just to provide some context, did anyone from TV NewsCheck do any actual checking? For example, how are these Scripps concept shows doing in real circumstances in markets like Denver? Check the latest numbers…
more often asterisks or close to ’em. Cheap shows, fake enthusiasm and pseudo hipness don’t add up to a winning combination. Scripps misread at least this market in formatting “The Now.” More like the “Not Now” here.