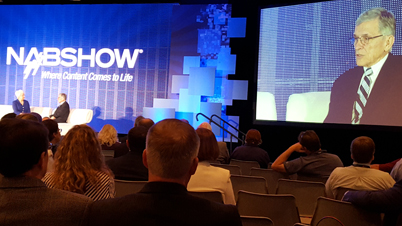 The FCC Chairman tells an NAB Show audience: “Hooray for the creative thinking of the broadcast community that brought ATSC 3.0 from an idea into reality. We need to move with dispatch to get that in the public debate.” He says the proposal will be put out for comment by the end of the month. He also says the FCC will announce how much spectrum it wants by the end of the month and reassures broadcasters that he will lead the push to get more money for the post-auction repack if that proves necessary.

FCC Chairman Tom Wheeler today gave broadcasters an endorsement of their ATSC 3.0 broadcast system, saying he would ask for public comment on the industry petition to make it a voluntary broadcast standard by the end of this month.

“Hooray for the new technologies,” he said at an NAB general session during which he was interviewed by former Schurz Communications’ TV station chief Marci Burdick.

“Hooray for the creative thinking of the broadcast community that brought ATSC 3.0 from an idea into reality. Now we’ll see where we go from here, how we make it work.

“We need to move with dispatch to get that in the public debate and start the process on that.”

Addressing the incentive auction, Wheeler said that the FCC will reveal how much TV spectrum it will seek in the reverse auction before the end of this month, and by June it should know how much money it will need from the forward auction to acquire the broadcast spectrum.

Wheeler wasn’t giving anything away prior to the official announcements.

Expecting that he would be asked (as he was) about how many broadcasters have indicated that they would participate in the auction, he settled on one word — extravaganza. “You can read into that whatever you want, but people have shown up…. It’s bigger than a breadbox.”

Turning to the repacking of the TV band that will follow the auction, Wheeler said that it is going to be a “huge challenge” to move stations to their new channels “with as much ease and with as much understanding by consumers as possible.”

To that end, he said, the FCC is assembling a “team” to help come up with a comprehensive repacking plan.

Broadcasters have been concerned about the government’s current plan that  gives them just 39 months to move to their new channels and just $1.75 billion to cover their costs.

Asked about those concerns, Wheeler said that he might be more help on the money. “If the $1.75 billion isn’t enough, I will be happy to lead the parade to say that has to be changed,” he said.

He said he wanted to wait until after the auction before making any promises on the 39-month deadline.

“We need to look at specific circumstances and say, OK, how do we deal with those. Do you have a waiver? Do you have a blanket rule? I am not going to prejudge on that.”

Wheeler said that the FCC “is managing toward” a decision on its retransmission consent rulemaking by the end of the year.

In that proceeding, the FCC is considering complaints from satellite and cable operators that broadcasters have too much leverage in retrains negotiations and not acting in good faith as required by law.

Wheeler said he is not going to prejudge, but he sounded sympathetic to the underlying claim of the operators that broadcasters’ failure to negotiate in good faith is resulting in too many blackouts in which cable and satellite subscribers can’t get broadcast signals.

“[G]ood faith was put in for the purpose of saying: OK, people of good faith come together and avoid consumer harm,” he said. “There seems to be an increase in disputes and resulting consumer harm.”