Back to TVNewsCheck Home Print this page
SPONSORED BY DEJERO

The World Racing Group wanted to stream more events live, but with fiber connectivity rare and cellular connections not always reliable at the remote venues where many races take place, producers feared reliability would be an issue. They eliminated it with a Dejero solution that enabled them to double the number of races streamed live.
By Dejero | March 17, 2019 | 5:40 p.m. ET.

Dirt track racing fans wanted to be able to watch more events, even when they couldn’t get to every competition. To meet this demand, the World Racing Group, the premiere sanctioning body for dirt track racing in North America, decided it needed to live stream more events.

The problem lay in reliability. Fiber connectivity is rare at the remote locations where many “World of Outlaws” races take place, and producers worried about depending soley on cellular, particularly at peak times.

The World of Outlaws Craftsman Sprint Car Series presents a 93 race schedule, coast to coast, taking the dirt car specialist over 45,000 miles across the U.S. each season. Since it’s difficult for fans to follow the season by just reading about it, WRG was determined to keep fans engaged night in and night out, all year long, by giving them viewing access to every race.

In prior seasons, WRG production teams had relied heavily on cellular connectivity, but even in areas with good coverage, cellular networks could become congested at sold out venues, especially during key race moments. 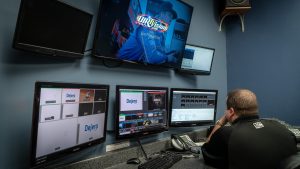 “Thanks to Dejero CellSat, we can now live stream an entire race schedule ‑ that has never

before been possible,” explained Brian Dunlap, director of broadcast services at WRG. “Up to this point, we were limited by technology, only streaming a maximum of 50 events a year, a number we had been slowly growing since we started streaming content in 2004. We’ve nearly doubled that number, now able to stream each of the 93 races in our schedule reliably—even when cellular networks are congested.”

WRG built a 26-foot mobile production unit to house equipment that travels up to 45,000 miles per season. While on-site for a race, CellSat connects to a full production switcher capable of a multi-camera shoot, then back to the main production studio based in North Carolina. A maximum of two people are required on-site, with another working back at base. 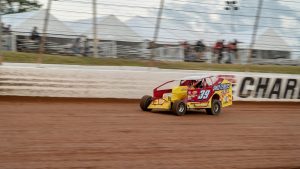 The network blending capability of Dejero CellSat has allowed WRG to live stream 100% of its premier racing schedule—no matter the venue. Reliably providing high-quality video, the CellSat connectivity service is reducing resources needed, cost, and set-up times for WRG. Since adding CellSat to its workflow in April 2018, WRG’s social media profile has sharply risen, with exponential growth in live fan engagement during races.

“The capabilities of CellSat have been a critical part of our success this year, because they allow us to work independent of the cellular bandwidth available, added Dunlap. “Due to large crowds, the bandwidth often dips dramatically at key times, especially at the start of a race. Seamlessly blending in more satellite connectivity as needed means we don’t have to skip venues during the racing season and can bring fans the very latest racing news, live, from every single race. The reliability and the ability to do more, to work in more places thanks to CellSat has really changed the game for WRG.”

Being able to perform all broadcast and streaming tasks from within a mobile production unit has taken away the burden of setting up all the equipment out of flight packs at each event for WRG, saving considerable time and resources.

No longer at the mercy of the bandwidth available from the local cell towers, WRG is using Dejero CellSat to take its remote production to the next level, confidently providing broadcast quality, live video to its fans.

The CellSat connectivity service was created in partnership with Intelsat, a world leader in

providing integrated satellite communications. Since the service is provided through a single point of contact, Dejero, procurement, management, and billing are greatly simplified. The solution includes hardware, software, and connectivity services to the CellSat network—all managed in the cloud, and backed with industry-leading technical support.

Cellular network connectivity is fast to deploy and cost-effective, but reliant on coverage provided by mobile network providers and subject to congestion from competing production crews and smartphone users vying for the same bandwidth or to weaker coverage in more isolated locations that only allow lower bitrate streams.

Satellite, which is very consistent and often relied upon for critical live coverage of major events, comes with increased costs, complexity, and administration time. Satellite time often needs to be booked in advance and in defined time slots. You also need to consider the location of the satellite in relation to the dish for line of sight—anywhere with high surroundings (buildings, etc) will be trickier. However, in these areas you’re more likely to have better cell coverage so the need for satellite drops.

CellSat combines the best attributes of these technologies and provides broadcasters better choices. The multi award-winning Dejero CellSat solution provides enhanced reliability in situations where cellular networks are congested or cellular coverage is limited – ultimately presenting the necessary bandwidth, on demand, to deliver exceptional picture quality and greater reliability while on location.

CellSat users don’t have to book satellite time – it is simply available to boost bandwidth when and as they need, at the push of a button. The system also intelligently manages and blends the satellite connection with the available cellular connections. This enables Dejero to provide the aggregated bandwidth that delivers additional reliability when broadcasting live from the field.

A midstream activation feature simplifies switching between cellular-only and CellSat transmission paths, without having to stop and restart the transmission. CellSat midstream activation puts greater cost control in the hands of broadcasters when contributing high- quality video content from the field. In addition to video transport up to 20 Mb/s with Dejero HEVC-capable encoders, the CellSat blended connectivity service also enables data transport for applications such as email and Internet access.

Visitors to NAB, April 8 – 11 in Las Vegas can visit the Dejero booth (C2025) for a demo of the award winning CellSat solution or visit www.dejero.com/cellsat for more information.