News Channel Nebraska, a network of independent TV and radio stations serving Nebraska and Sioux City, Iowa, had been expanding rapidly since its launch in 2015. Its founder, Mike Flood, knew his cobbled-together workflow could no longer handle the growing lineup of local news, live sports and live events the group was producing.

After extensive research, his company, Flood Communications LLC, selected Octopus for the core of its newsroom operations.

“News Channel Nebraska was doing everything the hardest way possible,” says Flood, a business man and attorney who had served as Speaker of the Nebraska state legislature. “We started as a radio company which then embraced video and now have our own in-state network serving over 500,000 Nebraska households.”

A Deep Dive into NRCS Options

The group, which had grown to include six low power TV stations and had added a Telemundo network to its cluster, transmits programming across eastern Nebraska and parts of Siouxland. 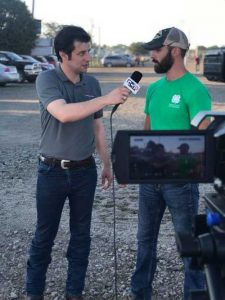 “We needed a reliable, flexible and operator-friendly newsroom computer system to coordinate the news production activity across our various sites,” Flood said. “The stations had outgrown the NRCS we used for the first two years to the point where it was really holding us back.

“We spent a tremendous amount of time researching the best NRCS options that would deliver solutions for TV and on-demand digital as well as radio,” he says. “We didn’t want to buy expensive servers that would eventually have to be replaced. Probably the biggest reason we chose Octopus was that it allowed PC and Mac workstations from multiple cities to interface and create content for NCN.”

“The Octopus solution met our requirements much more closely,” Flood says. “We bought 15 licenses and several of the options. The Octopus team handled everything efficiently and on time including two weeks of training.”

“Our studio-based news teams and mobile reporters find Octopus a pleasure to work with, putting all the tools they need for each project within easy reach and allowing very fast searching of archived clips,” Flood says. “Operating Octopus is a process. There are so many facets to it, we have really only scratched the surface. Being a MOS system has been nice because it interfaces well with the other available systems in the market.

“I like the ability for us to run an entire network serving the whole state of Nebraska and getting content in real time from multiple users,” Flood continues. “I also like the fact that we can have a staff of 130 people delivering content with up to 15 active at any one time and anywhere. If 15 became insufficient we can obviously expand to accommodate more simultaneous users.

“Octopus allows our content to be fluid and come from many different sources, instead of people being confined to designated workstations and tied to a server room at one location.”

Cross-platform compatibility was also a major advantage. “Octopus gives us the ability to integrate freely with systems from other manufacturers and software developers,” Flood says. “In terms of features, it provides a lot of value for its price.”

Learn more about how Octopus is streamlining news production at NAB 2019, Make an appointment for a demo at [email protected] or call Gene Sudduth, National Sales Director, at 844-OCTNEWS. Or visit Octopus at SL7627.