Bull star Michael Weatherly remains loved by viewers despite Eliza Dushku’s claim of on-set sexual harassment against him, CBS said in defending its decision to keep the show and the actor on the air.

CBS is defending its handling of a sexual harassment by Michael Weatherly, star of its drama series Bull. CBS Entertainment President Kelly Kahl said Wednesday that Weatherly “owned” his mistake and was apologetic and remorseful. Last year, CBS reached a $9.5 million confidential settlement with actress Eliza Dushku after she alleged on-set sexual comments from Weatherly made her uncomfortable.

The returning dramas are Bull, Hawaii Five-0, Madam Secretary, MacGyver, SEAL Team and SWAT, while the news programs are 48 Hours and 60 Minutes.

The actress wrote an op-ed in The Boston Globe about her $9.5 million settlement after on-set sexual comments from Michael Weatherly, star of the CBS show Bull, made her uncomfortable when she was beginning a run as a recurring character.

CBS reached a $9.5 million confidential settlement last year with actress Eliza Dushku after on-set sexual comments from Michael Weatherly, star of the network’s show Bull, made her uncomfortable when she was beginning a run as a recurring character. Dushku was written off the show after complaining about Weatherly’s comments on her appearance and jokes involving sex and rape made in front of cast and crew in March of 2017.

Racy Campaign Got ‘Bull’ Off To Strong Start 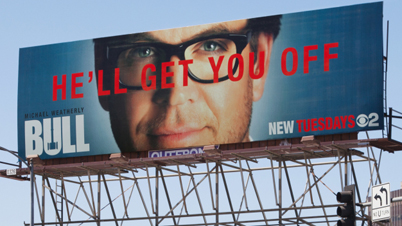 The TV season’s most provocative campaign so far, which successfully launched the most-watched freshman series in terms of total viewers, was much racier than one would have expected from a CBS show. “When your marketing becomes content, that is the jackpot,” said George Schweitzer, president of CBS Marketing Group. “The fact that it went viral, that it was on our competitors’ latenight shows, that it took on a life of it’s own — that’s pure!”

How ‘Bull’ Got CBS Viewers Off

Bull, the freshman CBS drama on which Michael Weatherly stars, is one of the early success stories of the new fall season. It premiered Sept. 20 to 15.6 million total viewers in Nielsen live-plus-same day numbers — the most for any new scripted series premiere so far this season — and saw little ratings erosion in its second week. Its fast start is being propelled in part by an eye-catching marketing campaign, the highlight of which are billboards featuring Weatherly.

Two of this season’s high-profile new dramas — NBC’s This Is Us and CBS’s Bull — pulled in notable gains over three days of delayed viewing, according to Nielsen’s just released live-plus-3 ratings for the Tuesday premieres.

The DVR playback numbers are in for fall TV premiere week’s Monday and Tuesday offerings, and CBS’s The Big Bang Theory as usual got much bigger, while NBC’s This Is Us solidified its position as a breakout hit.