David Letterman: I Stayed On Network TV For Too Long

NEW YORK (AP) — David Letterman says he stuck around on network television about 10 years too long. He made that admission during an appearance Thursday on Ellen DeGeneres’ talk show. Letterman quit in 2015 after 33 years as a late-night host on CBS and NBC, and is beginning his second season on his more […] 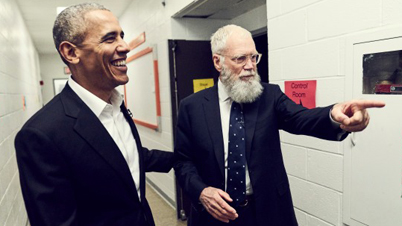 David Letterman has amassed an all-star roster of guests for his Netflix talk show series, titled My Next Guest Needs No Introduction with David Letterman. The 60-minute show will stream monthly with the first episode launching on Friday, Jan. 12, and the additional five episodes streaming, one a month, after that. Letterman will kick off the series with a chat with Barack Obama. 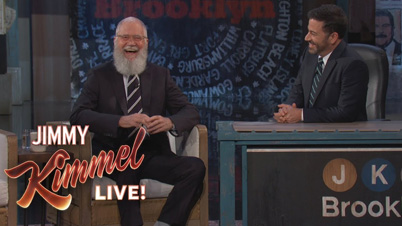 The 70-year-old David Letterman spent 33 years on late-night TV, hosting long-running shows on NBC and then on CBS. His final broadcast on May 20, 2015, was episode No. 6,028 that Letterman hosted. It shattered the record of his mentor, Johnny Carson.

The Misunderstood History Of Trump On Letterman

Letterman Getting Netflix Show Next Year

David Letterman is returning to a regular TV gig, setting a deal with Netflix for a show that will combine long-form interviews with reports from the field. Netflix has ordered six episodes of the hourlong series, to be produced by New York-based RadicalMedia and Letterman’s Worldwide Pants banner. The untitled show is targeted to debut next year.

Like Mark Twain, David Letterman distinguished himself as a cockeyed, deadpan observer of American behavior and, later in life, for his prodigious and distinctive facial hair. Now the two satirists share a further connection: Today, Letterman was named the next recipient of the Mark Twain Prize for American Humor, the award granted annually by the John F. Kennedy Center for the Performing Arts.

NEW YORK (AP) — David Letterman’s mother Dorothy Mengering, a Midwestern homemaker who became an unlikely celebrity in her 70s as she baked mystery pies and covered the Olympics for her son’s latenight show, has died. She was 95. Letterman’s publicist Tom Keaney confirmed Mengering’s death Tuesday for The Associated Press. Letterman had been on […]

On TV, He Stops Fans With His Tongue

Letterman (And His Beard) Shop At Target

The former Late Show host on the liberation of retirement: shaving optional, shopping solo and coming to terms with a certain latenight feud.

Letterman: ‘I Don’t Know Why They Didn’t Give My Show To A Woman’

Letterman, Even Retired, Keeps On Interviewing

Some things are more important than retirement. David Letterman was called back into action this weekend with a brand-new Top Ten List inspired by the recent presidential candidacy of Donald Trump. Although he’s been content since retiring as host of “Late Show” in May, Letterman called missing out on lampooning Trump’s White House bid “the […] 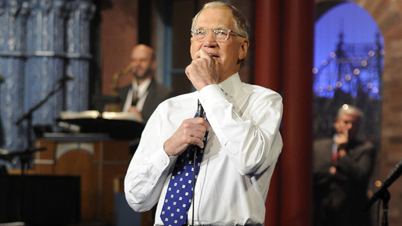 Letterman presided over 6,028 broadcasts on CBS and NBC, the transplanted Hoosier making Top 10 lists and ironic humor staples of television comedy and an influence to a generation of performers. True to his self-deprecating style, he said Stephen Hawking estimated that tenure delivered “about eight minutes of laughter.”

David Letterman Counts Down To His Exit 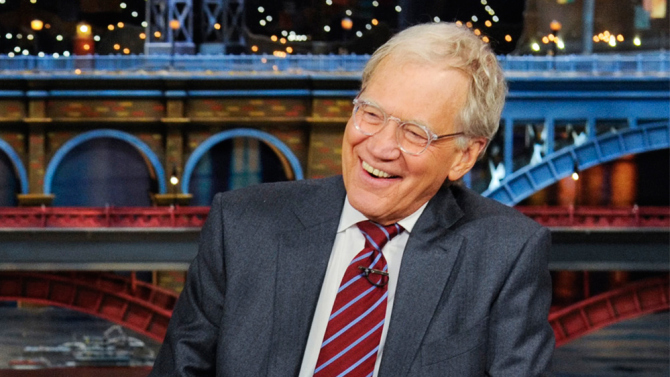 David Letterman will close out his influential career on latenight television tonight with his 6,028th episode. He’s kept details of the final show a secret.

The Big Lesson We Learned From Letterman

David Letterman taught us to ward off celebrity stupidity. But stupidity won. He has done all he can in the face of so much stupidity, often by pretending to the stupidest one of all. There came a point — and Letterman saw it, you have to believe that he saw it — where his style, his aw-shucks approach was no longer effective against so much noise and trash.

By now he’s done it all. David Letterman has carved a place in cultural history with his pioneering brand of postmodern silliness that collared Late Night fans on his arrival in 1982 and subsequently was absorbed into the Age of Irony he played a major role in charting. 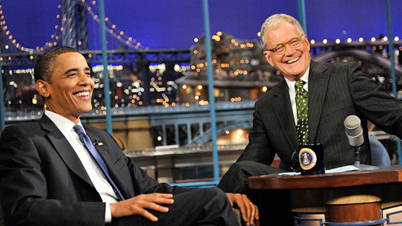 David Letterman, who steps down next week after more than 30 years in latenight TV, evolved from zany oddball to great American broadcaster, one without peer in his ability to segue from serious stuff to slapstick.

The most prominent evidence of David Letterman’s impact is the reliance of today’s latenight hosts on a playbook that he developed.

No New Kimmel Opposite Letterman Finale

“I have too much respect for Dave to do anything that would distract viewers from watching his final show,” ABC latenight host Jimmy Kimmel said yesterday. Jimmy Fallon and Conan O’Brien aren’t following suit. NBC’s The Tonight Show and TBS’s Conan are planning original installments for May 20.

NEW YORK (AP) — Hidden in the attention being paid to David Letterman leading to his May 20 retirement is the knowledge that it will also mean the end of a regular television role for America’s bandleader, Paul Shaffer. The gravel-voiced sidekick, who’s 65, isn’t ready to leave show business even with the gig of […]

Letterman Reflects On 33 Years In Latenight

On May 20, David Letterman will preside over his last episode of Late Show, the CBS franchise he established and has hosted since 1993. As he prepares to leave the stage, he shares his takes on the industry, himself and the future.

Appearing on “The Late Show” Wednesday for the first time since he went to Washington in 2009, Franken denounced Indiana’s newly passed religious objections law that critics say sanctions discrimination against lesbians and gays. He suggested that his longtime friend could fill the seat being vacated by retiring Republican Sen. Dan Coats. The audience applauded […]

Man Accused In Letterman Kidnap Plot To Be Freed

GREAT FALLS, Mont. (AP) — A man once accused of plotting to kidnap David Letterman’s young son and his son’s nanny from the comedian’s Montana ranch for a $5 million ransom is set to be released from prison Thursday. Montana Parole Board analyst Julie Thomas tells The Great Falls Tribune that Kelly Frank’s parole request […]

NEW YORK (AP) — David Letterman, maybe your next career should be as an author. The CBS ‘‘Late Show’’ host, scheduled to step down in 2015, is a finalist for this year’s Thurber Prize for American Humor. Letterman and illustrator Bruce McCall have been nominated for the satirical picture book ‘‘This Land Was Made for […]

Letterman Gets Visit From Successor Colbert 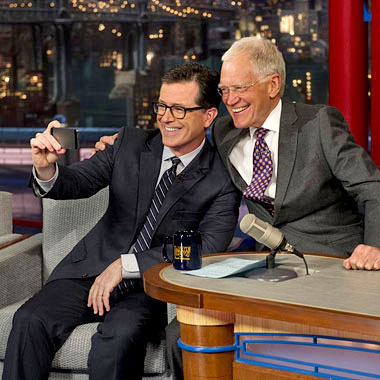 Stephen Colbert, the Comedy Central host, visited the Late Show for the first time since it was announced earlier this month that he will replace David  Letterman sometime next year. He was greeted warmly, with Letterman introducing him as “very talented” and “always entertaining,” and the two men posed for the obligatory selfie.

That was quick. News of David Letterman’s announcement of his 2015 retirement broke only late Thursday afternoon, but Fox and the writers and animators behind The Simpsons already have an animated tribute to him, complete with a cameo performance by Letterman himself.

CBS latenight star David Letterman is retiring in 2015. Latenight television is a far different world than when Letterman and Leno began their competition. There are more entertainment shows to choose from, with personalities like O’Brien, Arsenio Hall, Jon Stewart, Stephen Colbert and Chelsea Handler working every night. CBS will first have to decide whether to continue with an entertainment program in that time slot. It’s not the money-maker it once was, but chances are the network will continue in that direction.

David Letterman poked fun at Leno and NBC. Leno poked fun at Letterman and NBC. Jimmy Kimmel mocked himself. Fallon played it cool. And Conan O’Brien took the high road after NBC said Wednesday that Fallon will inherit Tonight from Leno in 2014 — as O’Brien did in 2009, before Leno took it back.