Back to TVNewsCheck Home
ELECTION 2016

Donald Trump, who has antagonized the news media and restricted access throughout his campaign, does not control the credentialing for this week’s Republican convention. That job is left to the Congressional Press Galleries. As a result, some news organizations will enjoy official entry to a Trump-led event for the first time in months.

GOP VP Choice May Be Conflict For WTTV’s Pence

Is A Trump News Channel In The Works?

The breakout media star of 2016 is, inarguably, Donald Trump, who has demonstrated an aptitude for manipulating the news cycle, gaining billions of dollars worth of free airtime and dominating coverage on every screen. Now, several people around him are looking for a way to leverage his supporters into a new media platform and cable channel.

The Washington Post was the latest target of Donald Trump’s ire Monday afternoon, but the publication is just one of more than a dozen news organizations the candidate has blocked from doing its job.

An embattled Donald Trump urgently rallied his most visible supporters to defend his attacks on a federal judge’s Mexican ancestry during a conference call on Monday in which he ordered them to question the judge’s credibility and impugn reporters as racists.

On Tuesday during a nationally televised news conference, the Republican presidential nominee experienced a towering meltdown after reporters asked him to account for the millions he claimed to have raised for veterans several months ago. The performance was vintage Trump and echoed a basic set of behaviors he has exhibited all campaign long. As the emotional equivalent of a toddler, Trump can’t articulate the rage he feels, and the interrogations at news conferences seem to make him only angrier. The press is not Trump’s keeper, but we can help him better handle confrontation. Here’s how.

Trump Backs Out Of Bernie Debate

News organizations wonder how to avoid a lopsided view of the election race as Donald Trump seems to relish airtime, while Hillary Clinton does not.

ABC, CBS and Fox News have expressed interest in hosting a debate between presidential candidates Donald Trump and Bernie Sanders.

That possibility surfaced Wednesday, even if in a jocular tone, in an indirect exchange between the Republican billionaire real estate mogul and the senator who Hillary Clinton hasn’t been able to bump from the Democratic presidential sweepstakes.

Despite landslide victories on Tuesday, Donald Trump still needs to win Indiana — and he’s starting to act like it. The frugal Manhattan mogul has begun opening his wallet for the air war, spending more than $900,000 on TV and radio ads.

Donald Trump’s journey to becoming the Republican frontrunner for the presidential nomination began in earnest on Jan. 8, 2004 — the night The Apprentice premiered on NBC.

Megyn Kelly will interview Donald Trump in her Fox special Megyn Kelly Presents that’s slotted to air on May 17. This will be Kelly’s first one-on-one interview with Trump since their fiery encounter at the August 2015 GOP Presidential primary debate.

Donald Trump opened his wallet wide for his presidential campaign in March, loaning it $11.5 million, nearly twice as much as he’s shelled out in any previous month, according to a report filed Wednesday night with the Federal Election Commission. Trump’s campaign also increased its spending, shelling out nearly $13.8 million, marking the first month in which he outspent his main rival for the GOP nomination, Texas Sen. Ted Cruz, who spent $11.8 million last month.

Donald Trump has emerged as the candidate to beat while spending far less than his rivals — a potentially troubling development for local TV stations, which rely heavily on revenue from political ads.

Almost $70 million of the record $132 million spent so far on negative advertising has been directed at Donald Trump, and the ads appear to be having an effect.

According to the president, the job of a political reporter is “more than just handing someone a microphone. It’s to probe and to question and to dig deeper.

Opinion: Trump Has No Idea About Libel Laws

Donald Trump is far better than any other candidate — maybe any candidate ever — at drawing attention without having to advertise for it. But Trump is hardly absent from the airwaves. Like all candidates, he benefits from what is known as earned media: news and commentary about his campaign on television, in newspapers and magazines, and on social media.

How Donald Trump Hypnotizes The Media 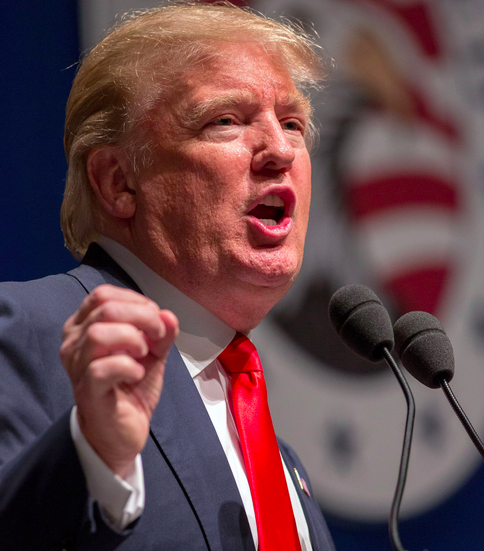 Clearly he’s put a spell on the press. He hasn’t rendered them powerless, of course. Exposés of his business affairs abound, and the commentariat keeps ripping into him like a bandsaw, but the punches don’t seem to land. The first step in breaking that spell? Figuring out how his tricks work.

Is The Media Responsible For Trump’s Rise?

Alas, for all its power, the media did not create Donald Trump. Prior to campaign 2016, he already existed as a cultural force, enjoying greater name recognition than any of the other Republican candidates. Nobody can deny that Trump has shrewdly gamed the media for maximum exposure. But Trump’s skills at attracting publicity do not make a very good paternity case against the media.

Donald Trump said as president he would take steps to make it easier for him to sue the media. The GOP presidential front-runner made the comments during a rally in Fort Worth, Texas on Friday. “I’m going to up open up those libel laws, so when The New York Times and The Washington Post writes a hit piece, we can sue them and win money,” Trump said.

The dispute arose last summer when the Hispanic network decided not to broadcast the Miss Universe and Miss USA pageants then owned by Donald Trump after he made some controversial remarks about Mexicans.

Trump Says Fox Apologized To Him In Feud

Fox News Chairman Roger Ailes, in conversations with Trump, “acknowledged his concerns” about a statement the network had made in the days leading up to the debate, Fox said. But Fox said Trump had demanded a $5 million contribution to his charities in order to appear, which the network rejected.

4 Lessons For Editors From The Trump-Fox Feud

Trump Pulls Out Of GOP Debate On FNC

Donald Trump’s declaration was an unexpected, if not unpredictable, twist in the final days of the Iowa campaign. The real estate mogul had threatened repeatedly to boycott debates before, only to ultimately acquiesce. By picking a fight publicly, Trump assured that even if he goes through with his plan not to show up Thursday, his absence will be the center of attention. Adding intrigue to the Democratic race, the White House said President Barack Obama would host Bernie Sanders for an Oval Office meeting.

Brent Budowsky: “Today we witness one of the greatest scandals in the history of professional journalism. Many of America’s leading television news companies are so fully in the tank for Donald Trump that they should file with the Federal Elections Commission and report their coverage of the 2016 election as political donations to his presidential campaign.”

After claiming for months that he would join other top-tier GOP presidential candidates in running paid television advertisements, the real-estate mogul has reserved about $1.9 million for a seven-day ad blitz beginning Tuesday in New Hampshire and Iowa.