AT&T has responded to a bombshell lawsuit filed by the U.S. Justice Department accusing the conglomerate’s DirecTV unit of orchestrating an illegal campaign to block wide carriage of regional sports network SportsNet LA, home of the L.A. Dodgers. “We respect the DOJ’s important role in protecting consumers, but in this case, which occurred before AT&T’s acquisition of DirecTV, we see the facts differently,” said David McAtee, AT&T general counsel.

Vin Scully To Return To Dodgers In 2014 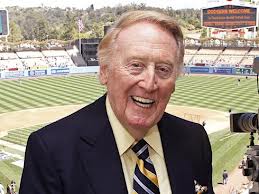 The Dodgers are expected to announce today that Hall of Fame sportscaster Vin Scully will return for his 65th year as announcer. “I really still enjoy it immensely. My health is good, thank God. So why not? And my wife said, ‘Why not?’ as well.