New remote production techniques, distributed workflows and onsite safety protocols have dramatically reshaped sports production. As COVID-19 continues to be a threat, sports producers can expect less travel, trucks staying in place and a slowdown of UHD production until the crisis abates.

Post- and end-of-the-season action for TV sports franchises has seen sharply lower overall viewership as a result of sports competition caused by disruptions in scheduling due to COVID-19, as well as lower persons using television (PUT) data. MoffettNathanson Research says the returning NBA and NHL have been impacted by lower PUT data in August and September versus the April and May periods — the former period being one that traditionally sees lower PUT data.

In a joint statement released Friday, the league and the players association said they would immediately establish a social justice coalition, made up of players, coaches and owners, that would focus on issues such as voting access and advocating for meaningful police and criminal justice reform.

Marv Albert To Sit Out NBA’s Restarted Season In Orlando

NBA owners on Thursday overwhelmingly approved the league’s plan to restart the season with 22 teams at Walt Disney World in Florida in July, according to a person familiar with the voting results. The plan will next be reviewed by the National Basketball Players Association, which has scheduled a virtual meeting with its membership Friday afternoon.

The NBA’s board of governors intends to approve a league proposal on a 22-team format to restart the season in Orlando, Florida, sources told ESPN. The conference call and vote is set for 12:30 p.m. ET on Thursday, sources said.

The National Basketball Association is having what it terms “exploratory conversations” with the Walt Disney Co. about resuming its postponed season. The league issued a statement Saturday on its Twitter account. If the talks bear fruit, the season would resume in late July at Disney’s ESPN complex in Orlando, Fla., as a “single site for an NBA campus for games, practices, and housing,” the statement said.

The NBA has suspended games indefinitely after a player on the Utah Jazz tested positive for the coronavirus, the league announced Wednesday night.

Ratings may be down for the NBA this season, but ad sales for the league’s All-Star Game remain strong. According to Jon Diament, executive VP and chief revenue officer at Turner Sports, commercials for this year’s All-Star Weekend in Chicago sold out faster than ever before at prices that were “significantly higher” than in past years.

The NBA was lagging behind the NFL and Major League Baseball in both revenue and television profile when Stern took over in 1984. But by the time he stepped down in 2014 he had overseen the league’s growth from fears of extinction in the late 1970s to a $5 billion enterprise. TV revenue increased more than 40-fold in that span, crossing the $1 billion threshold. He was 77. Above, Stern is flanked by Hakeem Olajuwon, right, the No. 1 pick overall by the Houston Rockets, and Sam Bowie, the No. 2 pick overall by the Portland Trail Blazers, at the NBA Draft in 1984. (AP photo: Marty Lederhandler)

NBA Isn’t Surprised Its Ratings Are Way Down

Despite a scoring boom and an abundance of magnetic personalities such as Antetokounmpo and James, NBA ratings on ESPN and TNT, through mid-December, were down more than 15% compared with last year. That sharp dip has exacerbated one of the toughest stretches recently for the league, which has been rocked by high-profile injuries, the Hong Kong controversy and former commissioner David Stern’s brain hemorrhage.

Why NBA Ratings Have Air-Balled This Year

The NBA is throwing up bricks in national TV ratings over the first quarter of the regular season. A combination of big stars being absent from national telecasts, a marquee team mostly missing from the league’s two biggest broadcast partners and the fall of a recent dynasty have all factored into the drop. But there’s still time for the league to find its touch.

Less than three weeks into the season, the league’s television partners are still trying to assess the fallout from injuries to the Golden State Warriors.

Katie Nolan, analyst Jay Williams, Snapchat SportsCenter host Gary Striewski and Mike Korzemba, a YouTube influencer who specializes in basketball-related content, will hold forth on a special Game 2 broadcast available only on the ESPN App. ESPN is taking a swing at what is likely to be a growing challenge for sports purveyors of all sizes: A rising generation of viewers is growing accustomed to watching their games in a very different way.

As the NBA post-season action gets underway, strong demand has already gobbled up between 85% and 95% of the inventory on ESPN, ABC and Turner’s TNT with percentage rate increases over last year in the high single digits, according to time buyers and sellers.

NEW YORK (AP) — Quarter-by-quarter pricing has launched on NBA League Pass, allowing fans to purchase games at reduced costs after each period. Single games are $6.99, and that price drops to $4.99 after the first quarter, $2.99 after the first half and $1.99 at the end of the third quarter. The pricing options were […]

The Lakers’ 123-113 victory Wednesday night in Las Vegas was watched by 1.98 million viewers, ESPN said Thursday. A spokesman says that is the most viewers for an NBA preseason game on any network since at least 1994, which is as far back as the records go.

On the eve of the NBA Finals, a ratings postmortem on the regular season reveals that it was professional basketball’s most-watched season in four years. Across the four networks with broadcast rights for the NBA, coverage was up an average 8% for the 2017-18 season — pulling nearly 1.3 million viewers to each game.

The NBA continues to buck the television ratings trend, with both national and local viewership showing impressive gains as the league headed into the All-Star break. Nationally, NBA games on ABC, ESPN, NBA TV and TNT are showing double-digit viewership increases. The combined 15% jump puts the league’s TV viewership at its best mark heading into All-Star weekend since the 2012-13 season.

The All-Star Game picks that will remain private this time around may be televised as soon as next year, according to Golden State Warriors star and resident captain Stephen Curry. “Yeah, we’ve had a lot of discussion around that, and obviously there’s a lot of people in favor of watching [the selections] live, and there’s also people that understand the reasoning behind why it’s not this year.” Yet while NBA commissioner Adam Silver has been the spokesman on this issue, the reality is that the decision to keep the picks private was driven by the players.

Verizon and the NBA have set an expanded, multi-year partnership that will allow U.S. fans to buy and stream live, out-of-market games via NBA League Pass on Yahoo Sports and other Verizon media platforms. 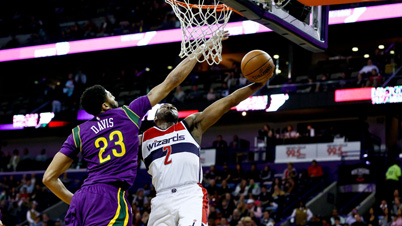 When its new season tips off Oct. 17, the NBA has ample reason for some optimism regarding seeing its audience numbers go up instead of down. That’s largely due to the mix of fascinating storylines spread broadly across many teams.

Despite two lopsided outcomes, Golden State’s two home wins over Cleveland averaged 19.6 million viewers. That’s an increase of 5% from the 18.6 million average in 2016.

While league sponsors snapped up much of the in-game inventory, some newcomers managed to elbow their way into the lineup.

NEW YORK (AP) — TNT will use broadcast teams featuring only former players and no traditional play-by-play men during five NBA doubleheaders later this season. The “Players Only” schedule runs Monday nights from Feb. 27 to March 27 and includes matchups such as Golden State-Oklahoma City on March 20 and Cleveland-San Antonio a week later. […]

NBA Triples Down On Snapchat

The NBA has renewed its agreement and will nearly triple the content it puts on the app for the 2016-17 season. As with last season, Snapchat will cover weekly games with Live Stories, and this year NBA bitmoji and selfie Lenses are also in the mix.

TNT is adding a Monday night doubleheader package to its NBA coverage, starting with an NBA Finals rematch on Martin Luther King Jr. Day. The Cleveland Cavaliers will visit the Golden State Warriors on Jan. 16, returning to the arena where they won their first championship with a victory in Game 7. The Oklahoma City […]