NBC Only Net With Anchor In South Africa

ABC and CBS are keeping top anchors Diane Sawyer and Scott Pelley in New York, where George Stephanopoulos will also be located Tuesday when he anchors an early morning ABC special on Mandela. The moves show how economics and a dwindling interest in international news are changing the biggest broadcast networks, where a decade ago there would have been little question that their most prominent faces would be on hand for such a big story.

Programs on the life and legacy of Nelson Mandela will take their place in ABC and CBS’ primetime lineups this weekend, but there won’t be any changes to their schedules, they will air on 20/20 and 48 Hours, respectively. 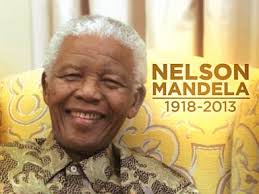 The death of South African leader Nelson Mandela Thursday sent news networks scrambling to cover the legacy of one of the 20th century’s most influential and revered political activists and humanitarians.

South African and American producers say three Nelson Mandela granddaughters will star in a reality TV show. In a statement, South Africa’s New Vision Pictures and Out of Africa Entertainment and U.S. producer Rick Leed say the show is set to debut early next year.

They say it will “highlight the next generation of this unique South African family,” and give a glimpse into their daily lives and conflicts. The producers said Thursday the granddaughters would not speak to The Associated Press. Attempts to reach the three young women were not immediately successful.