Mike “Doc” Emrick, a veteran broadcaster for the National Hockey League and eight-time Sports Emmy award winner, has announced his retirement after 47 years. NBC Sports made the announcement on Monday morning, with Emrick reminiscing on the early days of his career.

New remote production techniques, distributed workflows and onsite safety protocols have dramatically reshaped sports production. As COVID-19 continues to be a threat, sports producers can expect less travel, trucks staying in place and a slowdown of UHD production until the crisis abates.

The NHL has decided to postpone all of its playoff games Thursday and Friday amid the growing sports-led boycotts to protest the shooting of Jacob Blake, an unarmed Black man, by a police officer.TH

Little Caesars has signed a deal to be the official pizza delivery company of the National Hockey League as longtime sponsor Pepsi launches a sweepstakes. The partnership between the league and the pizza restaurant begins immediately and runs through the 2020-21 season. Fans will see the Little Caesars brand displayed in a corner in-ice ad position during every game of the 2020 Stanley Cup Qualifiers and 2020 Stanley Cup Playoffs, as well all exhibition games.

The National Hockey League on Tuesday said its Stanley Cup Qualifiers games will start Aug. 1, with NBC Sports airing up to 120 hours of coverage.

The NHL said Monday that it has reached a tentative deal with its players union for the league to resume its interrupted season. As part of a deal to add four years to its collective bargaining agreement, the league has set August for the start of its playoff-qualifying round. The deal, which still must be approved by the boards of the NHL and the NHL Players Association, sets July 13 for the start of training camps and July 26 for teams to travel to the two “hub cities” of Toronto and Edmonton.

A person with knowledge of the situation said the return-to-play protocols would only go into effect if each side votes to approve the full package of the collective bargaining agreement (CBA)  extension and return-to-play agreement. The person spoke on condition of anonymity because CBA talks are still ongoing.

The NHL still doesn’t know when it will return to the ice, but the league detailed its plan for how it will come back. NHL Commissioner Gary Bettman on Tuesday said that when the NHL returns following its two-month hiatus amid the coronavirus pandemic, it will be via a 24-team playoff tournament. Bettman confirmed that the 2019-20 regular season is officially completed.

NHL: Canceling Season Is A Possibility

NHL Commissioner Gary Bettman has raised the possibility of not being able to complete the regular season: “Nothing has been ruled in and nothing ruled out.”

One day after the National Basketball Association suspended the current season to prevent spreading coronavirus, the National Hockey League has halted its season. The suspension will begin immediately.

TORONTO (AP) — Don Cherry, Canada’s most polarizing, flamboyant and opinionated hockey commentator, was fired Monday for calling immigrants “you people” in a television rant in which he said new immigrants are not honoring the country’s fallen soldiers. Rogers Sportsnet President Bart Yabsley announced the decision following discussions with the 85-year-old broadcaster. “It has been […]

The NHL said Friday it has informed the NHL Players’ Association it will not use its option to terminate the existing collective bargaining agreement next year. The league announced its decision two days before its deadline to notify the union whether it would reopen collective bargaining talks. The union has until Sept. 15 to decide on whether to terminate the agreement as of September 2020, two years before the existing deal expires.

NBC will showcase puck and player tracking as part of its broadcast of the NHL’s All-Star skills competition Friday night and then as the centerpiece of a digital-only broadcast of the All-Star 3-on-3 tournament Saturday night. It’ll be the first chance for American hockey fans to get an up-close look at the system that could be in place as soon as next season.

The league’s has board of governors voted unanimously to award its 32nd franchise to Washington state’s largest city. The yet-to-be-named team will begin play in fall 2021, joining the Los Angeles Kings, Anaheim Ducks and others in the Pacific Division.

NHL Partners With MGM To Share Data For Betting

NEW YORK (AP) — The NHL announced a multiyear agreement Monday to provide MGM Resorts International with data for use in betting, the second major U.S. professional sports league to strike a deal with the casino giant since the Supreme Court opened the way for expanded gambling last spring. Las Vegas-based MGM is the league’s […]

Officials with the Detroit-based organization that owns the Detroit Tigers and Red Wings said Thursday they have put no timeline on a potential launch, but called it a natural extension of the business. The idea comes as it considers renewing or extending its deal with Fox Sports Detroit.

Much like the NBA does on Thursdays, the NHL has tried to make Wednesday its night for must-see TV. Steve Mayer, the NHL’s chief content officer, said Wednesday Night Rivalries proved how special that night can be for the league.

Mleczko To Do Color Analysis For NHL Game

GANGNEUNG, South Korea (AP) — AJ Mleczko understands there is not a lot of women’s hockey on television outside the Olympics. Mleczko took home Olympic gold with the U.S. in 1998 and silver in 2002. She took on a broadcaster’s role for the 2006 Games. And now she will make the transition to men’s hockey […]

Dave Strader, the hockey broadcaster known affectionately as “The Voice,” has died after battling bile duct cancer for more than a year. He was 62. The Dallas Stars said Strader died Sunday at his home in Glens Falls, New York. Strader was a play-by-play man with the Stars and a national broadcaster on NBC Sports. […]

Posing an ever greater competitive threat to pay TV under its first full season under partnership with streaming shop BAMTech, the National Hockey League has unveiled its new-look over-the-top platform, NHL.TV.

A partnership between Twitter and MLB Advanced Media will see live Major League Baseball and National Hockey League games on the Twitter social media platform. The deal announced today by Twitter will see a live, free video stream of a weekly out-of-market game from MLB and the NHL subject to blackouts. While the sides have not yet announced the schedule of when this will take place, it will likely occur in late summer or fall of 2016.

Yahoo and the National Hockey League entered a partnership today to deliver live, out-of-market NHL games for free on Yahoo. Best yet for cord-cutting puck fans, there will be no cable subscription or authentication required.

Jeanneret To Return For Sabres Play-By-Play

Rather than go to trial in a closely followed antitrust lawsuit, the National Hockey League has cut a proposed deal that would allow its fans to spend 20 percent less on a digital package to watch their favorite team. The proposed settlement comes about a month after a New York federal judge agreed to certify a class action that contends that consumers have been forced to pay too much for out-of-market NHL and Major League Baseball games — and that telecasts get blacked out for in-market games thanks to restrictive agreements with the leagues’ broadcasting partners.

Footage from GoPro cameras on players, referees and placed around the rink will be shown as part of the live broadcast of this weekend’s All-Star events. It’s the company’s first such deal with a major professional sports league. While GoPro would not comment on whether other partnerships are in the works, they would make sense.

The NHL has struck a content-sharing deal with GoPro cameras to offer TV viewers player point of view footage via helmet cams this season. The NHL will use GoPro’s POV footage in promo campaigns for the new season starting Oct. 8. The league’s two national TV partners — NBC Sports in the U.S. and Rogers in Canada — will also weave clips into game telecasts to illustrate the shooting, stickhandling and skating skills of NHL stars. 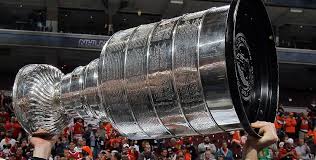 NBC Sports narrowly avoided its worst-case June scenario: a four-game sweep in the Stanley Cup Finals. Had Los Angeles closed the series Thursday, not only would NBC have missed out on a lengthy series full of ad sales, Lord Stanley’s Trophy would have been handed out on NBC Sports Network — a subscription cable channel that pulls in far fewer viewers than the broadcast network.

Rogers said Tuesday that the CBC will keep airing Hockey Night in Canada, and the TVA network in Quebec has all of the Canadian French-language multimedia rights. The league says the deal gives Rogers national rights to all NHL games, including the playoffs and Stanley Cup Final, on all of its platforms in all languages.

With Full Season, NHL Is Back On NBC Sports

A year ago, the National Hockey League was mired in a bitter labor dispute that would eventually swallow up half the season and cost the network its broadcast of the league’s most lucrative event of the year, the Winter Classic. It’s a totally different world today. NBC Sports approaches the new season riding a wave of momentum, coming off the most-watched Stanley Cup Final on record. The new year also offers the prospect of the return of the Winter Classic and the added exposure of NHL players participating in the Winter Olympics in Sochi, Russia, in February.