Producers are being pushed to vet talent and to confront the history of tokenism in the genre: “Networks have treated casting diverse groups of people like fulfilling a quota.”

The drama among influencers at Hype House and Sway House seems like a natural fit for TV. Will the industry bite?

Behind The Fall Of Reality TV Police Shows

After ordering 160 new episodes of its flagship series Cops in May, A&E execs pulled the plug as protests over police violence lead to criticisms of the genre as a “PR arm” of law enforcement.

TikTok has discussed producing a reality TV show built around its namesake video app, according to two people familiar with the company’s plans, part of a drive to broaden its appeal and showcase different ways of using its videos. TikTok has been approached by independent production companies with pitches, and has debated a few ideas for a show internally, said the people, who asked not to be identified because the plans are preliminary.

Can Reality TV Ever Really Be Nice?

NEW YORK (AP) — “Biggest Loser” host Bob Harper says he’s “feeling better” and “taking it easy” two weeks after suffering a heart attack. Harper made the statement on Facebook on Monday after news of the Feb. 12 attack became public. Harper told TMZ he collapsed at a New York City gym and a doctor who […]

Why Did KATV Cut Story From ‘The Bachelor’?

Reality TV’s Future Looks A Lot Like The Past

Despite a dearth of recent breakout hits in the genre, it seems that everything old is new again — and is still working. While predicting the next big hit is an impossible task, reality TV’s producers insist the genre is in good shape, despite the various challenges TV is facing — from time-shifted viewing to increased competition from digital outlets.

Local Minneapolis producer John McCally wants to give some hockey moms their own shot at stardom. He’s looking for interesting, dramatic and fun youth or high school hockey moms and their families to star in a new reality TV show called Hockey Moms. The show will debut Dec. 26 on Hubbard Broadcasting’s KSTC Minneapolis-St. Paul and KAAL Rochester, Minn.

Local Reality Show? WVBT Says ‘I Got This’

Survivor’ Changed TV And Endures. Why?

Survivor premiered on CBS on May 31, 2000. The extreme success of the show officially led to an explosion in the reality TV genre as networks realized the potential gold mine of a programming that was cheaper to produce than scripted shows. Even more amazingly, Survivor endures 15 years — and 30 seasons — later. So, what’s super-producer Mark Burnett’s secret?

NBC has given an eight-episode order to dating-reality show First Dates from Ellen DeGeneres’ production banner and Shed Media. The series is based on a U.K. format that airs on Channel 4.

A New Reality: Hot Girls Raised In The South (GRITS)

Falling ratings, canceled shows and lurid scandals: 2014 was a trying year for reality television, as American audiences wearied of producers chasing success by recycling the same old formats. The question is, will 2015 be any better? Some experts say real life-based TV shows are facing a grim new reality.

BEIJING (AP) — A Chinese online video site says it is bringing the “Big Brother” reality TV show to China. Youku Tudou Inc. said a Chinese version of the program will run for 10 weeks early next year and production is due to start soon. It is collaborating with Endemol China, a new operation that […] 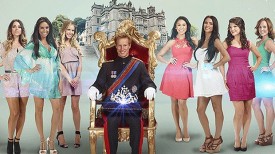 Fox just can’t wait for the fake-out to begin. The network said today that it is bumping up the premiere of its summer reality yarn I Wanna Marry Harry by a week to May 20, following Night 1 of the two-part American Idol finale. The show had been set to bow at 9 p.m. on  May 27.

PITTSBURGH (AP) — What if Orson Welles had directed “Gone With The Wind” instead of Victor Fleming? Frankly, my dear, Hollywood producer Chris Moore gives a damn. Moore plans to answer that question, sort of, through a Pittsburgh-based reality TV series called “The Chair” that he’s producing along with home-grown producer Zachary Quinto and Quinto’s […]

With families such as the Kardashians and those on the “Real Housewives” shows opening up their homes in cities across the country, lawyers to the stars see reality television crews as a weapon that can be used against their clients.

First on the menu: Fox’s Hell’s Kitchen, which names the season 11 winner tonight. Ratings are down, but that’s no different than any other veteran summer reality series.

Today, CNBC premieres Treasure Detectives and The Car Chasers in primetime. Some 7 to 10 nonfiction series are being developed for the evening hours when the Wall Street ticker goes quiet.

Cozi TV, the new network developed by the NBC Owned Stations division of NBCUniversal, today announced that Being Mandela, a new reality television show starring Nelson and Winnie Mandela’s granddaughters, will premiere on Sunday, Feb. 10 at 9 p.m. ET (re-airs at midnight ET). This 30-minute weekly show will follow the experiences of sisters Zaziwe […]

But CBS says it will continue to pursue its claims against top producers of the low-rated reality show, saying they violated confidentiality agreements by going to work on the new series that debuted in June. The season finale is scheduled for Monday.