Scandal, Shonda Rhimes’ primetime political drama series, is jumping from Netflix to Hulu later this month. All seven seasons of Scandal — 124 episodes in all — will begin streaming exclusively on Hulu as of May 20, when the show will no longer be on Netflix in the U.S. The series was created by Rhimes (Grey’s Anatomy, Private Practice) and stars Kerry Washington as political fixer Olivia Pope.

Olivia Pope is coming back to primetime. Scripps-owned diginet Bounce has licensed the broadcast television rights to all seven seasons and 125 episodes of the Peabody- and Emmy-winning series Scandal in a multi-year agreement with the Walt Disney Co. Bounce will air the popular series weeknights at 8 p.m. ET beginning Nov. 12. Scandal stars Kerry Washington as […]

ABC has gotten Grey’s Anatomy superfan Taylor Swift to help promote the return of its TGIT-branded lineup of Grey’s Anatomy, Scandal and How to Get Away With Murder. Timed with the release of Swift’s new single Look What You Made Me Do, the network on Thursday night rolled out the 30-second promo set to the catchy tune.

ABC’s ‘Scandal’ to End With Season 7

The network is expected to announce at next week’s upfront presentation that the Shonda Rhimes drama starring Kerry Washington will end with its previously announced seventh season.

There’s more Shondaland on the way. ABC has picked up new seasons of Grey’s Anatomy, Scandal and How To Get Away With Murder.

Olivia Pope came clean to the world about her relationship with the president on Thursday’s episode of Scandal, and fans went wild on social media.

Scandal at 9 p.m. posted the night’s highest rating, while lead-out How to Get Away With Murder was second. At 8 p.m., Grey’s Anatomy tied Fox’s American Idol for first in the timeslot and third overall for the night.

Scandal star Kerry Washington made a suggestion to creator Shonda Rhimes when Scandal debuted in 2012: Get the cast to religiously use Twitter to generate buzz. Rhimes quickly sent out an email to her tightknit crew to crank up the social media. A phenomenon was born that got the attention of the network’s top brass and Hollywood’s television industry. 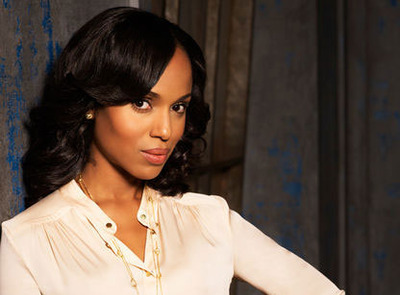 ABC‘s D.C. fixer drama Scandal has built big ratings in three seasons with a potent mix of often ridiculous plot twists and creator Shonda Rhimes’ savvy use of social media, which has bound fans closely to the show and its stars. That combo has paid off: Ahead of Thursday’s season finale, Scandal has added 3 million viewers (for 11.5 million total). It’s up even more in the key adults 18-49 demo, up 43% compared with last season, according to Nielsen.

Thursday night’s top two shows — Scandal and Grey’s Anatomy — lead ABC to win the ratings race. Ratings for CBS’s March Madness coverage were down by more than 30% from last year.

TV viewing levels were down dramatically as children were trick-or-treating through the neighborhood. ABC came in first averaging a 2.6, led by Scandal at 10 p.m., which finished as the top show of the night. An hour earlier, Gray’s Anatomy drew a 2.6, down 7% from last week. The end of the MLB season hurt Fox, which ran a special recap of The X-Factor contestants, scoring a 0.7. CBS, which came in second, ran a rerun of The Big Bang Theory. The Millers and The Crazy Ones dropped to a 2.0 and 1.9, respectively.

The third-season premiere of ABC’s Washington-centric political thriller Scandal reverberated beyond the Beltway, ranking at the top of the new Nielsen Twitter TV ratings with nearly 713,000 tweets about the episode reaching a Twitter audience of 3.7 million.

ABC on Sunday further clarified which of its programming would be broken up into two uninterrupted blocks of 12-episode runs, in addition to announcing its midseason schedule. Grey’s Anatomy, Nashville, Once Upon a Time, Revenge and Scandal will receive the split-run treatment.

The debate over violence on TV is heating up, with the Parents Television Council attacking ABC for a “graphic and disturbing” torture scene on the political drama Scandal.

Following its three-script order earlier this month, ABC’s freshman comedy The Neighbors has received a back 9 order for a full-season 22 episodes run. Also getting a back 9 is sophomore ABC drama Scandal.

‘Once Upon a Time,’ ‘Revenge,’ ‘Scandal’ On Netflix