As Jim Thompson announces his retirement at the end of 2022, he and Tim McCarthy will serve as co-presidents for a year, after which Thompson will move into a consultant role.
By TVN Staff | October 6, 2021 | 10:38 a.m. ET.

Broadcasting veteran Jim Thompson, president of the Broadcasters Foundation of America since 2009, has announced his retirement at the end of 2022. In conjunction with that announcement, the Broadcasters Foundation has unveiled a succession plan whereby Thompson and broadcast veteran Tim McCarthy will serve as co-presidents through 2022, at which time Thompson will move into an active consultancy role.

The search committee unanimously chose McCarthy as the best candidate for the position, and the board of directors unanimously endorsed him and the succession plan. The announcement came from Scott Herman, chairman of the Broadcasters Foundation, and goes into effect Nov. 1. 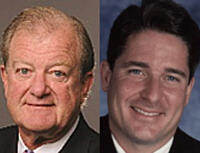 “I have known Tim for almost 20 years,” Herman said. “He is an outstanding leader and I look forward to working with him and Jim for a seamless transition. “Jim has done a phenomenal job getting the word out about our mission and increasing the number of broadcasters we help. The entire board and I are delighted that he will remain with the foundation as co-president and then as a consultant.”

“Serving the mission of the Broadcasters Foundation has been the most rewarding experience of my career,” Thompson said. “I cannot think of a more worthy task then helping our colleagues in their darkest moments. The search committee and the board have made an excellent choice in Tim — I know I will be leaving our mission in good hands.”

“I look forward to working with Jim and the entire board to continue the important work of the Broadcasters Foundation,” McCarthy said. “I have been in broadcasting throughout my career, and it is an honor to be in a position to give back by providing aid to those in our industry who need it most.”

A philanthropist who gives back to the broadcast industry and the community, he has been recognized as Man of the Year by The Epilepsy Society of New York (2004) and received Disney’s Points of Light Volunteer Service Award (2014). He has conducted fundraisers for numerous charitable causes, including The Chris McCarthy Golf Outing, which raises money for kids with epilepsy, and served as The Voice of 9/11 Dinner chair.

Thompson is well-known across the broadcast industry. During his 40-plus year career, he was president of Westinghouse Broadcasting’s radio division, president and co-owner of Liberty Radio Group and general manager of KYW-TV Philadelphia.

The Broadcasters Foundation has distributed millions of dollars in aid to broadcasters who have lost their livelihood through a catastrophic event, debilitating disease, or unforeseen tragedy. Personal donations can be made to the Foundation’s Guardian Fund, corporate contributions are accepted through the Angel Initiative, and bequests can be made through the Foundation’s Legacy Society. For more information, please visit, call 212-373-8250, or email [email protected].