As the NBA post-season action gets underway, strong demand has already gobbled up between 85% and 95% of the inventory on ESPN, ABC and Turner’s TNT with percentage rate increases over last year in the high single digits, according to time buyers and sellers.
By John Consoli | April 17, 2019 | 5:00 a.m. ET. 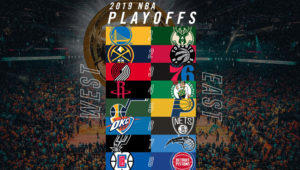 Even though viewership of the National Basketball Association was down 8% during the regular season, marketers have lined up to take part in the post-season action that got underway last Saturday.

Strong demand has already gobbled up between 85% and 95% of the inventory on ESPN, ABC and Turner’s TNT with percentage rate increases over last year in the high single digits, according to time buyers and sellers.

“The NBA playoffs are still a marquee event that attracts a loyal and hard to reach demographic,” says Jeff Gagne, SVP, strategic investment at Havas Media, “and most advertisers won’t shy away because the regular season was down.”

“We’re pacing ahead of last year,” says Jim Minnich, VP, revenue & yield management, Disney Advertising Sales, referring to ESPN and ABC, which are sold jointly under the Disney umbrella. “Games 1, 3 and 4 of the Western Conference finals are already sold out.”

Jon Diament, Turner Sports EVP, says: “We are going into the playoffs with more momentum sales-wise and have done a lot of business with the NBA official marketing partners,” which account for about 20% of overall sales.

Minnich and Diament agree the playoffs allow advertisers in multiple categories to engage with a younger, more diverse and harder-to-reach-on-TV male audience at a time of the year when not much else is working on television.

For the championship finals, on ABC alone, spots are going from between $400,000 to $500,000 for the early games, according to buyers. Prices will rise for games 5-7 if the series advances that far.

Diament says AT&T, which now owns TNT parent Turner, will be a big spender — it has replaced Verizon as the official NBA wireless sponsor.

The other category that spends lots of money every year in the playoffs is movies, with the studios generally waiting to run their spots until late in the playoffs, closer to the movies’ summer premieres.

“We try to accommodate the studios as best we can,” Minnich says. “We are open to executing longer form ads and trailers for them.”

The ABC O&Os in San Francisco, Houston and Philadelphia are in good position to benefit from the playoffs with the teams in those markets expected to make deep runs.

O&OS and affiliates may pick up some ad dollars from the nascent gambling category, Minnich says, declining to identify specific advertisers.

Minnich says ABC stations are also pulling in NBA playoff ad dollars from political advertising in certain states and markets, while they are also getting some national advertiser dollars in the beverage, telco and consumer packaged goods categories.

“The strength of the NBA is national, but it is also hot for advertisers in local markets,” Minnich says. “If an advertiser wants to be in the Top 10 markets, which includes both ABC-owned and non-owned stations, we will work with those non-owned stations to produce an ad package.”

Many blame an injury to Lakers’ superstar Lebron James on Christmas Day for the lackluster ratings. James had been scheduled to appear in 43 televised games on the various networks, but missed a majority of them.

However, both media buyers and the networks say regular-season ratings have minimal impact on the post-season. And there are a number of reasons for that.

First is that the playoffs all involve the better teams with stars playing head-to-head every night, while the regular season has many less important matchups throughout. And even with Lebron missing this playoff season, there are numerous superstars like Steph Curry and Kevin Durant of the Golden State Warriors, the returning champs.

Buyers also say many NBA players have huge social media followings that help draw viewers — particularly younger ones — in for the playoffs.

“The league has done a great job in allowing its players to go onto social media and interact with each other and the fans,” says Neil Vendetti, president of investment at Zenith.

Last year’s NBA finals on ABC was a four-game sweep of the Cleveland Cavaliers by the Golden State Warriors. The games averaged 17.6 million viewers, down 14% from the 2017 finals average, which went five games. Even so, nothing else on TV came close.

So even if there are some upsets that eliminate popular teams along the way, the NBA playoffs will be the place to be through now and the first week or two of June. The finals begin May 30 and, if they go seven, end on June 16.

“Ratings in the regular season mean nothing in the playoffs,” says Zenith’s Vendetti. “Relative to whatever other TV programming is on during the playoffs, the NBA will get the biggest audiences of anything on TV.”