BIA Advisory Service estimates $6.55 billion will be spent in local political advertising in 2020.

The firm forecasts that over-the-air (OTA) television will earn the majority of the ad spend (47%) at $3.08 billion. Online/digital outlets will receive $1.37 billion (21%), while $919 million (14%) will be spent on multichannel video programming distributors (MVPDs) and just over $312 million (4.8%) will go to radio. The balance will go to other media. 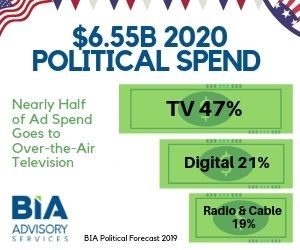 “It’s going to be a very interesting political year where some very large markets will not see much in political advertising while some small markets will see an extraordinary amount of advertising due to competitive gubernatorial, Senate and House races along with the presidential election,” said Mark Fratrik, BIA’s chief economist and SVP. “Campaigns will continue to rely on television as a dominant platform for advertising while supplementing with digital advertising across mobile and desktop.”

BIA’s forecast indicates the amount of political advertising will vary significantly from market to market based on the size of the market and specifics of local elections.

The three top local political revenue generating markets will be Los Angeles, Phoenix and Philadelphia. In each market, TV OTA will receive more than $130 million in advertising with online/digital ad spend getting over 25% of the total spend. Direct mail, normally a dominant medium in other categories, will capture only a small percentage of market spend in general.

“In some of the smaller markets, one thing to keep an eye on is how the huge volume of political advertising could crowd out other local advertisers during primary and general election seasons,” said Fratrik. “That may have an impact on advertisers and media companies, and we’ll certainly factor that into our forecasting as we go through the fall.”