Political and over-the-top advertising, plus growth in mobile and social ads will be key elements in local media next year.
By TVN Staff | November 6, 2019 | 8:20 a.m. ET.

In its newly released U.S. Local Advertising Forecast 2020, BIA Advisory Services estimates total local advertising revenue in the U.S. will reach $161.3 billion in 2020, up from $152.5 billion this year, representing a growth rate of 5.8%.

“The expectation of an aggressive presidential election next year, along with primaries and state-wide races, indicate that political ad spending will be a serious driver of local ad revenue next year,” said Mark Fratrik, chief economist and SVP at BIA Advisory Services. “Combine these factors with the ongoing growth of mobile and social advertising and the emergence and future significant advancement in over-the-top advertising, the revenue landscape for next year looks robust.” 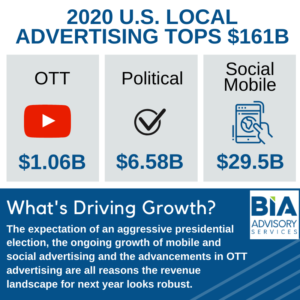 Key findings from the forecast include:

Political Advertising: $6.58 billion will be spent in local political advertising in 2020. Most of the ad spend will be spread across:

“Political advertising will vary significantly based on the size of the market and specifics of local elections,” said Fratrik. “As a point of reference, in each of the three top local political revenue generating markets (Los Angeles, Phoenix, Philadelphia), OTA television will get close to 47% of the political ad spend across the markets, with online/digital getting close to 22% of the political spend.”

The forecast also projects significant ad spending in native social advertising next year. Social media ad revenues from all forms of mobile devices now represent about 93.8% of total social ad spending and will grow to nearly 96% by 2024 as more user activity shifts away from desktops to portable devices. The mobile native/social segment of mobile advertising is the fastest growing area, forecasted to grow 13.9% from 2019 to 2024.

“We’ve been carefully charting the growth of mobile and social to track its growing importance to national and local advertisers and its ability to precisely target and reach local consumers,” said Rick Ducey, managing director of BIA Advisory Services.

“Now, we expect the emergence of OTT to grow quickly because it can deliver the type of targetability and tracking advertisers require today. Plus, it will give local television stations the opportunity to increase their online revenue. We are tracking this and more in our 2020 forecast to help businesses more precisely understand where ad dollars are going and plan accordingly.”