Jacksonville Jaguars owner Shad Khan has become an investor in the nascent cable news network founded by J.C. Watts Jr. and Bob Brilliante prior to its launch next month.
By Brendan Farrington | October 2, 2019 | 10:37 p.m. ET. 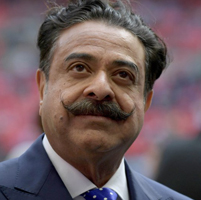 TALLAHASSEE, Fla. (AP) — Jacksonville Jaguars owner Shahid “Shad” Khan disclosed Wednesday that he will be the majority investor in the nation’s only 24-hour news network aimed at African American viewers, giving the network a deep pocket as it launches next month.

The network has been in the works for years and an announcement about its launch was made earlier this year. But Khan’s backing gives it a substantial boost.

“I am a big believer in the fact that we have a number of communities, obviously especially the African American, who are underserved,” Khan said in a phone interview. “We know the mission, but I’m hoping that as time goes on this becomes a bridge to connect all the cultures, including obviously south Asian, which I am. This is a great worthwhile cause. I want to see it happen.”

He declined to say how much he would invest initially but said it would be enough to keep the network running for a long time.

“It’s significant, and frankly it’s open ended. The investment continues to make sure that not only are the bricks and mortar, the equipment are really what it takes to make an excellent product, but also the people on the air and the programming costs,” Khan said. “It’s whatever it takes.”

Khan is worth an estimated $8 billion and made his fortune in the auto equipment industry. As well as the Jaguars, he owns Fulham Football Club of the English Football League, Four Seasons Hotel Toronto and All Elite Wrestling.

Former Republican U.S. Rep. J.C. Watts, who was a star quarterback at the University of Oklahoma in the 1980s, will be chairman of the new network. It will be available via cable and satellite viewers in 33 million households.

“When Shad and I were kids, they had three networks in the U.S. and today you have venues that you can speak to every demographic in the country in terms of news, but … there’s no venue for the African American community to have a dialogue to talk about cultural things … or news in general,” Watts said in the conference call with Khan. “This platform will create that, and we’re tickled that Shad has chosen to come alongside us and walk with us in this effort.”

The network has agreements with Charter Communications, Comcast and DISH and will be carried in major African American markets such as New York, Atlanta, New Orleans, Chicago and Los Angeles. The network is to begin broadcasting in November and will be based in Tallahassee, Florida’s capital, with bureaus around the country, Watts said.

While Watts is a Republican, he said the channel will be about African American culture and won’t cater to political ideologies. Former Democratic Tallahassee Mayor John Marks is part of its management team.

“We’re not looking to be Republican or Democrat. Obviously, there will be current affairs, but we are culturally specific to the African American community. MSNBC, Fox News, CNN _ they may have African American faces on their news shows, but they are not necessarily covering the community from a cultural perspective,” Watts said. “We’re not looking to be left or right.”

He said topics that have gone undercovered elsewhere will get network attention, including news about historically black colleges and universities and sickle cell disease, which affects African Americans.