The cannabis business presents strong opportunities for broadcast’s core advertising, but it’s a legal and regulatory minefield. Still, there’s hope broadcasters can get a much-needed safe harbor to accept ads for properly vetted CBD and marijuana products via banking legislation in the Senate.
By Harry A. Jessell | November 22, 2019 | 5:51 a.m. ET.

At TVNewsCheck’s TV2020 conference last month, on a panel of top station group execs, the discussion turned to the need for a fat new ad category to push core advertising growth solidly into the black.

Patrick McCreery of Meredith said that category could be cannabis, marijuana and the various CBD products, but that no broadcaster wants to “touch it with a 10-foot pole” because of the uncertainty surrounding its legality.

“When I got the keys to my first station, I was told not to lose the license,” he said.

Nexstar stations have turned away cannabis business, said the group’s CEO, Perry Sook. “We are a federally regulated business just like the banks,” he said. “Until it’s deemed OK to do business with these folks, we are at risk.”

McCreery, Sook and their peers are wise to proceed with caution. The cannabis business is fraught with legal and regulatory hazards that could jeopardize their FCC licenses and possibly expose them to criminal charges.

But if broadcasters can get their political game in gear, they might be able to piggyback on legislation now pending in the Senate and create a barrier against legal and regulatory trouble and make it possible to reap cannabis advertising dollars.

When we talk about commercializing cannabis, we are talking about two similar, but different plants — marijuana and hemp. For years, they were lumped together by the feds, but they are now on diverging legal and regulatory paths.

Marijuana contains high levels of THC, the psychoactive compound that gets you high and has certain medical benefits. Hemp has low levels of THC (less than 0.3%), not enough to get you high, but it’s loaded with another compound, CBD, which, if you believe the hype, has all sorts of health benefits when mixed into foods, drinks and topicals.

Fearing what the plants were doing to the youth of America, the feds outlawed both in 1937. Further widening the generation gap, the Nixon Administration in 1970 put them, along with LSD, in the same drug-enforcement category as heroin. 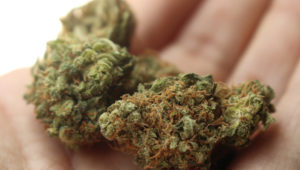 But over the last decade, pot proponents have made tremendous progress in bringing cannabis into the mainstream of American life. Eleven states have now legalized cannabis for recreational use and they and 22 others have approved it for medicinal use.

The problem is that the feds are having a tough time letting go. It’s as if, after all those years of arresting people and putting people in jail for smoking pot, the federal criminal justice system can’t just say “nevermind.”

Producing, distributing and possessing marijuana is still a felony under federal law and that is unlikely to change anytime soon, despite what’s happening at the state level. The congressional votes just don’t seem to be there right now.

However, the Farm Bill of 2018 removed hemp from the federal list of controlled substances, providing a legal pathway for CBDs. Butproducing and marketing hemp-derived CBD products are still subject to a tangle of unsettled regulations involving the Department of Agriculture, the Food and Drug Administration and the Federal Trade Commission.

As a result, CBD products are unlikely to generate much advertising in the immediate future.

On Oct. 31, two weeks after the station group exec panel, the USDA took a big step, issuing interim rules governing hemp production as required by the 2018 Farm Act that legalized hemp. The rules should spur the production of hemp and CBD that began on a limited experimental basis with the passage of the 2014 Farm Act.

But communications attorney David Oxenford tells me that CBD advertising will be limited because of regulatory tangle. As he reads the tea leaves, stations in states that have legalized CBD may accept ads from reputable retailers promoting products that are not intended to be ingested, that make no specific health claims and that are not in programs aimed at children.

In other words, they are restricted to advertising CBD skin creams and bath bombs to adults from properly regulated sources. He would advise clients to turn away all spots for CBD-laced tinctures, oils, drinks, foods, supplements, gummies and vapes.

The chief culprit in holding up consumable CBDs is the FDA, which is charged with making sure that products you put in your body are effective and safe. It appears to be in no hurry to approve CBDs for eating, chewing, drinking and smoking, although it recognizes that the internet marketplace is already awash in them.

And the agency has been warning companies that have been marketing such products. “Selling unapproved products with unsubstantiated therapeutic claims is not only a violation of the law, but also can put patients at risk, as these products have not been proven to be safe or effective,” the FDA says on its website.

If cannabis companies can’t clear products with the FDA, they really can’t advertise them.

Today, the cannabis business is a legal and regulatory minefield. Broadcasters and other companies doing business with cannabis companies do so at their own peril. Even those with the best counsel could inadvertently trip one of those mines.

What broadcasters need is a safe harbor that would allow them to accept ads for properly vetted CBD products throughout the country and for marijuana products in states where they are legal without risk.

And there is a way to get one.

The House has passed — and the Senate is actively considering — legislation that would provide such a safe harbor to federally regulated banks doing business with cannabis companies.

To date, the banks have shunned cannabis businesses for the same reason broadcasters have, federal laws and regulatory restrictions. This has been bad not only for the banks, but also for the cannabis industry, its employees and the federal treasury.

At a hearing before the Senate Banking Committee last July, Senator Sherrod Brown (D-Ohio) spoke for the legislation. “Without access to the banking system, legal cannabis businesses are forced to operate in the shadows, dealing in large amounts of cash,” he said. “This puts a robbery target on the backs of workers and creates a safety hazard for communities. It can also make it harder to monitor transactions and combat money laundering.

“And getting paid in cash means it’s difficult to get a credit card, prove your income to get a loan, or even keep your personal bank account. That can force workers to turn to shady outfits like payday lenders and check cashing services that charge high fees and interest rates, or trap people in a cycle of debt.”

And it is not lost to anybody in Congress that in an all-cash industry, it is hard to track and collect taxes and regulatory fees.

The legislation (S. 1200), which enjoys bipartisan support, is being driven by the American Banking Association and the budding cannabis industry and, from what I can gather, it has a fair chance of passage, if not this year than early next. Banking Committee Chairman Mike Crapo (R-Idaho) has said he wants to move the bill to the president’s desk.

So, I say why not expand the legislation to include broadcasters so they, too, can provide services to cannabis companies — that, is, advertising services — without having to worry about violating some murky law or regulation?

Makes sense to me. All it takes is some clever legislative language and the political will to muscle it into the banking bill. I don’t know if the banks and other advocates would welcome broadcasting horning in on their legislation, but they might. A final push from broadcasters might be all the legislation needs.

I have seen all kinds of research reports on how big the cannabis business is expected to grow over the next several years. The forecasts all run into the tens of billions of dollars.

It’s going to be a highly competitive industry. Marketing and advertising dollars will flow. Getting just a fraction of them would make for a badly needed new ad category for broadcasters.

Broadcasters could start small with ads only for CBD products….hopefully keeping the creative subdued and classy…and then build from there…