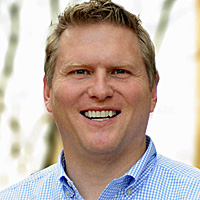 And, they’re cost-effective. TV stations repeat forecasts frequently — i.e., weather on the 1s (every 10 minutes) — with text-only crawls on the bottom of the screen. These simple ads are easy to edit and go live instantly, allowing advertisers to make and change offers quickly.

While weather advertising has been around for a while, new technology on the market makes it faster and easier than before to automate buying and selling local spots, to make inventory changes, make pricing transparent for faster transactions and to see what’s posting in real time.

Why Local Weather TV Is Hot

Eighty-seven percent of people who don’t stream TV — and 82% of people who stream programming through their TV set (typically younger audiences) — continue to watch broadcast TV during any given month, according to Nielsen’s Local Watch Report from August 2019. When they could stream, many people still preferred the local news.

In 2018, there were 2.8 million stories covering the hurricane season in the United States, according to Last Year in America, a 2018 report by We Are Broadcasters. In Florida alone, there were 268,660 stories.

In this digital age, why are we still seeing growth for weather viewership? In this opinion piece on NPR, Why Did I Watch Fourteen Hours Of The Weather Channel? I’m Not Sure, the writer speculates why she spent a whole day watching hurricane coverage. She explored her own anxiety as well as her interest in watching journalists fight the elements and their passion for weather science.

Three Gray Broadcasting stations in Alabama and Georgia reported on treacherous tornadoes, warning people to take cover because their lives depended on it. Sadly, the tornados killed 23 people. But without the warnings, it could have been more.

As Hurricane Harvey wreaked havoc on Florida and Texas in 2018, broadcasters never went off the air, warning people to get to safety. For those who weathered the storm in place, local stations were a lifeline for people looking for food, water and shelter.

This year, stations including Tegna’s KHOU and Graham Media’s KPRC were honored for being “first informers,” providing life-saving information during the hurricane. When they reported that there were not enough first responders to help everyone who needed help, people launched their own rescue missions, helping others with their own fishing boats, rafts and jet skis.

It was good to see these stations and reporters recognized for their critical roles during natural disasters.

With continuous change in the industry, advertisers continue to seek the best ways to reach viewers across many diverse formats. The popularity of weather broadcasting has a long history in the U.S. And according to Pew Research Center, local news remains the most preferred place for people to get their news, capturing the attention of all ages.

Our local TV stations will continue to provide live coverage like nobody else can. Local broadcast news and weather advertising will continue to be a solid advertising strategy for years to come. And, a great way to support the people who risk their lives to save ours.

Brad Smith is SVP of revenue and operations at Videa where he oversees sales, revenue management, operations, data science and finance. Prior to Videa, Smith spent four years at Cox Reps as SVP of finance and operations. He has also held leadership positions at GE, NBCUniversal and Four Points Media. Smith is a member of TVB and holds a degree in economics from Hobart College.

People in Alabama still remember the April 2011 tornado outbreak that killed over 250 in the state that day. We’re still gun shy (& will be for a long, long time) as local meteorologists are still asked if an expected “outbreak” will be as bad as that horrible day. Wasn’t the local Mets fault as that was a generational outbreak coupled w/early morning storms that took down power lines to a quarter of the state’s population, leaving them in the dark abt that afternoon’s storms.

When the TV Met I usually watch retires (horror) I ‘ll migrate over to two other local channels.