Retrans and its derivative net retrans (retrans less reverse comp payment to broadcast networks) will grow at healthy clips for the next few years, she said. Retrans will experience a compound annual growth of 12%, while net retrans climbs at a 5% rate. But starting in 2024, by her reckoning, the rate of growth for retrans falls to 7% and net retrans goes flat.
By TVN Staff | September 27, 2019 | 2:26 p.m. ET.

NEW YORK — Securities analyst Marci Ryvicker of Wolfe Research is generally bullish on the publicly traded station groups that she follows, but, in a speech at the TVB Forward Conference in here yesterday, she admitted to serious concerns.

Retransmission consent revenue “could be a risk longer term,” she said.

Retrans and its derivative net retrans (retrans less reverse comp payment to broadcast networks) will grow at healthy clips for the next few years, she said. Retrans will experience a compound annual growth of 12%, while net retrans climbs at a 5% rate.

But starting in 2024, by her reckoning, the rate of growth for retrans falls to 7% and net retrans goes flat. 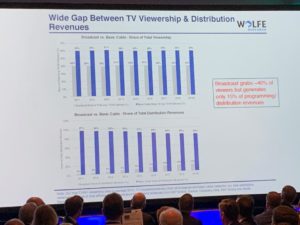 The principal reason is cord cutting. Retrans revenue is based on the number of satellite and cable subscribers and, according to Rivicker, their number is dwindling at a rate of 6.6% a year for the foreseeable future.

That loss is only partially offset by the 2% growth in skinny streaming bundles or vMVPDs, which, like cable and satellite, pay for carriage of broadcast signals, she said. The net annual subscriber loss is 3.8%.

Another problem is that broadcast signals are getting expensive and there may be a limit on how much broadcasters can demand.

Like broadcasters, she believes that broadcasters should get a share of the MVPDs programming payments proportional to the TV audience that the deliver. Right now, broadcasters only get 15% of the payment, even though they account for 40% of the audience. he said.

But if the Big Four affiliates actualy got 40% of the payments, they would get a combined $28 a month or $336 a year, she said. “There is such a thing as outpricing the consumer.”

To underscore her point, she posted a slide that said in all caps and red: “Is the consumer really going to pay $28/month ($7/Big Four) For something he/she can effectively get for free (via antenna)?

The other troublesome aspect of the business is non-political or core advertising. For the second straight non-political year, core was problematic — down 1% in 2017 and “flat to slightly down” this year.

The auto category, the largest core contributor, is the chief culprit, she said. “In general, auto advertising feels permanently impaired.”

And the roll off is not only because car sales are down, he said. “I know that TV is fairly better off than a lot of other media, but it’s something that has to be paid attention to.”

And, she cautioned, a recession is coming. It’s a question of when, not if. “You have to think about this.”

So, what’s the good news?

Well, political for one thing, she said. According to her discussions with broadcasters, candidates and their supporters may pump $1 billion more (33% more) into TV stations than they did in the last presidential year of 2016.

And legalized sports betting is still promising to be a major category. It could add $1 billion-$2 billion to broadcasting coffers in the short term; $3 billion-$5 billion in all 50 stations choose to allow it.

She said she has heard all the talk about automated selling and impressions-based selling and believes that it could boost ad revenue, but she had no projections on how much.