Scripps Names Marcellus Alexander To Board

The former NAB and station executive has more than 40 years of experience in broadcasting, communications and government relations.
By Mark K. Miller | August 6, 2019 | 10:48 a.m. ET. 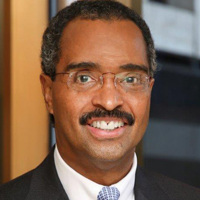 Alexander, 67, is a seasoned media executive with more than 40 years of experience in broadcasting, communications and government relations.

Prior to his work at NAB, Alexander was vice president and general manager of television stations including CBS-owned KYW in Philadelphia and WJZ in Baltimore.

In his most recent role at NAB, Alexander was responsible for working with broadcast operators across the industry to help shape the NAB’s legislative and regulatory agenda. Under his leadership at the NABLF, Alexander helped the organization advance the business of broadcasting through education, professional development and diversity initiatives as well as a focus on community service and journalism’s First Amendment protections.

“Marcellus is an established leader in broadcast media who will bring his experience and deep understanding of the continued evolution of our business to the boardroom as we further expand our footprint across the country,” said Scripps President-CEO Adam Symson. “His passion for educating and teaching other young leaders in the industry resonates with Scripps’ longtime motto, ‘give light and the people will find their own way.’ ”

A native of Austin, Texas, Alexander holds a bachelor’s degree in speech and journalism from Texas State University.

Alexander serves on the advisory board for The Media Institute of the Caribbean, whose key initiatives include developing a business case for investigative reporting in small-nation islands. He also has held positions on boards including the International Radio and Television Society, Howard University’s Cathy Hughes School of Communications, the Washington Urban League, the Thurgood Marshall Center Trust and the Emma Bowen Foundation.

With the addition of Alexander, Scripps has 12 members on its board of directors. Roger Ogden has informed the company he intends to retire when his term expires on the date of the board’s annual meeting of shareholders in 2020. Ogden has served on the board since 2008. Upon his retirement, the number of directors will return to 11.