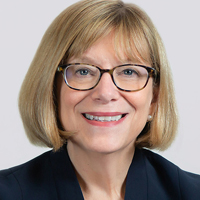 Kathleen A. Kirby was voted secretary and general counsel to the Broadcasters Foundation of America during today’s virtual meeting of the board of directors. Kirby, who is a partner with the Washington law firm Wiley Rein and co-chair of the firm’s Telecom, Media & Technology group, takes over secretary and general counsel duties from Richard Bodorff, who will remain on the board.

Kirby’s practice involves advising some of the country’s largest media groups on regulatory and policy matters, representing radio and television stations in connection with the full realm of FCC compliance, and counseling clients on the sale and acquisition of broadcast properties.

“Kathy’s advice will guide us on the many legal and regulatory issues of our 501(c)3 charity,” said Chairman of the Board Scott Herman. “We’re grateful she will join us in her new capacity as the board continues to put our time and energy into raising money to help our colleagues in need. I also want to thank Dick for his many years of service as secretary and general counsel. We’re delighted that he will remain on the board.”

Kirby has long served as counsel to the Radio Television Digital News Association, advising electronic journalists on a variety of legal and legislative matters, including freedom of information, privacy, libel, content regulation, copyright, and other First Amendment issues.  She is an inductee of the National Freedom of Information Hall of Fame and recipient of RTDNA’s First Amendment Leadership Award. Kirby is regularly rated by Chambers USA as one of Washington’s “Leading Lawyers” in her field and has been recognized by Law 360 as a Legal MVP.

Before attending law school, Kirby worked for almost a decade as a radio broadcaster in her native New York and in Connecticut, where she gained extensive experience first as a reporter and news anchor, then in management positions in operations, sales, and marketing.

Kirby obtained her J.D. degree as a Dean’s Scholar from the Catholic University of America, where she served as executive editor of the Catholic University Law Review. She received her bachelor’s degree in accounting and marketing from the University of Virginia, where she was instrumental in founding one of the country’s first student-owned and operated commercial radio stations.  She continues to advise WUVA-FM as a member of the station’s alumni interest group.

Kirby serves on the Media Institute’s First Amendment Advisory Counsel and is an active member of both the Federal Communications Bar Association and the American Bar Association’s Forum on Communications Law and has held leadership positions within both throughout her career, including in governance, as chair of the FCBA Foundation, and as chair of the annual Representing Your Local Broadcaster program at the NAB Show.