The broadcast executive with nearly 20 years of leadership experience will oversee the broadcast and digital operations of Nexstar’s KSNT, KTMJ and the company’s operational agreements with Vaughan Media’s, KTKA.
By Mark K. Miller | June 14, 2021 | 3:31 p.m. ET. 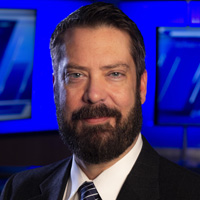 Nexstar Media today appointed James Baronet vice president and general manager of its broadcast and digital operations in Topeka, Kan. (DMA 142). He will be responsible for overseeing Nexstar’s KSNT (NBC) and KTMJ (Fox), as well as the company’s operational agreements with Vaughan Media, providing services to KTKA (ABC-CW).

Baronet brings nearly 20 years of broadcast programming, sales, and marketing leadership experience to his new post. Today’s announcement represents a homecoming of sorts for Baronet, who previously was the VP-GM of Nexstar’s WVLA (NBC) and WGMB (Fox-CW) Baton Rouge, La., from 2014 to 2016. While overseeing the stations, Mr. Baronet and his team were responsible for rebuilding the stations’ news organization and expanding its local newscasts to six-and-a-half hours per day. He also helped establish the stations’ first news bureau at the state capital, launched a Sunday morning political affairs program, helped produce two gubernatorial debates broadcast across Louisiana, and led the early efforts to construct a master control hub servicing multiple Nexstar stations in the region.

In addition, Baronet spearheaded the creation, development and production of a variety of local programming, including a series of sports specials centered on the area’s professional and college football teams, the New Orleans Saints and the LSU Tigers, and Louisiana Haunted History, a half-hour advertiser-sponsored show devoted to exploring allegedly haunted locations across the state.

Prior to joining Nexstar, he held a variety of sales and marketing positions of increasing responsibility in Waco, Texas; Jackson, Miss.; and Evansville, Ind.

Baronet earned his BFA in journalism from Sam Houston State University in Texas. He has been an active participant in industry-related and community groups throughout his career, including serving on the board of the Sales Action Committee for the Fox Network.

The Peter Principle in full bloom..Man, is America a great country!!!

I guess a warm body is better than a cold one!!