The sales director of Scripps’ KMGH Denver is chosen to succeed the retiring Bob Hermes at the helm of the group’s CBS affiliate in Missoula, Mont.
By Mark K. Miller | November 17, 2020 | 7:51 p.m. ET. 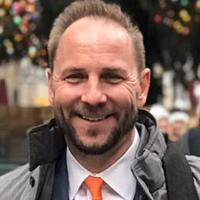 Scripps-owned CBS affiliate KPAX Missoula, Mont., has promoted Brian Joyce to vice president and general manager, effective Dec. 14. He succeeds Bob Hermes, who is retiring as VP-GM in January after 40 years in broadcasting. Hermes joined KPAX as a sales manager in 1987 and was promoted to his current role in 1997.

Joyce launched his broadcast career in Texas as a sports journalist for KETK Tyler before moving into sports director roles at KBTV Beaumont and KYTX Tyler.