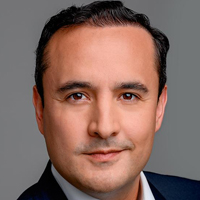 Telemundo Global Studios today promoted Juan Ponce to senior vice president and general manager of its recently launched Telemundo Streaming Studios, which it calls “the first-ever studio in Hispanic media exclusively dedicated to serving the growing Latino streaming audiences in the U.S. and around the world.”

In this new role, Ponce will continue to report to Marcos Santana, president, Telemundo Global Studios, and will be responsible for leading the new venture created to produce original premium scripted content exclusively designed to fulfill the growing needs of direct-to-consumer platforms. In addition to developing and producing its own IP, the new studio will offer production services to direct-to-consumer platforms in search of high-quality production expertise and capabilities. Ponce will continue to oversee production operations, production design and Telemundo’s Underground Producciones in Argentina.

“Juan is a seasoned executive with the perfect experience and track record to lead this new studio and help Telemundo Global Studios continue to pioneer this highly competitive industry,” Santana said. “His business acumen and creative expertise will be instrumental in helping us launch Telemundo Streaming Studios to fulfil the growing demand for streaming content among Latinos in the US and across international markets.”

Most recently, Ponce was SVP of production operations and strategy for Telemundo Global Studios, where he was responsible for strategic planning, business and production operations, financial strategies, administration, and investments. In addition, he oversaw the Future Development and Casting and Talent Management teams. In this role, Ponce helped with the creation and expansion of premium, short-form mini-series produced in over eight countries for all media platforms. Prior to that, Ponce was VP of finance and corporate strategy for NBCUniversal Telemundo Enterprises.

Prior to joining NBCUniversal Telemundo Enterprises in 2016, Ponce was CEO and founder of New Generation Media, a Hispanic media startup focused on content production and distribution.  Previously, he spent nearly 15 years in the financial services industry where he worked in investment banking advising institutional investors and corporate clients on mergers and acquisitions, capital markets, investments and corporate development.

Ponce earned his Executive MBA from Kellogg School of Management at Northwestern University and B.A. in economics and management with a minor in political science from Albion College.