Back to TVNewsCheck Home Print this page
TVN TECH: OTT

Creating an app to deliver unique content OTT is only a small part of the equation for local news. Stations moving into OTT need their target viewers to be able to find their apps on various platforms, and that can be tricky.
By Jennifer Pallanich | April 18, 2019 | 10:33 a.m. ET. 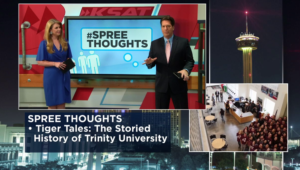 Capitol Broadcasting’s WRAL Raleigh, N.C., was an early adopter of over-the-top (OTT) content, but getting the public to discover it easily was a problem from the outset.

“How do we, the local media, become valuable in that space, be something they want on that platform?” asks Shelly Leslie, GM of audience development at Capitol Broadcasting. “There’s not a lack of content, there’s a lack of ease of finding that content.”

Creating an app to deliver unique content OTT is only a small part of the equation for local news. WRAL and other news organizations moving into OTT need their target viewers to be able to find their apps on various platforms.

There are a host of methods news organizations looking to “get found” can employ. They include on-air promotion; contests and giveaways; advertising on third-party networks; featuring original content available only via OTT; properly naming apps; and paying for visibility on OTT platforms.

Some platforms like Roku don’t allow keywords, which many viewers expect to be able to use, much like with a Google search. If a viewer doesn’t know the app’s specific name, it may be unfindable, and paying to be featured on a platform may not make financial sense for a local broadcaster.

Searching for apps by name within some platform interfaces, such as with the Amazon Fire TV Stick, is clunky, as it requires spelling out an app’s name letter by letter using a remote control, arrow keys and a plot of letters on the screen. Finally, so many apps are available that it can be difficult for viewers to find what they’re looking for.

One of the most useful ways to promote OTT apps is marketing them through their legacy broadcasts, which is one of the methods WRAL uses.

Gone are the days when all content was in one location — on the television — and people were willing to pay $250 per month for hundreds of cable channels they didn’t watch, Leslie observes. Now, she says, viewers are piecing together a patchwork of streaming apps to get the content they want to watch.

“I follow the mantra of ‘fish where the fish are’,” Leslie says. “I know where my local audience is, and where our loyal viewers are. We have big bullhorns called television stations” and can tell people how and where to find the app as well as what kind of content is available via the app. The website is also crucial for promotions, she adds.

WRAL is “strategic about how we promote what content we have on the app,” she says.

One way to increase viewer awareness of an organization’s apps is combining legacy promotion with a contest or giveaway, says Susan Bell, senior product manager at TownNews. Contestants might be required to download the app to be eligible to win the prize, which might be an Apple TV or an Amazon Fire TV Stick, she says.

“We’ve seen huge number increases from those who did marketing promotions versus those who didn’t,” Bell says.

Paid advertising campaigns is another method that news organizations can use.

Catherine Badalamente, Graham Television’s VP of digital media, says Graham stations have had success with paid marketing campaigns with video ads on third-party networks and platforms like Roku to drive up awareness and downloads of OTT apps. KSAT San Antonio, Texas, she says, is seeking a “lofty” five-fold increase of daily unique users this year. The station has had a lot of organic growth and is seeing increasing numbers each month, even though it is running the campaigns on and off, she says.

“All that is happening from people seeking us out,” Badalamente says.

KSAT has been a leader in experimenting with OTT programming, focusing particularly on local and unique programming, she says. “It feels almost like back to the old days of television, and that’s where we think the value lies,” Badalamente says.

Offering unique content through streaming apps, rather than “regurgitating” what goes out over the air, is one way to incentivize downloads of the app, says TownNews’ Bell. The “common sense” approach of doing what a station does well applies to OTT content as well, she says.

In January, KSAT kicked off a digital/OTT-only newscast at 9 p.m., Badalamente says. “We’re getting excited about digital-only programming,” she adds. “San Antonio is really the market that is all in on OTT and testing new ideas.”

OTT is still in its early days, and much of what’s going into programming is experimental. The goal for the year, Badalamente says, is to get the programming “to a better place” with a primary focus on livestreaming.

An appropriate name for a channel can be the difference between being findable and not. Keywords work differently or may not even be available on some OTT platforms, for example, and some viewers may recognize call letters while others will not. Bell points to WDRB Fox41 Louisville, which is the name of the station’s streaming app. It hits on the keywords a viewer is likely to seek, she says.

Because discovery is so difficult and advertising through OTT platforms can be so costly, Katie Larson, VP of brand strategy and innovation at Magid, says broadcasters gain the most by leveraging the platform they already have to point viewers to the OTT app. WSB, Cox Media’s ABC affililiate in Atlanta, did an hour-long digital-only special each night about the Super Bowl and used television and social media coverage to point viewers to those shows on connected TV, Larson says.

“Stations that develop strategy around big events in their markets are seeing their numbers double month over month, just from the marketing,” Larson says. “Awareness of local media is incredibly low, and when consumers find out that it’s there, they seek it out, they get excited. We see the numbers grow significantly month over month because of that new discovery.”

In the past, Larson says, a number of local television stations were delivering content on OTT, but without really marketing it. Last year, she says, that approach shifted and local stations more focused on marketing their OTT content.

“No one has a solution for local news discovery,” says Joel Fineman, director of publisher development for Premion, a Tegna company. “They’ll never be in the top three spots. They don’t have the bang of a national news network.”

“Local news content is not terribly relevant to the OTT world because it hasn’t been there,” he adds.

Roku has, “I think, the best promotional tools for app discoverability” with its pay-to-play ecosystem, but it may not be practical for a station that doesn’t have an OTT marketing budget, he says.

And according to an Amazon spokesman, news organizations can’t pay to have their apps become “featured apps,” since those apps are prioritized based on relevance to wider audiences.

On the other hand, Amazon offers a section devoted to “Popular Apps in Your Area,” and when tied to a local category, a local news app could be targeted for higher visibility in a certain region, the spokesman said.

While Roku and its competitors want to ensure a great user experience, many of them now also generate their own original content. “They have their own content priority,” Fineman says.

“It’s a tough thing to say,” he says, but he believes discoverability will only become more difficult in the coming years.

News organizations are “no different than any other niche service where they’re trying to spend dollars wisely to get in front of consumers with a very clear message,” says Dan Rayburn, who runs StreamingMediaBlog.com. Success comes with targeted marketing and focusing on who they’re looking to reach, he says. As an example, he cites Acorn TV, a premium OTT service with a catalog chock full of British content. “If you’re into that content, it’s the best OTT service out there because it’s super focused.”

By the same principle, apps with focused local content could appeal to viewers seeking local programming.

Rayburn notes there will be an upper limit to the number of apps a consumer is willing to subscribe to. A consumer having to “use six to 10 different apps to get different content with different business models” might find it overwhelming, while the sheer amount of choice can be confusing, he says. Further muddying the water is the fact that average consumers don’t understand licensing deals and so may be upset that content they want isn’t available on a specific platform, he adds.

And the number of apps available is only going to go up. “I expect 15 to 20 new OTT services in the next year,” he says.

In the end, though, Leslie believes discoverability will come down to experimentation.

“We’re in a very, very changing time and what it looks like today is not what it’s going to look like four or five years from now,” Leslie says. “The question is what does the audience want. Some of what they’re telling us is they’ll pay for content they want. The question is: will they pay for local content on that platform?”