KMTV’s Maya Saenz: Covering an Omaha protest that fell into chaos, I realized my hard-won relationships with law enforcement counted for little in a heated moment. More worrisome still, the media’s rights can be trampled by violent caprice.
By Maya Saenz as told to Michael Depp | June 23, 2020 | 5:30 a.m. ET. 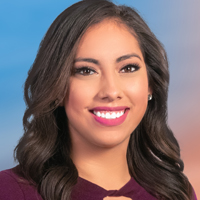 I typically anchor the morning show at KMTV Omaha, Neb. With an upcoming trip to Colorado planned to visit my sisters — one pregnant and the other with a newborn — I had been keeping back from field coverage of the protests to minimize my risk to them.

That changed just over two weeks ago when the Douglas County Attorney announced he wouldn’t be pursuing charges against a white bar owner who had killed a Black man, deciding that the shooting had been in self-defense. Omaha braced for the protests to intensify in response. The city implemented a curfew from 8 p.m. to 6 a.m. excluding law enforcement, emergency personnel, media and anyone going to and from work.

Businesses were told to shut down at noon that Monday of the announcement. I went to the courthouse to cover it, and then to the streets to do some social media coverage of its aftermath. I ran into several friends from law enforcement, who told me everything had been pretty peaceful so far.

As the day progressed, about 600 marchers were out, chanting, but nothing disrespectful to the police. Around 7 p.m., there was even a point where the protesters were on their knees, encouraging police officers to join them, and at one point they did. There were great moments of people hugging, cheering and clapping. 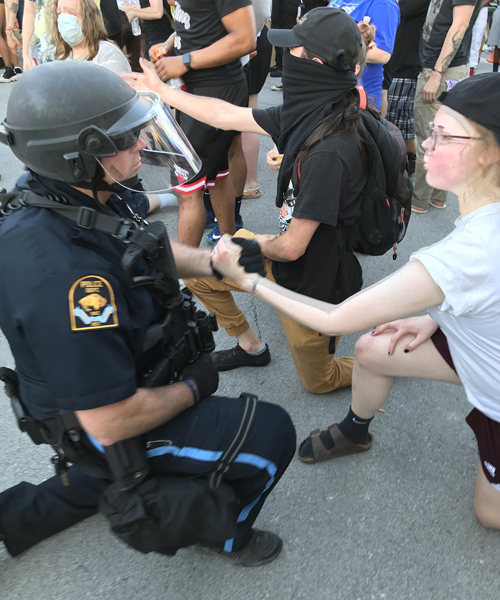 At 8, I saw a friend who is a deputy chief and asked if they were really going to implement the curfew. If they are peaceful, we will let them stay a little bit, he told me, saying the police would tell them to go home, but not get up in their faces too much about it. The police made the announcement to leave, though some stayed, and at around 8:15 someone started throwing water bottles at law enforcement officers.

This is exactly why we can’t let you guys go past this, one police officer said.

That’s when things started changing fast. I was still posting when a cop grabbed one of my reporter colleagues, who was also filming. He dropped his phone and protested he was media, but they grabbed him, knocked him down and pulled him about a block away with the protesters they had started to round up. Some minutes later, they acknowledged he was a reporter and released him.

Protesters who had initially left the area were coming back. Thinking of my family and coronavirus danger, I decided it was time to start getting out of there myself. A colleague and I started heading south to my car when out of nowhere a loud commotion erupted. Dozens of officers were moving toward the protesters. I pulled out my phone and started recording again.

Suddenly, a National Guardsman came toward us and pushed us both against a nearby fence. He grabbed at me and then pulled at my colleague, trying to get his arms back into a zip tie. My media badge was torn off in the commotion so again, we both yelled that we were media, and the Guardsman took several long moments to finally accept that. Get out of here, he yelled, and soon he was joined by other authorities barking at us to do the same.

Along the same fence, Guardsmen and police had lined up dozens of other protesters in zip ties. My body was pulsing with adrenaline and emotion as my phone buzzed with an Instant Message from my boss, asking me to start a Facebook Live as we had no cameras on the ground there.

I rejoined a scrum of media on the northwest corner of the intersection and began my Facebook Live, explaining to viewers about the arrests. I didn’t get too far into it when a new group of police officers approached us all, telling us we had to leave. They even apprehended one of us, a freelance radio reporter in a bright media vest. It took a colleague’s Instagram post of her being detained to get her eventually released.

We can’t protect you if you are here, one officer told the group of us, so that is why I need you to leave.

We don’t need protection, we told him. We just need to be here to cover it.

We don’t care, said the officer. You have to leave downtown.

A colleague and I started walking away to my car, incredulous. Two young, African American women were walking home ahead of us. Out of nowhere, an unmarked Suburban swung in front of all of us and six men in vests and rifles jumped out.

“Get on the floor! Get on the floor!,” they shouted at us. I pulled out my phone to record what was happening, but accidentally double tapped and missed the first part of the exchange. For the third time that night, we yelled back that we were media, but I didn’t want to risk being shot by reaching into my pocket for the ID that had been torn off earlier.

Finally, one of the men recognized my station’s logo on my shirt and let us go. The two young Black women were still on the ground, their arms now in zip ties behind their backs.

We are just trying to get home, they pleaded.

It’s 8:30, one of the authorities answered. You should have been home by now. You are going to be arrested because you broke curfew.

I lingered. These were six officers surrounding two Black women. I just wanted to make sure they were OK.

But the officers kept telling us we had to leave. When there are all these guns pointed at you, you just kind of do what you are told. I was shaken and scared.

I moved to Omaha four years ago knowing no one. I’ve done a lot since that time to get deeply involved in the community, especially the Hispanic community, as I am Mexican.

When I started as a breaking news reporter at the station, I was at almost every crime scene, shooting, stabbing and crash. I got to know a lot of law enforcement people there. I met more of them through my weekly attendance at Omaha 360, a Wednesday gathering of police and community members — politicians, nonprofit workers, some media like me.

But I made the closest friendships with police when I signed up as a coach with the Police Athletics for Community Engagement (PACE) program. The idea was to build a relationship between inner-city kids and police, so they started doing free sports throughout the summer. One of my assistant coaches was a Nebraska state trooper. I’d see police friends there every week, coaching the other teams, selling concessions, sometimes just cheering us on.

Driving home that night through one police barricade after another, I thought about how that day started with protesters taking selfies with police officers, National Guardsmen passing out bottles of Gatorade. I remembered one young white woman who I’d photographed with an officer, both kneeling and holding hands. Later that night I saw her again, tackled and arrested, her arms zip tied behind her. I thought of how excited and happy she’d been earlier that night and how scared and miserable she looked then. 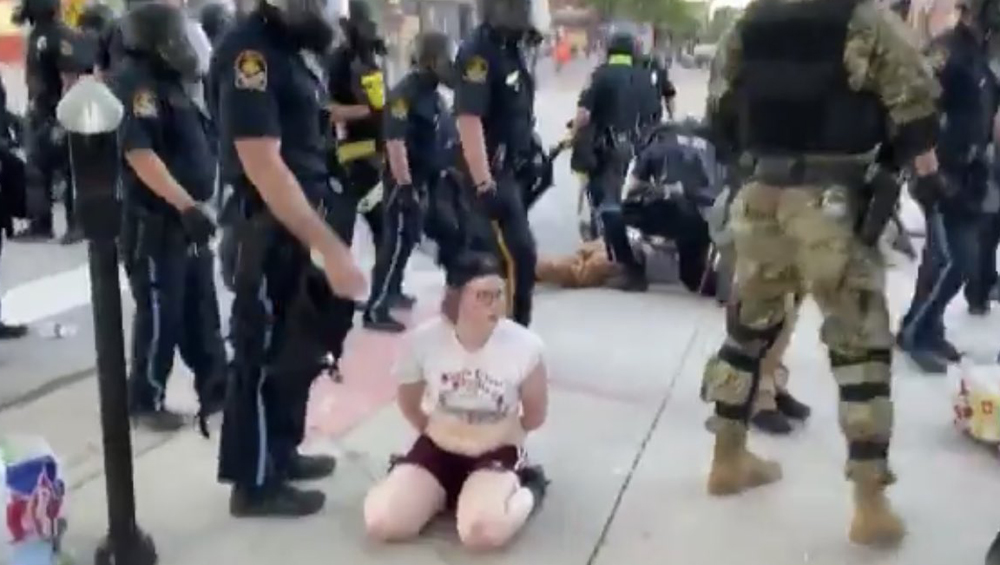 Once everything went to chaos that night, I kept looking for a familiar face that I knew among the authorities. But only unfamiliar faces in military or police uniforms met my eye. I had never felt so unsafe being surrounded by so much law enforcement.

That left me with a profound sadness. I know there are some great cops, and I work with them daily. And I also realize this is what other people feel like when dealing with law enforcement. In those moments when police and Guardsmen pushed us around so freely and commanded us to leave a place where we had every right to be, I couldn’t find those I knew. We were all at the dangerous mercy of anonymous people with guns.

I thought once more of the two handcuffed women we’d left behind on the ground. I could only imagine what might happen there after we left and after every time the media and the cameras leave and it’s the officers and the detained, no one there to bear witness.

That night, for the first time, I realized the power of law enforcement. And it made me shudder.