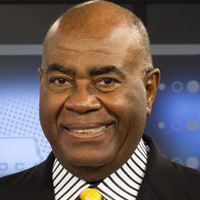 Gary Wordlaw, VP of news and programming at the soon-to-launch Black News Channel cable network, will discuss the new venture in the keynote interview at NewsTECHForum on Dec. 17 at the New York Hilton.

Black News Channel, which launches Nov. 15 in 33 million U.S. cable homes, is a 24/7, ad-supported cable news network aimed at African-American viewers. Wordlaw will explore its strategies for news content and audience development in an interview with Harry Jessell, TVNewsCheck’s co-founder and editor.

Wordlaw is an eight-time Emmy winner and 50-year veteran in the broadcast industry who has managed TV stations and newsrooms across a range of small and large markets. He previously worked as news director at Washington’s WJLA and most recently headed Nexstar’s NBC-Fox duopoly in Baton Rouge, La.

“Black News Channel is a long incubating and major undertaking with a $26 million production and operations center behind it,” Jessell said. “Gary is an industry veteran who know the network faces both headwinds and compelling prospects as it looks for an audience, especially with the 2020 election in the backdrop.”

Panels and presentations will tackle technology and the 2020 election coverage; cybersecurity in the newsroom and the field; news strategies for OTT and multiplatform production without the pain, among other sessions.

NewsTECHForum is co-located with the 14th Annual SVG Summit, which gathers
over 1,000 sports video professionals and their technology partners to talk about production excellence in sports television. The SVG Summit is produced by the Sports Video Group and features a technology showcase of more than 75 companies that is open to all  NewsTECHForum attendees.