The current WABC New York assistant news director will be responsible for leading the on-air and online news operations for the NBC and Telemundo owned stations in Philadelphia.
By Mark K. Miller | December 8, 2020 | 6:50 a.m. ET. 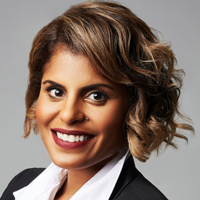 Elizabeth Flores has been named vice president of news for NBC’s WCAU and Telemundo’s WWSI in Philadelphia. In this role, Flores will be responsible for leading the on-air and online news operations for the NBC and Telemundo owned TV stations that serve English and Spanish-speaking viewers in the Greater Philadelphia region.

Flores will report to Ric Harris, the stations’ president and general manager and will start on Jan. 11, 2021. She succeeds Anzio Williams, who was promoted to SVP of diversity, equity and inclusion at NBCUniversal Owned Television Stations.

A bilingual newsroom veteran with more than two decades of experience in both the English and Spanish-language media, Flores comes to Philadelphia from New York where she was assistant news director for WABC since 2018.

Prior to that, Flores spent 17 years at WTVJ-WSCV Miami where she held several news management positions including assistant news director and senior executive producer. She began her broadcast career as an intern at WTVJ.

“I’m so excited to join the NBC10 and Telemundo62 family. It will be a privilege to work with an exceptional team of journalists in both English and Spanish,” Flores said.

Born and raised in Miami, Flores is a first-generation Latina whose parents emigrated from the Dominican Republic and El Salvador. She earned a Bachelor of Arts in mass communication from Lynn University in Boca Raton, Fla., and received a certificate in diversity and inclusion from Cornell University. She is a three-time regional Emmy award winning producer and a member of the National Association of Hispanic Journalists.