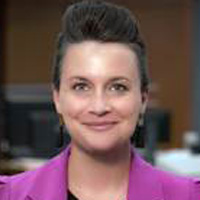 Tegna’s NBC affiliate KING Seattle has appointed Julie Wolfe news director, effective June 21. She will be responsible for overseeing the station’s news content across all platforms.

Wolfe joins KING from WHAS, Tegna’s ABC affiliate in Louisville, Ky., where she’s been news director since 2018. During her tenure, Wolfe oversaw the relaunches of Wake Up, NightTeam, The Big 4 and the Focus investigative team. Under her leadership, the WHAS team has received multiple regional Emmys, regional Edward R. Murrow Awards, Associated Press awards, and took home the Kentucky Press Photographers Association Award.

“Julie is a consummate news leader,” said Steve Carter, acting president and general manager of KING. “She has an established track record of building newsrooms that embrace change, take smart risks and meet audiences wherever they seek news content. Her depth of experience, focus on innovative storytelling and leadership will help our award-winning team at KING 5 continue to tell important stories, reach new audiences and make a difference in Seattle.”

Prior to WHAS, Wolfe spent more than a decade at WXIA, Tegna’s NBC affiliate in Atlanta, most recently as assistant news director, where she helped develop and launch the station’s social-first show, Morning Rush and found a new audience for The Late Feed, WXIA’s 11 p.m. newscast. Wolfe first joined WXIA in 2006 as a multimedia journalist. She also served as manager for social media engagement and, before becoming assistant news director, served as director of digital content. In that role, she helped with the station’s content transformation, overhauling the newsroom’s workflow and creating a strategic, digital-first operation that served audiences 24/7.

Prior to joining WXIA, Wolfe was a multimedia journalist at WGRZ, Tegna’s station in Buffalo, N.Y. She got her start in television as a reporter in Cheyenne, Wyo. Wolfe holds a Bachelor of Journalism degree from the University of Georgia’s Grady College of Journalism.

Wolfe was elected to the RTDNA board as Region 8 chair in 2019, and she currently serves as the education committee chair. She is also on the alumni board for The Carole Kneeland Project for Responsible Journalism.