KSHB’s Dia Wall: “Stereotypical camps are being broken down. This is a different energy. It’s not just Black people. This is really a melting pot.” And her colleague Kevin Holmes adds: The crowds were “the most diverse I’ve seen in my entire career.” Above, Kevin Holmes reported on the protest as the imposed curfew time for Kansas City drew near, and large crowds remained on site.
By Jennifer Pallanich | July 7, 2020 | 5:30 a.m. ET.

Black Lives Matter protests in the aftermath of the George Floyd killing have a different energy than other protests that KSHB’s Kevin Holmes and Dia Wall have covered over the years.

Holmes and Wall, who report and anchor for the Scripps NBC affiliate in Kansas City, Mo. (DMA 32), said there is fear on part of both people of color and law enforcement.

Black people are worried that their husbands, sons, uncles or grandfathers “aren’t going to come home if they get pulled over for the smallest infraction,” Wall said.

Parents have told Holmes they are “afraid my child is going to become another hashtag.”

People in the Black and Brown communities want to feel safe and that interactions with police officers “will go in a just manner,” Holmes said. “What they saw with George Floyd, it didn’t seem like that.”

At the same time, family members of police officers worry about their loved ones being killed while on the job.

“Somewhere, somehow those messages are not necessarily being communicated,” Wall said.

As Holmes covered the protests, he could see tensions rise with the approach of evening. Police officers who had arrived in regular uniforms donned heavier gear, and it became apparent the use of canisters of tear gas and non-lethal projectiles was more probable.

“It was tense and alarming,” Holmes recalled.

“I got hit in the back of a head with one,” Holmes said, but doesn’t think he was the target.

When tear gas was deployed, Holmes and his photographer were about 100 yards away, and they were live. The tear gas “traveled fast” and wind was a factor.

“It hit the photographer first. I had to toss back to the anchor,” he said. “I never thought I would fall victim to tear gas. I thought I was far enough away.” 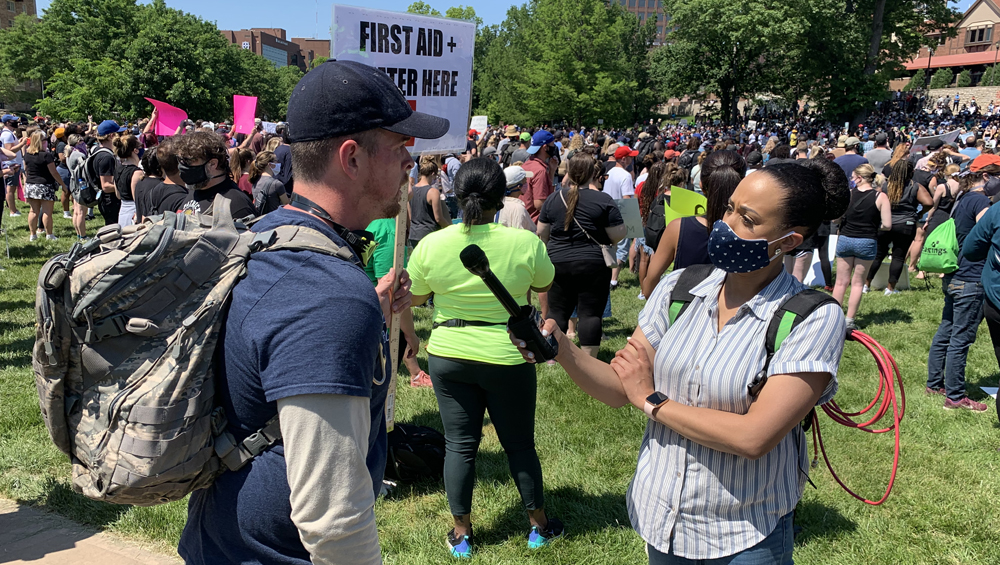 KSHB’s Dia Wall interviewing a veteran, who was rolling around a mobile first aid and water station during the May 31 protest.

In later protests, however, the police adopted a different strategy. At first, they had formed tight lines surrounding the park where the protesters gathered and kept the crowd tightly contained through the use of citations, riot gear, tear gas and non-lethal projectiles, Wall said.

With the tight police lines, Holmes said, protesters felt cornered and “attacked with no way to defend themselves.”

Later, the police “rolled back some of their use of the gas, flash bangs” and loosened the lines around the protestors, Wall said. The result was “a lot less shouting and throwing of bottles and rocks and stuff.”

As police officers strove to ease tensions during the protests, Holmes said he saw that some of the officers had “gained the trust of the protestors and vice versa.” In short, Wall said, de-escalation made things safer for the police and the protestors.

When the police began practicing de-escalation, it “quelled the protesting more swiftly than we’ve seen in other cities,” Wall said.

Black participants at the recent BLM protests, which lasted about three weeks in Kansas City, were joined by other races and by people of all ages.

The crowds were “the most diverse I’ve seen in my entire career,” Holmes said.

Wall added, “Stereotypical camps are being broken down. This is a different energy. It’s not just Black people. This is really a melting pot.”

Veterans set up first aid stations and passed out water to protestors, she said, and parents brought their children.

“I asked why they would bring their kids, and they said, ‘I feel like they need to be here at this moment of history,’ ” Wall said.

To Wall, the protests aren’t just about George Floyd, but the history of “every microaggression” endured. “It’s not just one instance. It’s the collective impact that Black America has endured,” Wall said. “How many times this has played out, and they don’t feel like justice has been served.”

The protests highlight “the complicated relationship the country has to race, racism and discrimination,” Wall said.

She heard one angry white male in his early 20s say that things should change, but to give it time.

To which “a Black woman to my left said, ‘It’s been 400 years. How much longer are we supposed to wait?’ I’ve never been in a protest where I saw a deep ideological conflict about how we move forward as a country,” Wall said.

i noticed the same phenomenon in May after George Floyd was killed. Most of the protesters were young people in their 20s and 30s. They were mixed race, sometimes majority white. There is a sea change in mind taking place in America. You did not see groups like that 50 years ago. The young people of today are replacing us older folks who will die or have died. Perhaps they understand something we did not — may be mentally but not emotionally. All I can say is better late than never. It’s about time.