Back to TVNewsCheck Home Print this page
DMA 89: WACO-TEMPLE-BRYAN, TX 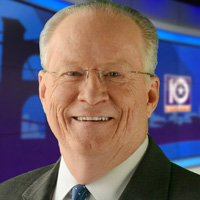 In the coming weeks KWTX will celebrate Garrett’s legacy in the broadcast industry in nightly newscasts and with appearances in communities throughout Central Texas.

“We want viewers to have the opportunity to personally congratulate Rusty as we honor his remarkable career and a legacy of protecting the lives of Central Texans that will continue long past his final nightly weathercast on June 28,” said KWTX News Director Bob Walters.

Garrett has been the chief forecaster at KWTX News 10 since 1989 and according to the station is credited with overseeing the creation of the region’s most advanced forecast center, helping to assemble the station’s team of meteorologists and rolling out the Weather Edge, a state-of-art mobile forecasting unit,

He’s just the fourth chief forecaster — and the longest serving one — in the station’s 64-year history.

“I just feel it’s the right time. I’m incredibly grateful and humbled to have been a part of so many families’ daily lives. I’ve had a great journey and it is hard to believe I have spent half of my life at Channel 10. It’s hard to wrap my head around all of the changes I’ve seen in technology over the years,” Garrett said.

Garrett, a native Texan, started his broadcast career as a radio announcer while still in high school in his hometown of Victoria.

He spent a decade working for radio stations from Victoria to Corpus Christi before making the jump to television, heading TV weather departments in Longview-Tyler and Lufkin-Nacogdoches before moving to KWTX in central Texas to succeed longtime forecaster Roy Cook.

He arrived at the start of a wave of change in forecasting technology, as the National Weather Service’s Next Generation Weather Radar or NEXRAD went online and the station purchased what at the time was the largest commercially available Doppler radar to ensure complete regional coverage.

“Through many late nights and early mornings, Rusty has been the voice of calm in the storm whenever severe weather threatened Central Texas,” said KWTX managing editor and long-time coworker Rick Bradfield.

Garrett has also been a strong advocate for preparation before the storm, spearheading the KWTX school weather safety program Project Tornado and talking to students in schools across 16 Central Texas counties about what to do when severe weather threatens.

“Thousands grew up watching Rusty and learning important lessons from his Project Tornado curriculum, today those folks now have children of their own who are getting that same education from him,” said KWTX VP-GM Josh Young. “No one has singlehandedly championed weather safety more than Rusty,” Young added. Garrett’s involvement in the community doesn’t stop with advocating weather safety.

He has served on the boards of directors of the United Way and the American Red Cross and every year  was the local chairman of the U.S. Marine Corps’ Toys for Tots Christmas campaign.

“There’s no question that one of the things Rusty is most passionate about is the annual Toys for Tots campaign. As the public face of the annual toy drive he has helped ensure there were gifts under the tree on Christmas morning every year for tens of thousands of children throughout Central Texas,” Bradfield said.

On May 2 Garrett was honored with “The Others Award,” the Salvation Army’s highest honor given to individuals who selflessly support the mission of the organization.

“His love and commitment to the community and especially its children are obvious to anyone who watches News 10,” said KWTX anchor and longtime friend Julie Hays.

Garrett says he plans to continue the community service and to support the station projects with which he has become synonymous over the past three decades.

“Food For Families is the largest one-day food drive in Texas and I plan to continue to be a part of the live broadcasts for many years to come. And, my commitment to working with the U.S. Marine Corps to ensure no child goes without a present under the Christmas tree through the station’s annual toy drive will continue long past my last forecast,” Garrett said.

Garrett has agreed to return to the KWTX Weather Center to substitute when other KWTX meteorologists are away, but he says he’s looking forward to not wearing a suit every day.