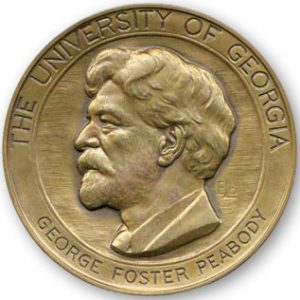 Peabody has added five new members to its board of directors, a group of prominent entertainment and media industry leaders providing support for the program’s current and future initiatives. Launched in 2015, the board of directors are separate from the traditional board of jurors that each year evaluates entries and bestows the prestigious Peabody Awards for excellence in broadcasting and digital media. Peabody is based at the University of Georgia’s Grady College of Journalism and Mass Communication.

“Each of these leaders brings invaluable experience and insights to the board’s effort to bolster Peabody’s presence and programming initiatives within the Hollywood creative community,” said Jeffrey Jones, executive director. “We welcome their participation, and appreciate the board’s guidance and leadership in promoting engagement with and conversation around transformative media programming throughout the year.”

New board members are (in alphabetical order):

Susanne Daniels, global head of original content at YouTube, is an award-winning executive who has developed and produced some of the most iconic and groundbreaking series in entertainment. In her current position, she leads the company’s overall efforts and investments in original content, including programming strategy, development, and production of series and feature films from some of YouTube’s most successful creators. Previously, Daniels was president of programming at MTV as well as holding top posts as president of Lifetime Television and The WB, vice president of comedy for Fox Television and more. In these roles she led the development for some of the most memorable shows on TV, including Buffy the Vampire Slayer, Dawson’s Creek, Gilmore Girls, Army Wives, Charmed, 7th Heaven, Smallville, Project Runway, Martin, Living Single, and most recently Are You The One and Scream.

Peter Roth, president and chief content officer for Warner Bros. Television Group, has creative responsibility for all of Warner Bros.’ television production activities worldwide. In this capacity, Roth serves as president of Warner Bros. Television, one of the entertainment industry’s most respected providers of original content, producing award-winning drama and comedy series for broadcast network television, cable and on-demand/subscription platforms. Roth’s acumen for developing and producing successful programming has brought Warner Bros. the distinction of being the most prolific studio in Hollywood during his tenure. As of February 2019, the divisions of the Warner Bros. Television Group combined are producing more than 110 programs for the U.S. broadcast networks as well as cable and subscription/on-demand platforms for the 2018–19 television season.

Jennifer Salke, head of Amazon Studios, oversees of all aspects of television and film development as well as production for Amazon’s entertainment division. This includes implementing an overall long-term content strategy for both units, along with overseeing the short-term goals of launching upcoming series and films and ongoing support of current series. Upon her joining the Amazon team, the studio signed the ReFRame agreement—supporting a formal action plan to further gender parity in the media industry. Prior to Amazon, Salke was president of NBC Entertainment, a title she had held since July 2011. Salke was responsible for comedy development, drama development, current programming, casting and diversity programming initiatives, as well as the entirety of Universal Television operations, which includes parallel divisions of development, programming and casting. Salke served as executive vice president of Creative Affairs at Twentieth Century Fox Television. In 2002, Salke joined Twentieth Century Fox as senior vice president of Drama Development. She began her career at Aaron Spelling Productions.

Michael Schwimmer is president and CEO of Fuse Media, an independently owned media company serving the Latino and multicultural youth audience. Reaching audiences via Fuse and FM channels, Fuse.TV, Fuse TV mobile websites and apps, a podcast network, several branded social media channels, and live events, Schwimmer is spearheading the transformation of Fuse into a multiplatform media brand. As president and CEO, he brings not only great passion for this audience to his role, but also significant industry expertise. Schwimmer has been a committed advocate for delivering relevant and entertaining content to Latino and multicultural viewers for most of his career. His work has been celebrated with several industry awards, including the T. Howard Foundation’s Diversity Award for Executive Leadership in 2015, and the Multicultural TV Leadership Award from Broadcasting & Cable and Multichannel News in 2014.

Paul Telegdy, co-chairman of NBC Entertainment, is jointly responsible for overseeing all aspects of primetime, late-night and scripted daytime programming for the network, including business affairs, marketing, communications, scheduling, West Coast research and digital operations, as well as first-run syndication. Prior to being named co-chairman in September 2018, Telegdy most recently was president, Alternative and Reality Group, NBC Entertainment, providing leadership in a role created specifically for him in June 2016. That year, Telegdy launched Universal Television Alternative, quickly building a world-class studio focused on unscripted series.

Their fellow board members include (in alphabetical order after chair):