Brandon Richard: “As an anchor/reporter at WMC-TV Memphis, I found myself trapped in narrow downtown streets between police and a lingering, angry group of protestors. With no camera or station-branded microphone in hand, I was an African-American man vulnerable to police interpretation.”
By Brandon Richard | June 19, 2020 | 5:30 a.m. ET.

“You’re going to bomb your own citizens?” a male protester screamed at the police. “Pigs!”

Until this moment, just about every protest in Memphis against racial inequality in the wake of George Floyd’s death had remained largely peaceful. They have been so peaceful that some started to compare them to church revivals or pep rallies, complete with groups of people singing and dancing in the streets.

But this night was different.

Because of the risk of contracting COVID-19, and because I didn’t want to get trampled, I tried my best to always stay on the outer edge of the crowd of protesters I had been following for the last few days. Now, I suddenly found myself running from the tear gas along with those protesters.

The protesters had been trying to make their way toward the I-40 bridge in downtown Memphis when the Tennessee Highway Patrol launched canisters of tear gas on the crowd. THP later said they launched the tear gas to protect the public, troopers and the bridge, and they did so only after giving several warnings to protesters.

“Was it a good idea to come down here?” I asked myself as I ran behind a small tree. The tree provided some temporary cover from the crowd now running toward me and away from the tear gas. 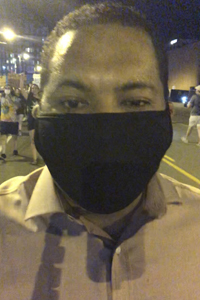 I wasn’t technically on the clock. My shift had ended several hours before. But I knew these protests were historic, and I wanted to cover them. So, after working my regular dayside shift at WMC-TV, reporting on the coronavirus pandemic, I made my way to downtown to cover the protest. I had only my cellphone and my face mask. This allowed me to blend in with the crowd.

Last year, a Memphis television reporter had been assaulted, knocked to the ground by rioters, while covering the fatal shooting of a Black man by U.S. Marshals. The media could always quickly and easily become a target. I wanted to minimize any chance I had of becoming a victim, so covering the protest on my own time was the best way to go, I thought.

“It’s a trap! It’s a trap!” another protester yelled to the crowd as I emerged from behind the tree.

Police appeared to have the crowd surrounded, boxed in from all sides. Many of the protesters immediately left the area. They had enough excitement for the night, I guess. But about three dozen of them remained, mostly young males, who appeared to be in their late teens. They continued to hurl insults and glass bottles at officers. I noticed most of the media that had been covering the protest for the 10 p.m. news had also left. Just a few print reporters and I remained.

Despite the atmosphere becoming more chaotic, I knew I should stay. I had a duty. I needed to cover whatever was about to transpire between the police and the protesters. I knew any video evidence I could capture on my phone and broadcast through live updates on my Facebook page could be important for either side. And it was important for the public to know what happened. So, I continued my livestream and emailed my newsroom quick updates.

The next hour was like a game of Pac-Man in the streets of downtown Memphis. Police in riot gear cut off protesters at every turn. The goal was to push them out of downtown.

Some of the protesters grew more agitated with police and started banging on storefront windows and tossed over outdoor patio furniture. And then I heard it. The glass shattering. Protesters had broken the window of a local shoe store and the crowd began cheering. I continued streaming, explaining to my Facebook audience, which now included viewers from my station’s main Facebook page, what had just happened.

Another protester, a white man, angrily pointed out that the shoe store was a black-owned business.

Protesters backed off. They didn’t try looting the business. One even picked up a shoe that had fallen and placed it back on the shelf. They continued walking.

Police followed behind in their riot gear. The officers were lined up from one end of the street to the other.

My fellow journalists and I found ourselves trapped between those officers and the protesters. Some of the protesters had become increasingly upset and started hurling insults at the media (they figured out who we all were by this point) and told us to stop recording them. I tried to give them some distance to let them cool off. But I couldn’t. There was nowhere to go on the narrow city streets. I flashed my media badge at police and told them I was with Channel 5, but they didn’t seem to care. They kept yelling at us to move with the protesters.

It was at this moment when I became seriously concerned about my safety. Protesters and officers seemed to be angry. Here I was caught in the middle. No TV camera. No big TV light. No station-branded microphone. Nothing to identify me as a reporter. No way to distinguish myself from the protesters. I was just a Black man wearing a face mask, holding up a phone.

As a journalist, my relationship with the police has been good. I haven’t had any problems. Most officers have been helpful and kind.

But I had a traumatic experience involving police from my childhood.  When I was about 10 or 11 years old, a police officer in my hometown in western Oklahoma accused me of breaking a woman’s window. This was absurd. I was walking with my mother down the street during the time this alleged incident happened. She would have never let me do such a thing. Besides, I was a nerdy kid. My idea for adventure was presenting mock newscasts for my family from the kitchen table. I wasn’t about to break someone’s window.

The officer accepted my mother’s protest that it could not have been me, and the incident passed. But I often think back to that moment because it reminds me of how an innocent person can be mistaken as a suspect or even as a threat to police.

Twenty-five years later, I found myself trapped in the middle of a protest in downtown Memphis. Would police mistake me for a protester? Would they try to arrest me, or worse? Those were the questions I was now facing. That traumatic moment from my childhood filled my mind. I knew the best thing to do was to continue recording on my phone. If anything happened to me, at least the world would see it.

Moments later, my news director called me for an update and told me to be careful. I told him I would.

Thankfully, a short time later, police managed to successfully direct the protesters out of the core of downtown and the atmosphere calmed down considerably. I walked back to my car I parked a few blocks away. I sent my video and pictures back to the station and called it a night.

The next week of protests was peaceful, in large part because the mayor issued a curfew. Memphians continue to demonstrate, not in large numbers like other cities, but with an intensity that shows me something is happening.

I continue to cover the protests. My station has even provided bodyguards for the crews. I also continue to cover them on my own time. I take every safety measure I can. I stay on the outside of the crowd. I wear a mask. I carry goggles to shield me from tear gas, if ever necessary.

I need to be there. I want to witness this history unfolding. I want to be there in case something goes wrong. That’s the role of a journalist, after all.