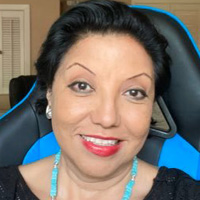 Rebecca Aguilar has became the first Latina national president of the Society of Professional Journalists in its 112-year history. She was sworn in on Sept. 4 by SPJ National President Matthew T. Hall at the President’s Awards Ceremony during the SPJ21 conference.

Aguilar, who is celebrating 40 years as a journalist, is a freelance reporter based in Dallas. Her journey started as a news reporter at a television station in Toledo, Ohio. She also made professional stops at television stations in Chicago; Corpus Cristi, Texas; San Antonio; Phoenix; Los Angeles and Dallas. Along the way, she has been recognized with 50 awards and nominations for her journalism work.

Aguilar joined SPJ in 2009 when the digital media committee asked her to be involved. She has held leadership positions on the digital and diversity committees. She has been chair of the Diversity and Inclusion Committee since 2018. Under her leadership, the Dori Maynard Diversity Leadership Program was revamped and strengthened. Aguilar also served on the board of the SPJ Fort Worth Pro chapter from 2011-2018, where she helped bring diversity to the chapter.

In 2012, Aguilar was instrumental in helping to bring the National Association of Hispanic Journalists to join SPJ and Radio Television Digital News Association at the Excellence of Journalism conference. The collaboration lasted several years. She also sat on NAHJ’s board for four years as its vice president.

Aguilar’s goals for the Society are to focus on strengthening existing professional and student chapters and putting attention on SPJ communities. She will also encourage the growth of more chapters set in motion by past SPJ presidents, she said.

“Our SPJ chapters are the backbone of our organization. They are the boots on the ground in communities around the country,” Aguilar said. “Local journalists, professors and student journalists turn to chapters for support during challenging times. We want the chapters to thrive and survive. Chapters feed into communities, and communities feed into chapters. The collaboration is a win-win for SPJ.”

Continuing to bring new diverse voices to SPJ is important to Aguilar. “I want everyone to know that SPJ is for ALL journalists, professors and student journalists. And that everyone’s differences and experiences should be shared to make us a better organization,” she said.

Aguilar is the daughter of immigrants from Mexico. She grew up in Ohio and Mexico City. She earned her bachelor’s degree in communications at Bowling Green State University and received her master’s degree in journalism at the University of North Texas.