The station group moves him up from digital director and editorial director at WTMJ, Scripps’ NBC affiliate in Milwaukee, to work with newsroom leaders in nine of Scripps’ local TV markets to implement, evaluate, measure and refine the company's local content strategy.
By Mark K. Miller | November 22, 2019 | 12:23 p.m. ET. 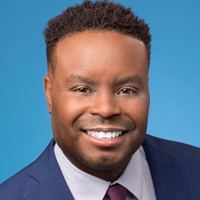 The E.W. Scripps Co. has named Marcus Riley to serve as senior director of content strategy for its East Coast television stations.

“Marcus has been a stand-out newsroom leader in Milwaukee — bringing new ideas to the table and helping push our reporting to a high level of service for that community,” said Sean McLaughlin, VP of news for Scripps’ Local Media division. “Now he brings his journalism expertise to a larger group of stations.”

Riley is one of four Scripps directors of content strategy, who work with a group of Scripps stations to maintain high-quality local coverage that improves the lives of those they serve.

A native of Toronto, Riley earned a bachelor’s degree in broadcast journalism from West Virginia University.