Back to TVNewsCheck Home Print this page
DMA 69: OMAHA, NE

The Nebraska Broadcasters Association says the vice president granted exclusive access to his helicopter inspection of flood damage to KPTM Omaha, other Sinclair stations and Fox News rather than making the station’s coverage part of pool coverage. NBA President Jim Timm: “This action significantly handicapped local broadcasters across Nebraska from distributing vital information to the victims of this devastation and to the general public.”
By Harry A. Jessell | April 1, 2019 | 12:13 a.m. ET. 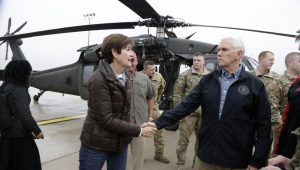 The Nebraska Broadcasters Association is protesting the “exclusive access” that Sinclair’s KPTM Omaha, Neb., had to Vice President Mike Pence when he visited Nebraska on March 19 to survey the flooding there.

In a letter sent to Pence’s office Friday, NBA President Jim Timm says that Pence’s advance team notified broadcasters in the state that there would be no room for media on his helicopter.

“However, upon the Vice President’s arrival, local broadcasters learned that one Omaha station [KPTM] has been granted exclusive access to the helicopter tour,” the letter says.

“Further, the photographer granted a seat on the flight said his station’s footage was not to be considered ‘pool video’ and the footage was only to be shared with other Sinclair TV stations and Fox News Channel. Later, a Sinclair executive confirmed the access was granted on those conditions.

“To be frank, this action significantly handicapped local broadcasters across Nebraska from distributing vital information to the victims of this devastation and to the general public.”

Reached by phone Friday evening, Timm said the association’s beef was not with KPTM. After looking into the matter, he said, the association concluded that it was Pence’s office that imposed the exclusivity.

Timm said that he was aware that Sinclair had been accused during 2016 of trading soft coverage of the Trump campaign in exchange for access to Trump officials. However, Timm said he did not want to comment on those charges, which Sinclair has vigorously denied.

Timm’s said he has not heard back from Pence’s office in response to the letter or earlier phone calls and emails.

Last Monday, Dan Shelley of the Radio Television Digital News Association addressed Sinclair’s preferential treatment in Nebraska in his blog and called for greater access to government officials when they visit disaster zones.

“This was a taxpayer-funded official flight by the vice president of the United States and other elected officials to an area ravaged by a natural disaster.

“Therefore, it was the very public affected by the flooding that suffered by not being able to see the damage from the vice president’s vantage point on their preferred local television stations,” Shelley said.

Shelley said he contacted KPTM News Director Jim Turpin. According to Turpin, Shelley said, the station checked with the vice president’s office to see if its helicopter footage was to be designated as “pool” video, and, therefore, to be made available to other news outlets.

The response was no, it was to be “exclusive,” Turpin told Shelley. “Had we been appointed the pool camera we would have ensured everyone got the video.”

“Kudos to KPTM for getting a highly coveted exclusive. Presidents and vice presidents frequently make such arrangements with news organizations,” Shelly said.

“In fact, during my years as a local broadcast journalist, I and my stations’ audiences benefited from a number of such arrangements. However, in this case, there was an overwhelming need for as many people as possible to see what the vice president saw from above the disaster area.”

We need to dump Trump and Pence in the 2020 Elections, and bring a REAL DEMOCRACY back to the United States of America.