Meteorologists who embrace augmented reality can enhance their storytelling and keep viewers, particularly younger demographics, tuned in, and not just on TV, according to experts who participated in a TVNewsCheck Webinar, The New Weather Storytelling with Augmented Reality. Talent coach and consultant Tim Heller, of HellerWeather, showed a scene he created while working at Disney-owned KTRK Houston, to explain how AR draws viewers into the presentation.
By The Weather Company | November 30, 2020 | 5:00 a.m. ET.

Meteorologist Tim Heller stands behind a knee-high graphic model of the Houston cityscape, describing a weather pattern that often brings precipitation to the metropolis. Cumulus clouds rise before him and, as he glides his hand across the scene, cool air slides underneath them, causing nimbus clouds to form and raindrops to begin falling onto the skyline — an effective visual that brings the city’s weather story to life.

Heller, who worked at Disney’s KTRK Houston before founding his own consulting and talent coaching company, HellerWeather, is a big fan of The Weather Company’s Max Reality product, an AR storytelling tool he believes can help TV meteorologists, and their stations, become the “go-to” source of weather information in their markets.

With augmented reality, “the viewer becomes an active participant,” Heller said. “That really pulls them into the presentation.”

This can keep viewers stay tuned in longer to a forecast, added Mike Convey, offering manager for Max Weather and Traffic at The Weather Company, an IBM Business. He and Heller spoke during a recent TVNewsCheck webinar, The New Weather Storytelling with Augmented Reality, sponsored by The Weather Company.

“We’ve done studies and found that, especially in younger audiences, this technology really resonates, and it can help build your audience,” Convey, said, noting that 55 percent of 25 to 34 year olds said they prefer a weather presentation with AR technology.

“Weather broadcasts had been the same for years and years,” Convey continued. “This brings a whole new flavor to it, and you can really set yourself apart.”

Albert Martinez, chief meteorologist at Univision Network, who also participated in the webinar, showed the audience how he uses AR to explain weather phenomena to his viewers. 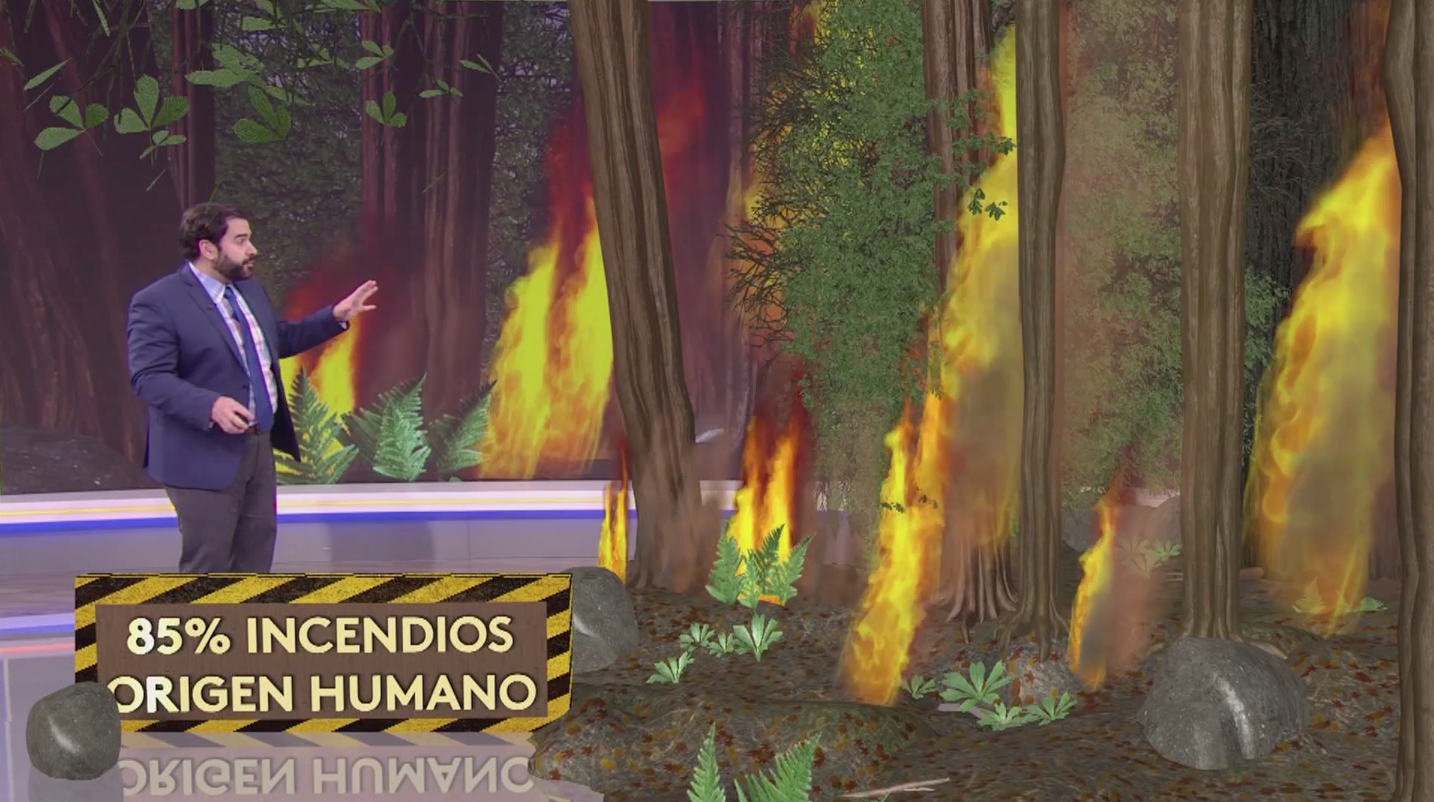 In one scene, he stands in what appears to be a wooded area, while explaining that dry vegetation, low humidity and wind can set the stage for a wildfire. Suddenly, the screen flashes to all white and a crash overwhelms the audio. A tiny fire — sparked by lightning — starts to build in the trees next to Martinez, eventually engulfing the landscape around him.

“You can create compelling AR presentations, with the graphics, the sound effects, and the transitions, to bring a huge news story into the newscast, and also to social media,” Martinez said, noting that while he presents on-air in Spanish, it’s easy for non-Spanish speakers to understand what he’s communicating with the AR visuals.

Martinez, who serves as a Max Reality Ambassador for The Weather Company, has been creating and presenting with AR for nearly a decade and offers a good example of what meteorologists can accomplish with the technology. Producers, accustomed to thinking of augmented reality as a tool that requires a team of graphic artists to create, are often surprised to hear that Martinez creates his scenes entirely by himself. 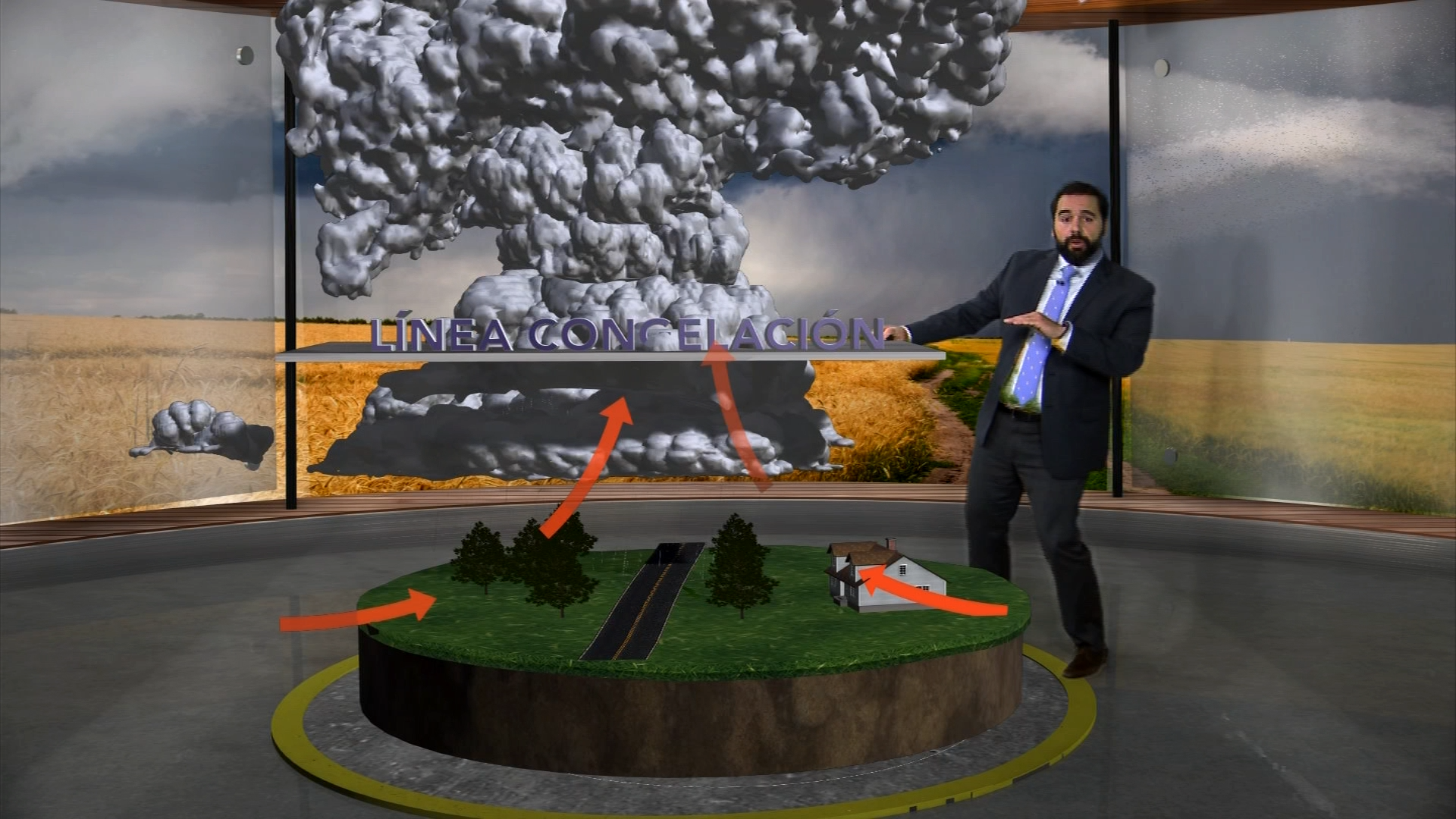 To create a scene, Martinez starts by sketching a storyboard on a notepad. He includes blocking, the objects he wants to use in the segment, background considerations, and where he plans to stand while presenting the scene in the studio or out in the field.

Martinez finds images that form the foundations of his scenes online or within The Weather Community portal provided by The Weather Company. He mixes and matches graphics and the objects, tailoring the presentation to its theme.

From Simple to State of the Art

Martinez often uses a chroma key — a green screen with two sides and a ceiling — and camera tracking to achieve a more realistic look with his scenes. While he presents his scenes live on air, he suggested that meteorologists start out broadcasting recorded scenes until they gain confidence with interacting with the presentation live on air. He also noted that you don’t need a large studio and tracking camera. Fixed cameras can also create a compelling scene. 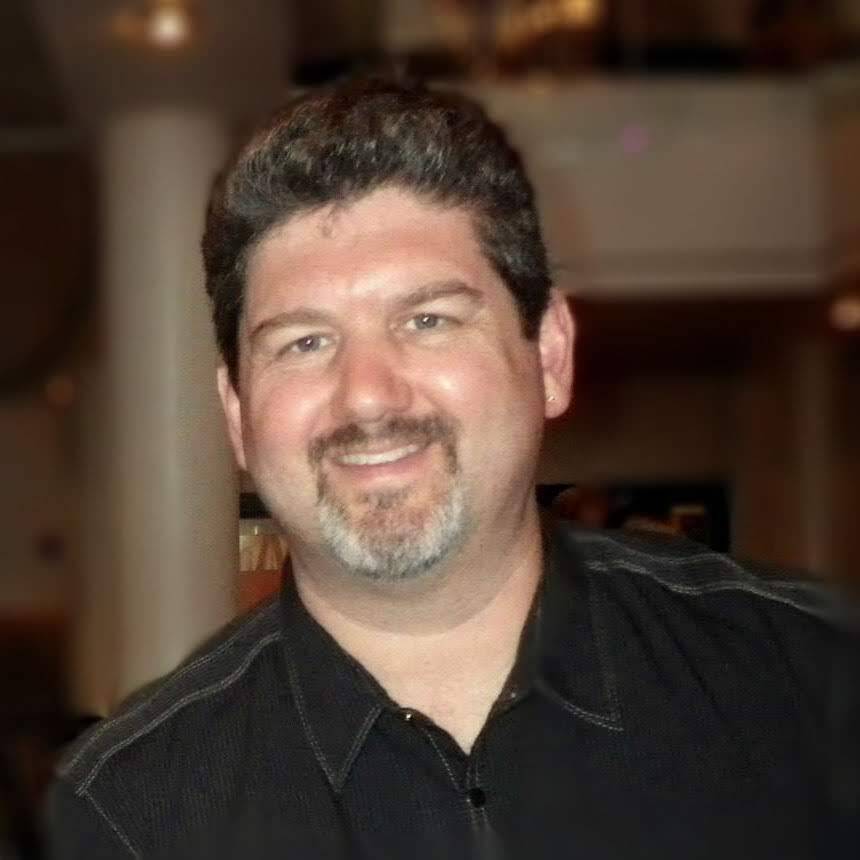 Convey agreed, noting that 60 percent of Max Reality customers use traditional fixed cameras — which every newsroom already has — with objects keyframed in and out of scenes.

“All of these options are good,” Convey said. “Full tracking will give you a little bit more flexibility to be able to move around the objects in a virtual space, but, really, with a fixed camera you can do an awful lot.”

Martinez’s use of the chroma key comes alive in a scene he created to explain to viewers the difference between a Category 1 and a Category 5 hurricane.

Adding Drama by Interacting With Imagery

Dressed in a windbreaker, his hair blowing wildly, he stands in front of a small house in a howling wind and driving rain, while palm trees blow around in the background. As he speaks, the scene shows how damage to the home is still minimal, but as conditions worsen, a window shatters and Martinez, acting in self-defense, throws his arms up. By the time the segment enters Category 5 conditions, Martinez is shouting, a utility pole has crushed a car parked in the driveway and the house has lost its roof.

The segment even includes a virtual aerial shot, looking down at Martinez from above as he braves the extreme weather.

“If you want to bring to the audience the feeling that it’s real, you have to interact” with the virtual objects, Martinez told webinar attendees. “If a car comes to you, say, Hey, stop the car!”

Heller agreed, adding that sound effects are critical. “If something falls,” he said, slapping his hand on his desk, “make sure to include that sound.”

Bringing Data to Life While Drawing the Viewer In

Meteorologists aren’t bound to the studio when presenting with AR, although outdoor scenes require a little more planning. Martinez showed webinar attendees how a scene he’d created to present in the field included shadows around objects and by his feet.

When asked about how long it takes to create an AR scene, Heller and Martinez agreed that once practitioners have gained a little experience, even elaborate scenes can come together in a couple of hours. They also reminded the audience that some scenes, such as Heller’s depiction of rain clouds forming over Houston, can be used over and over, or edited into a different story.

Max Reality can also be used outside the meteorology department.

“Every TV station wants to be the go-to source for the latest news, weather, and sports,” Heller said. “Max Reality allows us to deliver a message in a way that you can’t with a standard, 2-D weather map. It literally brings the data to life and in some cases pushes it into the viewer’s living room.”

To learn more about The Weather Company’s AR solution, Max Reality, and see Heller and Martinez in action with their AR scenes, watch the full webinar here.

For more information about Max Reality, please arrange for a demo here.

The television business today is no place for real men and women..It’s a place where diversity and politics rule..: No longer if you have talent and intestinal fortitude and where you speak your mind and have a brain , will you succeed!!! Look at the people who now own local television groups (Gray)..and it will tell you all you need to know..Form over function!!!!

The television today is a tool for shaping public opinion, I never believe tv and advice you the same. I prefer to get information from unofficial source. By the way, let me give you the link of one of the best cv service where you can make your resume ResumesUniverse If you need a job it will be a good start in searching!!

resume services near me!!))

Forum contributions are popular for me and you can visit free solitaire an entertaining game site for you.