Broadcasters racing to keep up with creating content for an expanding array of distribution platforms told The Weather Company their meteorologists needed two things: speed to publish and the ability to work remotely. The weather provider responded with Max Velocity, a browser based platform that enables lightning fast story creation in a tool so easy to use that it expands the potential user pool to non-meteorologists and even sponsors.
By The Weather Company | November 15, 2021 | 5:00 a.m. ET.

The rise of digital and OTT has spurred broadcasters to launch new distribution channels, and as those expand, stations find themselves in a perpetual content-creation race, with linear, mobile, web, social and streaming all demanding their own flavor of programming. Meteorologists, who power a TV station’s most popular news product, can find it tough to keep up, particularly when slammed with severe weather.

It’s no wonder that when The Weather Company engaged in months of in-depth conversations with customers, its executives found stations’ top concerns were speed to publish and, in light of the pandemic and changing worker priorities, remote production.

The Weather Company, an IBM business, has responded to both needs with Max Velocity, a browser-based platform that enables lightning-fast storytelling and an ease-of-use that allows non-meteorologists, such as members of a station’s digital team, freelancers or even sponsors, to pitch in and produce content. 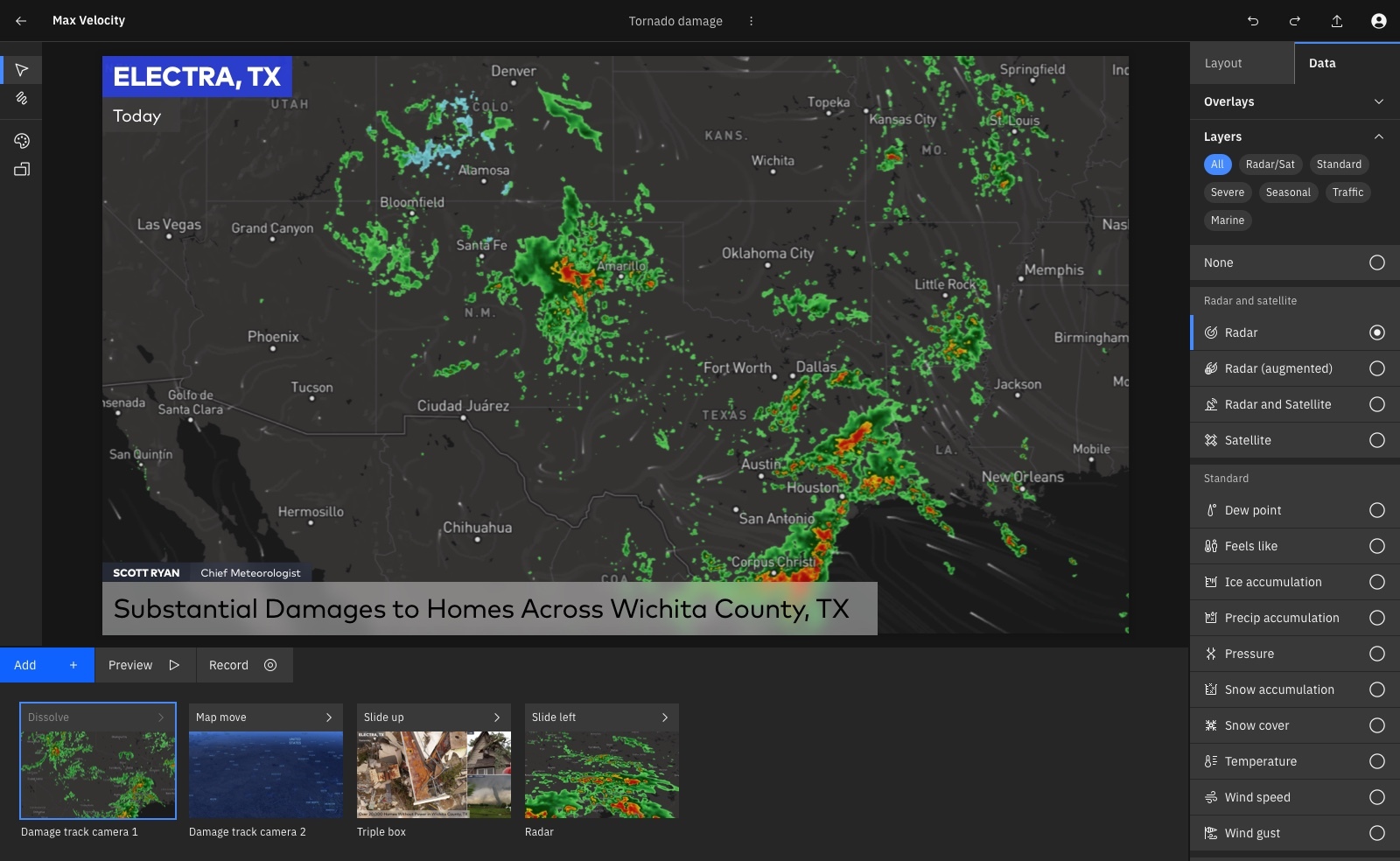 Max Velocity is a “game changer,” said Rodney Thompson, Product Managerat The Weather Company, who spoke during a TVNewsCheck webinar about the future of digital weather. Thompson compared Max Velocity, and the transformational technology behind it, to the launch,of the first iteration of the company’s Max Weather platform. It introduced real-time rendering to the world of weather graphics.

Max Velocity is transforming digital weather storytelling by moving computing power to devices like PCs, iPads and Smartphones. “My phone has more GPU compute power than our first graphics card in Max,” Thompson said. “That’s kind of hard to imagine.”

That GPU capacity enabled The Weather Company to design Max Velocity as a browser-based storytelling tool, the first of its kind. It allows meteorologists and their supporting digital teams to log in — from anywhere — and produce up-to-the-second weather content for various platforms.

“I can publish to mobile, if that’s where a lot of my audience is,” Thompson said. “I can publish  to Twitter, Instagram or I can publish back to the content management system just by doing a CMS push.”

Max Velocity does not replace Max Weather, which still does the heavy lifting for TV newscasts. Instead, it integrates seamlessly with Max Weather’s “on-premise hardware,” to create what Thompson called “hybrid weathercasting.”

“The cloud is kind of the glue layer,” Thompson said. “Max Velocity has its own ability to deliver native experiences, that in some cases are different than what Max Weather can do, and I can pull on-air content into my Max Velocity remote workflows in all new ways.” 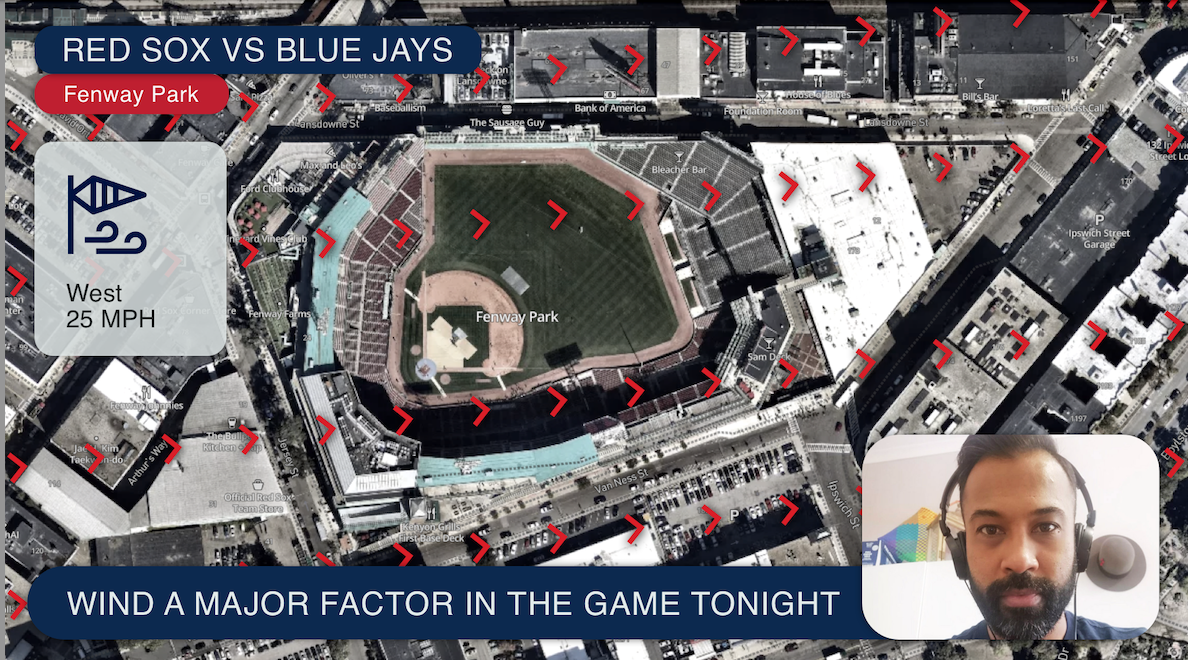 Max Velocity can also access a “vast list of data layers,” Thompson said, and it leverages IBM GRAF “that big investment The Weather Company and IBM have made in modeling.

“It’s too big to list all that’s available, but it’s a really rich data set in Max Velocity,” Thompson said.

Once logged in, a producer can tap templates, and use weather data to build compelling graphics with just a couple clicks.

Demand for digital weather content requires this kind of speed. “The tools have to get more efficient,” Thompson said. “Max Velocity, as its name implies, is really meant to do that quick turn, and look native in the relative platforms, but I can easily change the look of the entire story with a single click that will now, for example, give it a severe-weather look.”

Graphics generation is about as simple as filling in a PowerPoint slide on Max Velocity, but the platform also harnesses graphics of the kind made possible by gaming engines. The Weather Company partnered with graphics agency Trollback to incorporate this technology. 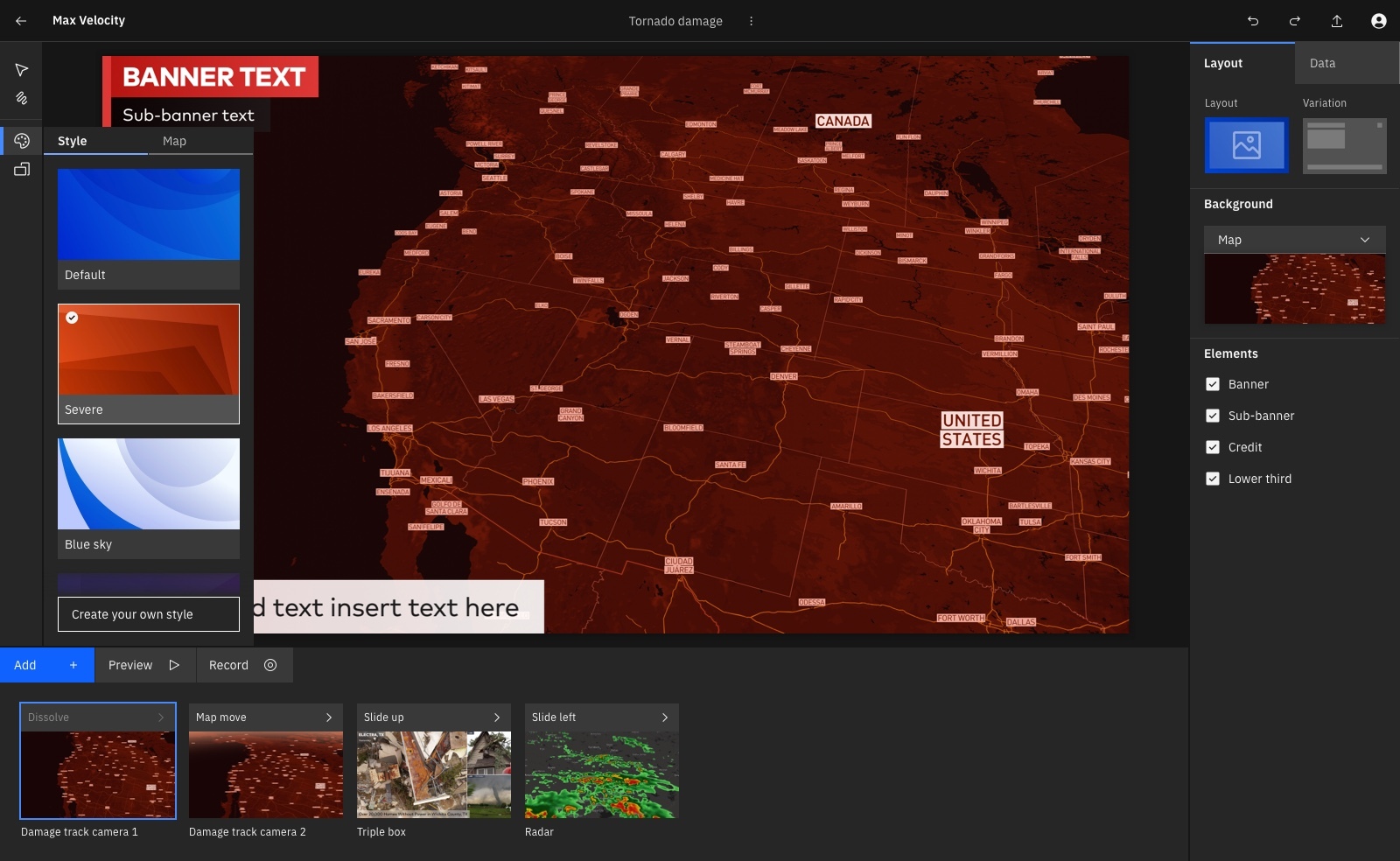 Because it is so easy to use, Max Velocity holds the potential to expand the number of people able to tell weather stories, and not just to members of a station’s digital team. It also opens up possibilities for sponsored content.

“The interesting thing is how the digital team can work with the meteorologists to pull in those highly lucrative sponsors,” Thompson said.

Thompson posed a “native advertising” scenario, in which a producer crafts a story about the Memorial Day holiday forecast, scheduled for the prior Thursday — “something that’s going to get high viewership,” as Thompson described it. The producer devotes a portion of the piece to a local tire company representative reminding viewers to check their tires before hitting the road over the weekend.

“It helps the viewer, but also gets the brand name out there,” Thompson said. “It’s going to make my story better; it’s going to give it more diversity.” To allow a sponsor to create a story, a producer simply has to email them a link, which provides carefully limited access to the tools. “It’s very low friction,” Thompson said.

Max Velocity’s cloud-based, browser-powered platform allows it to operate as a failsafe during disasters. If a hurricane knocks out a broadcaster’s tower for example, producers can use a WiFi connection to file news updates. The same capabilities can keep meteorologists safe from dangerous situations, allowing them to file reports from inside a secure, Wi-Fi-enabled location.

Max Velocity is the first offering to be introduced in the rollout of Max Cloud, another ground-breaking solution. Announced in March, Max Cloud allows meteorologists across a station group to collaborate at a level unheard of with legacy technology.. It also enhances security and provides for disaster recovery.

By moving digital weather operations into the cloud, The Weather Company is offering customers what Thompson calls “a hybrid approach that allows stations to gain access to some cloud workflows while gradually transitioning more to the cloud as they phase out old equipment currently on premise.”

As a cloud platform, Max Velocity is available on a Software as a Service pricing model. “It’s meant to have an ROI that is highly lucrative for our customers.”

Producing quality digital content at a faster rate, that’s cost-effective while cultivating advertising opportunities, all while better-informing consumers about weather, keeping both them and publisher teams safe, Max Velocity might be the most no-brainer tech acquisition a publisher can invest in this coming year.

To see Max Velocity in action visit us here.