The growth in streaming platforms, including Apple and Disney Plus, is a dominant media story. But while streamers performed well at the Globes with Netflix's The Crown and Amazon's Fleabag (starring creator Phoebe Waller-Bridge, above) they didn't shut out cable contenders including FX's Fosse/Verdon and HBO's Succession.
By Lynn Elber | January 6, 2020 | 5:55 a.m. ET. 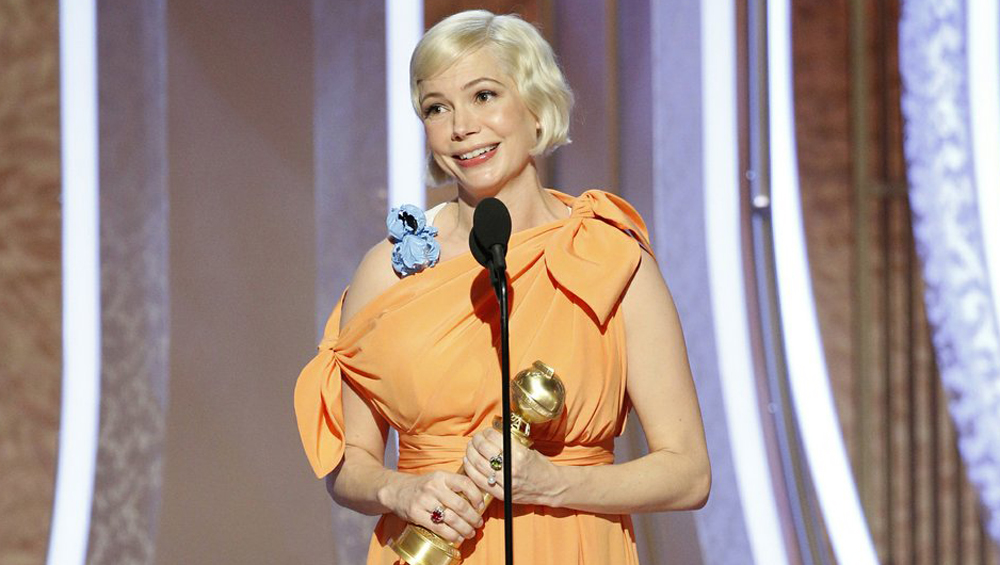 Real-world issues also found their way into Sunday’s ceremony. In accepting the best actress award for the miniseries “Fosse/Verdon,” Williams made abortion and women’s rights the central theme of her remarks.

The actress said her career would not have been possible without “employing a women’s right to choose. To choose when to have my children and with whom,” adding, “When it’s time to vote, please do so in your own self-interest. It’s what men have been doing for years.”

Russell Crowe, honored for his portrayal of Fox News architect Roger Ailes in the limited series “The Loudest Voice,” drew Australia’s disastrous fires into the awards show from thousands of miles away.

Crowe was kept from attending because “he’s protecting his family from the devastating bush fires,” said presenter Jennifer Aniston, who read a statement from him.

“Make no mistake, the tragedy unfolding in Australia is climate change based,” Crowe said in part, calling “for respect for our planet for the amazing place it is. That way, we all have a future.”

For Colman, it’s good to be queen. She won a Golden Globe for her performance as British monarch Elizabeth II in “The Crown” after claiming a 2019 Oscar for playing an 18th-century English ruler, Anne, in “The Favourite.”

“I said I had money on this not happening. For the last year, I feel like I’ve been living someone else’s life. Now I feel like I definitely won someone else’s award,” said Colman, who succeeded Claire Foy as Queen Elizabeth in the latest season of the series.

“Chernobyl,” which dramatized the devastating nuclear accident in the then-Soviet republic of Ukraine, was honored as best limited series, with cast member Stellan Skarsgard named best actor in a supporting role in a series, limited series or TV movie.

Patricia Arquette won best TV supporting honors for “The Act,” based on a true crime.

She credited her co-star, Andrew Scott aka the show’s “Hot Priest,” for their much-lauded chemistry.

Former President Barack Obama also got a shout out from Waller-Bridge for putting “Fleabag” on his 2019 best-of list. “As some of you may know, he’s always been on mine,” she said, playfully, referring curious viewers to season one of her series.

Despite the high praise, Scott didn’t convert his nomination into a supporting actor trophy. But he had starry company in the also-ran category, with Aniston and Reese Witherspoon failing to take home awards for newcomer Apple TV Plus’ “The Morning Show,” Meryl Streep and Nicole Kidman losing for “Big Little Lies,” and Emmy-winning Billy Porter of “Pose” also overlooked.

The broadcast networks, including Globes network host NBC, didn’t have a chance: All of them were shut out of the nominations in an unprecedented sign of the small-screen’s shift to cable and streaming in attention and prestige.

The growth in streaming platforms, including Apple and Disney Plus, is a dominant media story. But while streamers performed well at the Globes with Netflix’s “The Crown” and Amazon’s “Fleabag” they didn’t shut out cable contenders including FX’s “ Fosse/Verdon” and HBO’s “Succession.”

Ramy Youssef won the best actor trophy for a musical or comedy for “Ramy,” a Hulu series about an Arab American and Muslim family in New Jersey.

“I know you guys haven’t seen my show,” he self-deprecatingly told the celebrity-packed ballroom, adding, “This means a lot to be recognized on this level.”

Youssef and “Farewell” star Awkwafina were among the few people of color to win, and the field of mostly white nominees prompted acerbic host Ricky Gervais to label Golden Globes voters as “very racist.”

“Succession,” about a media empire beset by family infighting, won the best drama series award. Brian Cox, who stars as the patriarch, was honored as best actor.

“I want to apologize to my fellow nominees for winning this. I’m sorry. … I never thought this would ever happen to me,” the veteran actor said.

Here’s a list of the winners at the 77th annual Golden Globe Awards:

Best motion picture, musical or comedy: “Once Upon a Time … in Hollywood”

Best actress in a motion picture, musical or comedy: Awkwafina, “The Farewell”

Best supporting actor in a motion picture: Brad Pitt, “Once Upon a Time … in Hollywood.”

Best screenplay, motion picture: Quentin Tarantino, “Once Upon a Time … In Hollywood”

Winner of the Cecil B. DeMille Award: Tom Hanks