There aren’t too many announcer/analyst teams that get to reach 100 games together, but Fox’s Gus Johnson and Joel Klatt will reach the century mark this weekend.

Johnson and Klatt will be on the call for Saturday’s game when No. 4 Penn State visits third-ranked Iowa. The two began working together in 2015, when Klatt became Fox’s top college football analyst after Charles Davis shifted to NFL. 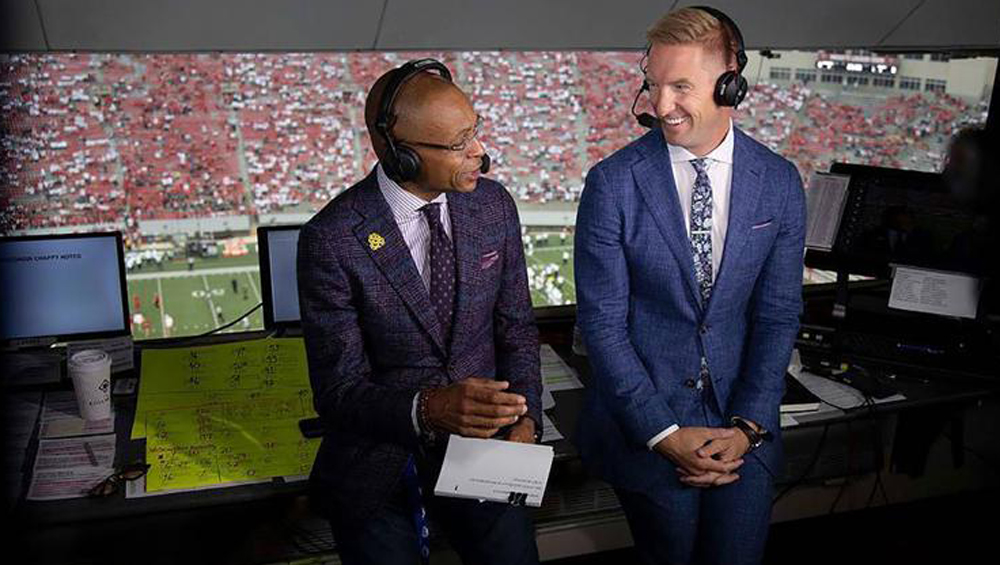 “When that time came where Charles moved over to the NFL, for us, it was almost a no-brainer that we felt like Gus and Joel not only could form a solid broadcast team, but would eventually be one of the best duos of college football. And that’s an evolution we’ve seen over these last 99 games,” said Fox Sports Executive Vice President Brad Zager.

Johnson moved to Fox from CBS in 2011 as the network began building its college football and basketball portfolio. Klatt joined Fox Sports 1 when it launched in August 2013 and spent two years mainly as a studio analyst for college football and hosting “Fox NFL Kickoff.” He did analysis for some Thursday night games on FS1 before he was promoted to Johnson’s partner in the booth.

“I was certainly intimidated, as you can imagine. He was much more established than I certainly was at the time. And his reputation is one of the best play-by-play guys out there,” Klatt said. “I had always wanted to be on a lead game for any network and college football, and then to boot to be able to work with Gus. I was incredibly excited.”

Klatt said there were some nerves the first couple games, but those subsided after he was in the booth for a game between California and Texas and got to see one of Johnson’s exciting calls for the first time — a quarterback draw by Texas Jerrod Heard for the touchdown.

“He went to the Gus stratosphere, and I had goosebumps. I’m in the booth thinking to myself like ‘Wow, what an amazing job that I have to sit here next to this guy,'” Klatt said.

While Klatt might have been intimidated at first, Johnson said that he felt like they developed a great rapport from the start.

“He’s such a knowledgeable person and a kind and considerate person so it was easy to develop a natural organic relationship with him from the very beginning,” Johnson said. “What has been great for me, I’ve been in this for a long time but to feed off the energy, exuberance and youth and to rely on him as a knowledgeable and enthusiastic part of the team was easy from the very beginning.”

Johnson and Klatt’s profile has been elevated since Fox decided to go mostly with noon kickoffs for its high-profile games. Since “Big Noon Kickoff” started in 2019, Fox has been able to consistently market its big games in that spot.

Going into this week, Fox is averaging 4.03 million viewers for college football, which is a 32% increase over 2019.

Ironically, Johnson and Klatt’s game on Saturday will not be at its usual noon slot. The game will kickoff at 4 p.m. Eastern, and is one of the few later kickoffs that will showcase its top crew. It also helps that the CBS featured Southeastern Conference game between top-ranked Alabama and Texas A&M is in primetime.

“I think it helps a lot because people know when we’re going to be on. Having a game at noon is a solid time slot,” Johnson said. “I think it’s helped us build an audience. I love the branding of it being noon and it has helped us on the college football landscape.”