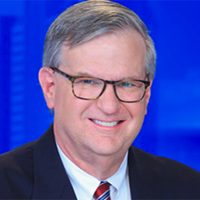 Ken Foote, the director of programming for CBS’s Dallas duopoly of KTVT and KTXA, is retiring Friday, June 12.

In 1978, he started his TV career at WGHP Greensboro, N.C. He was transferred to Tampa in 1981 to the corporate office of its owner, Gulf Broadcast Group, where he was a financial analyst.

He served as assistant program director at KOOL Phoenix in 1983.

In 1984, Foote started his longtime career in Dallas-Fort Worth, where he has since been the director of programming for five stations: KXTX, KTVT, KDFW, KDFI and KTXA.

He was originally with KTVT during its independent days from 1987 to 1993, and then rejoined in 2004 after KTVT became a CBS O&O.

From 2008 to 2010, he did the Saturday evening shift on Fort Worth’s KTFW-FM, spinning classic country music.

Foote holds a bachelor’s degree from Southern Methodist University and an MBA from the University of Texas at Austin. He is a member of the Country Music Association.