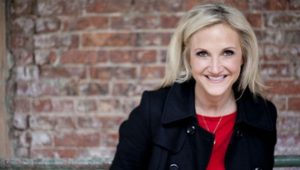 Sony Pictures Television (SPT) announced today that The Mel Robbins Show, its new one-hour syndicated talk show with Mel Robbins as host, has been picked up by Nexstar Media Group.

Last fall, SPT aligned with Tribune Media to launch the program, and with the addition of Nexstar Media Group, the show will clear 90% of U.S. television households.

“Mel’s already built an enormous fan base through her social media platforms, best-selling books and by being the No. 1 female speaker in the world,” said John Weiser, president, first-run television, SPT. “Adding Mel’s television show to these already established platforms will enable her to speak to millions of people every day. With Tribune and Nexstar Media Group as our strategic partners we will be able to bring Mel’s transformative vision to new audiences.”

“We admire Mel Robbins, and her ability to connect with families all across this nation,” said Tim Busch, president, Nexstar Broadcasting Group. “Through her distinctive style and ability to provide straightforward every day advice, Mel’s engagement and connection with America is unparalleled. We are proud to support her and her newest endeavor. To that end, we look forward to working with Mel and the launch of the next exciting voice to daytime television.”

Robbins said: “For years, I’ve seen the impact of the work I’ve been doing with people on a one-on-one basis. It’s been my privilege to help transform their lives. I am excited to now have the opportunity to share my coaching and life strategies with millions of people, giving them the tools to unpack what gets them stuck and push them through difficult moments.”

“Mel Robbins is a unique voice with an authentic message for today’s daytime viewers,” added Holly Jacobs, EVP, reality and syndication programming and development, SPT. “She’s a tough, smart, funny and deeply skilled life strategist. I’m confident that her no-nonsense, optimistic, motivational advice will speak to people everywhere. I’m so excited to introduce her to the daytime audience.”