The syndie star and her husband have pared down her talk/cooking show to a minimalist, makeup-free affair from their home kitchen in the Adirondacks. Shooting on iPhones, cooking largely from pantry staples and taking personal questions from viewers in every episode, Ray’s producer says she’s “the right woman for the right moment.” (Photo: Rachael Ray)
By Michael Depp | April 29, 2020 | 5:30 a.m. ET.

For weeks now, the talk show host has been holed up in her Adirondacks home, shooting her eponymous show remotely. She’s bereft of an in-person crew except her husband, John Cusimano, who has become her “camera person, producer, director, the whole shebang. Her dog, Isaboo, is “our studio audience of one.”

This kind of arrangement has become the new normal for most talk shows and newscasts, but Ray’s show adds another layer of complexity into the mix: the signature DIY cooking that catapulted her to success more than 20 years ago.

Hence the potting bench. “We have a little rotating system there and we just keep putting food outside,” Ray says. “Everybody uses that bench. They drop stuff out there and we leave stuff there for everybody else. It has become our staging area.”

Ordinarily in Ray’s New York studio in Chelsea, the show’s culinary team would manage workflow staples like ordering ingredients, prepping them and swapping out dishes when the show runs long. Only now, “I literally have to do everything,” Ray says.

Along with a little help from her close-knit local group of family and friends, especially once Ray’s only car had to go into the shop. Her sister does many of the store runs that aren’t otherwise delivered by an area grocery. Her friend Susan leaves bunches of flowers. And Ray, in turn, shares the meals she spends the day preparing for her show out on the potting bench.

Sometimes there are a lot of them. “My personal best since we have been here is 14 setups and seven meals in one day,” she says. “So, no shortage of food.”

Nor any shortage of activity for Ray, whose days typically begin around 5 or 5:30 a.m. and often don’t end until 11 p.m. In addition to her syndicated show, she has also been producing content for her Instagram TV channel, a WNYW New York food fundraiser and segments for The View. “Plus, we have to do our regular jobs, our businesses, and our philanthropic endeavors have taken up quite a bit of our time lately,” she says.

Those philanthropies, including The Rachael Ray Foundation and the Yum-o! Organization, said earlier this month they are collectively donating $4 million to help fund food and nutritional programs for kids and families along with COVID-19 relief efforts for animal welfare (the funding will come through a portion of sales from many of Ray’s products, including pet food and crockery).

Normally a workaholic, it isn’t so much the endless stretch of work-filled days that were an adjustment for Ray. Instead, it was opening up the doors to her upstate New York home, one of the few private refuges for a woman whose celebrity was otherwise built on her easy intimacy with audiences and bountiful disclosures of personal detail.

“That house upstate has always been her sanctuary and she would never allow us to shoot there. I have asked a billion times,” says Janet Annino, Ray’s longtime senior executive producer and showrunner since CBS Television Distribution’s Rachael Ray launched in 2006. “This time she was the one who said we need to tear down that wall and open it up to the world.”

Ray is glad she did. “The very first day we shot here it weirded me out a little bit, but now I find it very comforting, quite frankly,” she says. “It makes me feel good to share my home with people because it is that kind of time where you want to put your arms around everybody.” 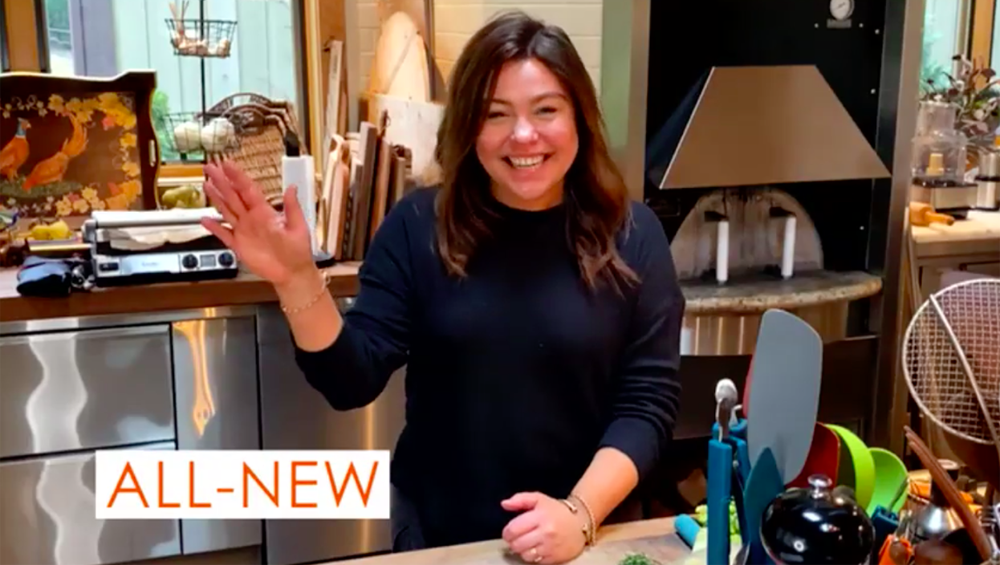 Ray’s show has pivoted to be that virtual embrace in ways large and small, becoming “a little bit of a shape shifting thing” in its new incarnation, Annino says. For one thing, Ray has taken her occasional studio audience question segment — “Q & Rays” — and expanded it to a daily affair, taking questions through social media. “It is just us, John making a cocktail and me talking to myself in the kitchen,” she says. “We get to say every thought fully and share everything that is going on in our lives more completely than it would otherwise be in a TV show where you have eight acts and six of them are booked with guests.”

The guests are still there via teleconferencing, but the interviews have gotten more expansive and personal. Musical segments have crept back in on Mondays, with Ray and her husband tapping friends for the slots. And viewers will notice other changes, such as a new graphics package for the home-based show and a new theme song from Cusimano and his bandmates to underscore its folksier shift.

But it’s the food segments, utterly stripped of veneer and the breezy economy of a studio kitchen, that best define the show now. The kitchen is cluttered. Ray pads around in her slippers. “I don’t like to wear fancy clothes at home or high heeled boots or shoes,” she says. “I don’t like to wear makeup” (though she does concede missing her hairdresser friend Patty’s daily effort to “make it all poofy and nice”).

Cusimano shoots all these segments on a pair of iPhones, often coming in closely over Ray’s shoulder, ducking in or arching away as she works between kitchen island and stovetop, a domestic dance.

“He is a kind of natural,” Annino says. “He’s got very good instincts as a cameraman. The way he shoots her, it’s sort of an intimate connection between the two of them.”

Production isn’t all so fluid these days, though. Files take twice as long to upload as they normally would from the show’s home base, Annino says. “We don’t have as many bells and whistles and as many edit bays functioning,” she adds.

For Annino, the process harkens back to the show’s beginnings, where 16-hour days were the norm. “It’s like we started a whole new show with less resources and less staff, but the same sort of concept: Rachael and the accessibility she brings to the kitchen and to the world, just trying to build it from the ground up in a whole new way.”

And that way revolves around Ray being “the right woman for the right moment,” making audience comfort food on multiple levels, Annino says. That moment will likely extend to the show’s post-pandemic future.

“The more stripped-down version has been really appealing to people,” she says. “I suspect we are going to incorporate a lot of that into the new season.”

That includes more of Ray’s home kitchen, but she’s learned she’s OK with lifting that last veil in her life.

“I feel like letting [viewers] into our home as close as we can get to them,” she says. “Let’s have some fun and a little conversation and distract ourselves from the horrible sadness that exists in the world right now. If we can give people a chuckle or a few minutes of escape from that, it’s comforting.”