The awards program will be accessible online and available to air on local television and radio stations starting Aug. 22. The annual awards celebrate the vital role of local radio and television stations throughout the U.S.
By Mark K. Miller | June 15, 2020 | 3:30 p.m. ET. 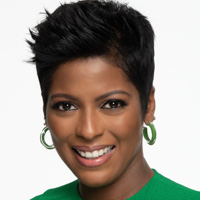 Journalist and television host Tamron Hall will host the 2020 NAB Leadership Foundation Celebration of Service to America Awards. The 2020 event will be a recorded, hour-long program accessible online and available for broadcast radio and television stations to air within 30 days starting on Aug. 22.

Through a partnership with Hollywood’s leading entertainment marketing company, Trailer Park Group, the NAB Leadership Foundation will provide a broadcast-quality program showcasing the vital role of local radio and television stations throughout the U.S. Winners will be announced during the program, and all eight category finalists will be highlighted for their excellence in community service.

Tamron Hall is the host and executive producer of the daily, syndicated talk show Tamron Hall, which premiered in September 2019. In its rookie season, the show won a Gracie Award and was nominated for three Daytime Emmy Awards, including one for Hall in the Outstanding Informative Talk Show Host category.

In addition to her talk show duties, Hall has also been the host of Deadline: Crime with Tamron Hall on Investigation Discovery since 2013, which takes an in-depth look at crimes that shocked the nation.

Previously, Hall was the first African-American female co-host of NBC’s Today and anchored MSNBC Live with Tamron Hall. Her special NBC News report, Education Nation: Teacher Town Hall, was nominated for an Emmy Award in 2011, and she served as a correspondent for the NBC News special The Inauguration of Barack Obama, which won an Emmy for Outstanding Live Coverage in 2010.

“Tamron’s impressive career as a local and national broadcast journalist, combined with her philanthropy and uplifting personality, make her an ideal host as we reimagine the Celebration of Service to America Awards,” said NAB Leadership Foundation President Michelle Duke. “Her charisma and professionalism on and off camera are sure to make for a memorable event honoring broadcasters’ community service.”