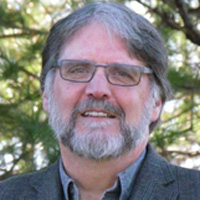 Irving Kristol once defined a neo-conservative as “a liberal mugged by reality.” A recently published paper by two FCC economists may soon create a similar feeling among the federal regulators at the FCC and the Antitrust Division of the Department of Justice.

In particular, the FCC’s economic study demonstrates that, given the high cost of producing local news, the current local ownership regulations for many television markets may be counterproductive by depressing the amount of local news programming that otherwise could be produced. This is especially true in small and mid-sized markets.

Government policies should not be making it harder for broadcasters to deliver quality local news to their communities. Hopefully, this research will cause federal regulators to rethink some of their long-held views.

The FCC economists analyzed local television news produced across the country in markets of different sizes. The FCC’s research follows up research by this author (supported by Gray Television and submitted to the FCC) on the provision of news programming by Gray’s stations in its local markets, including many markets where Gray has added stations or networks.

Taken together, the FCC’s research and my study highlight the high costs of providing local news programming and how the government could promote the production of more local news simply by relaxing its ownership rules.

The FCC economists, in a rigorous statistical analysis, successfully estimate the number of independent local news outlets that a market can realistically be expected to sustain based on market size (i.e., number of television households in the market). Not surprisingly, the authors find that “market size appears to be the key driver” when determining how many competing local news outlets are economically sustainable in a market.

Yet, despite the clear economic differences between large markets and small markets, FCC rules treat all markets the same — as if every market were as robust and healthy as Washington or New York. Current FCC rules prohibit any combination of two of the top four rated stations in every television market across the country from New York City to Glendive, Montana — regardless of whether those top-four rated stations can afford their own local news operation. The FCC’s economic study provides the clearest proof yet that it is time to rethink that approach.

The FCC’s findings are consistent with the results I found in the Gray Television analysis. Put simply, small and mid-sized markets do not produce enough revenue opportunities for multiple independent broadcasters to earn a profit and overcome the high costs (both capital and operating) associated with the provision of local news.

In my analysis, I found with capital equipment and operating expenditures of this magnitude, a station must generate significant annual operating revenue to recoup this investment. In many mid-size and small markets, the advertising base is not large enough to support multiple stations in the market providing a substantial number of hours of local news programming.

The FCC study also examines other variables that could affect the provision of local news in markets of various sizes. It shows that the percentage of Hispanic population affects the likelihood of market offering more local news options, suggesting that “news operations differentiate themselves to serve different segment of diverse markets.” In other words, when the marketplace provides enough incentive for more news operations, local television stations will deliver.

Surprisingly, the FCC economists find that higher average personal incomes in a local market have a negative effect on the number of local news operations. The authors attempt to explain this anomalous result by postulating that “high-income consumers do not watch local news on television at high rates and may instead get local news from other sources or may prefer national news.”

In other words, more competition makes it more challenging for local broadcasters to attract these higher-income viewers and maintain a profitable news operation. The availability of many other sources of news that local stations must compete has long been part of the argument for relaxing local television station ownership rules.

The chart below from that study shows the magnitude of the weekly change in the provision of local news programming with and without a consolidation event (e.g., acquiring another local television station or network affiliation). 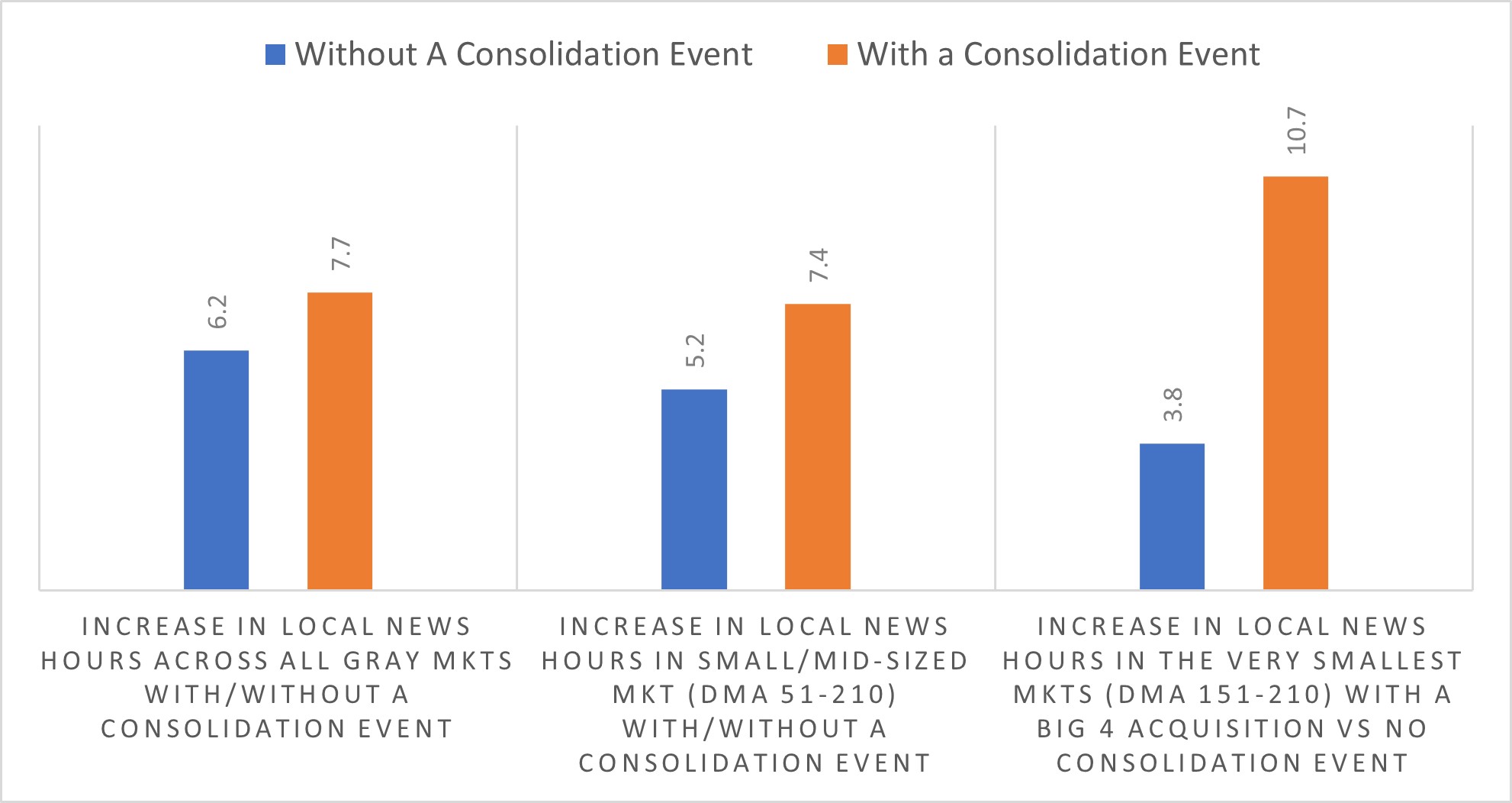 Because of increased competition and the high costs of producing local news, the FCC study authors suggest that policymakers should reconsider how they evaluate proposed combinations of local television stations.

They write, “… a merger that eliminates a source of local news may be optimal, even though it reduces viewpoint diversity, if the merged entity improves the quality or increases the quantity of local news programming, strengthening localism.”

In other words, the FCC’s own economists are acknowledging that the existing local ownership rules might harm localism by constraining the amount of local news that can be produced in a market. The Gray Television news study reinforces this finding by showing the positive benefits that accrue from a combination of local television stations in small and mid-sized markets. Hopefully, the FCC has been mugged by reality and recognizes that it is time to loosen those rules.

Yeah, right… in fact very Right. Increased ability to ‘collect’ large numbers of local stations will not improve ‘local news’ one bit. All it will do is allow those existing monopoles to have even greater ability to monopolize The News.

Various methods to prevent monopoles in markets have been eroded over the years, mostly under Republican administrations, and the last Administration was no different.

Of course when the ‘monopoly’ is in the form of a social media giant, and is perceived to limit ‘hate speech’ masquerading as ‘free speech’, all of a sudden ‘monopolies’ are a bad thing, in need of regulation.

From the wiki on say, Sinclair Broadcast Group, one finds it owns some 193 stations, in 100 markets (which necessarily means it owns more than 1 station in some markets, in fact nearly 2 on average), and as for ‘local news programming’:
—
A 2019 study in the American Political Science Review found that “stations bought by Sinclair reduce coverage of local politics, increase national coverage and move the ideological tone of coverage in a conservative direction relative to other stations operating in the same market.”
—

The salient points being “…reduce local coverage of local politics” and “move ideological tone… in a conservative direction”.

The ‘fairness doctrine’ concept having been tossed years ago, and relaxed station ownership limits, has allowed not only a narrowing of ‘coverage’, but allow allowed for political views of the ‘management’ to be come the ‘coverage policy’ of the stations, a cross a wide swath of ‘virtual monopolies’.

The ‘umbrella’ of “we can’t make a buck if we aren’t allowed monopolies to form”, has been the rallying cry of these large station owners for years now.

While in terms of the Federal it may be that ‘monopoly’ considerations apply to entities that have markets that are ‘nation wide’, and despite a company owning 193 stations, in the case of Sinclair, is not seen as a ‘monopoly’, since none of the markets cut a wide swath of territory across many states, the fact that in an region, having only one station, it is in fact a monopoly in that region.

The ‘economics’ analysis also fails to note that as TV Broadcast was setup, it was setup to included a ‘service to the public’, which may not meet a ‘pecuniary’ goal of ‘profit’.

I agree with Mr. Clark. The FCC economists, really???? You mean the ones hired by former Verizon lawyer and former head of the FCC, Ajit Pai? Sorry mate, not even close to an arm’s length economic study of those markets. I am wondering, what is it about fascism that intrigues you so Mr. Fratrik? Deregulation is the father of fascism, hasn’t recent history bore this out in spades? C’mon man! Reagan started an aggressive deregulation campaign that included the media. In 1982, there were 54 major media companies, today there are 6. This deregulation was also a global phenomenon. Look at the stock market to see what dereg has done. In 1980, there were just under 9,000 companies listed on the NYSE, today there are about 2,950. Is it any wonder why the stock market is no longer a harbinger of what is happening in our economy? As part of changing ownership rules, we allowed foreigners to buy media and broadcast entities, that gave us tabloid publisher, Rupert Murdoch an in to start Fox and what has Fox News done for the USA? The propaganda machine has accomplished classic destruction of trust in anything anybody says anymore. And you want more of this? You guys really have to tell me why you want dictatorial power structures in every walk of life. I really can not understand it.

We can not have more of this and survive as a democratic country: